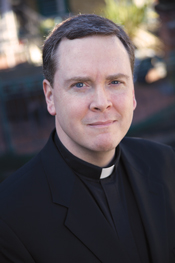 I must admit that I have never been a big fan of the work of art that graces the cover of this week’s issue. “Why, then, is it there?” you might ask. Well, for starters, America is not a totalitarian state. We’re not exactly a democracy either; still, it’s both charitable and prudent to pay a decent respect to the opinions of one’s colleagues, especially when they’re as smart as mine. And, truth be told, quite a few members of team America like the piece. I don’t see it, but I’m a bit old fashioned that way. My reaction to Dalí’s modern depiction of the Last Supper is something like the punch line to the joke about how many Irish mothers it takes to screw in a light bulb. The answer: What’s wrong with the old one?

Indeed. What’s wrong with the “old” Last Supper, the one that Leonardo da Vinci gave us, that triumph of light, color and form that has inspired countless artists, Christian and otherwise, long before Dan Brown “cracked” its “code”? The more or less straightforward answer, of course, is that there is nothing wrong with the old one; it’s a masterpiece. It’s just that it is neither the first nor the last word on the subject. Artists in nearly every century since the second have taken a crack at depicting that fateful, world-changing night in Jerusalem, a seminal event in the life of Jesus and the church.

That is as it should be. For “in his gracious goodness,” as the fathers at Vatican II put it, “God has seen to it that what he had revealed for the salvation of all nations would abide perpetually in its full integrity and be handed on to all generations.” In other words, every generation of Christians must make its own the timeless truths of the Scriptures and tradition. In that sense, the new evangelization that we’re hearing so much about is not really new at all; it is the work of the church in every age. As Archbishop Rino Fisichella points out in an article on America’s Web site (dated Oct. 15), the new evangelization invites Catholics, not to reinvent Christianity for a new century (a preposterous notion if there ever was one) but to “become missionaries so that the joy that has been communicated to them and that has transformed their lives may allow others, too, to encounter the same source of love and of salvation.”

Jesus Christ is that source of love and salvation. At the heart of our faith, then, is not an idea or a philosophy or even a theology, but a person. Our faith is not in a proposition but in the One who is the way, the truth and the life. The proclamation of the Gospel in any age is existentially unintelligible in the absence of such a personal dimension. It is also dangerous; Robert Ellsberg reminds us of just that in this week’s issue: The tragic story of some of the 16th century’s “new evangelists” reveals that when Christians confuse the what of faith for the who of faith, then we also tend to forget who we are as people of faith and, unfortunately, who our neighbor is.

When God ceases to be personal and is instead merely a thought or idea, then God is no longer a subject, but an object. As Pope Benedict has written, “the arrogance that would make God an object…is incapable of finding hi m. To think like that is to make oneself God. And to do that is to abase not only God, but the world and oneself too.”

The new evangelists—all of us—would do well to remember that. We would do well to remember that the most powerful form of evangelization is our account of the joy that is within us. We cannot fake that; and while it takes different forms at different times for different Christians, it ultimately comes from the same source, the same person. In a way, both da Vinci and Dalí got it right: Jesus is in the center of both pictures—exactly where he should be.

Jesuit priest, Matt Malone  AMERICA  MAGAZINE new editor, speaking of Dali’s “Last Supper” in “Many Things,” much prefers da Vinci’s rendition. Obviously he’s not a devotee of   abstract,   or modern art and I share his preference, although some of the stuff is interesting, as is Dali’s “Last Supper.” I think Dali  captured the warped “moment” the moment of head shaking by  the Eleven, the twisted sense of shock that entwined that “Last Supper”- I prefer “First Eucharist”  when Jesus said, “One of you will betray Me!” It must have been an exceedingly tense moment, which if I were at that table, I would have reach for my Prilosec (miraculously provided by Jesus in one of his unknown miracles!) relieving GERD! da Vinci's work was more "churchy" not a bad thing at all and beautiful.

Abstract and modern art are hard to digest. Once at the Whitney Museum of Modern Art where I bartended as a second job to help support my family, like being able to send our  kids to Catholic Schools, I saw a blank canvas in white, displayed and named. “Blank Canvas.”  Good heavens! That’s art? At least Dali breathed some believability into his “Last Supper” abstractly speaking.
8 years 8 months ago

I feel it necessary to post this addendum to my #1 post, because Editor’s Malone’s insights were not focused on Dali vesus da Vinci, which my post did, but rather on Jesus as  central to how we think, and what we say and do. Yes, Jesus is the truth, the way, the life, or as former priest Fr. Corapi used to say “Truth is not a thing – it is a person and his name is Jesus Christ!”  Exactly what Fr. Malone’s focus was. Artistically expressed each in his own way,  Dali and da Vinci did, I think, make Jesus “central.” So, maybe this addendum is redundant?

8 years 7 months ago
Dear Father Matt,
I am 71 year old practicing cradle catholic, an ordained priest who has married, one who prays quietly every day, and studies Scripture and theology constantly.  Your essay hits the nail on the head for me, and for, I imagine, for many.  Who is the ineffible God?  How can pure Spirit be a Person?  Lately, especially, that is the question that hunts me.    Jesus, the Christ, is the incarnation of the Person of God, of course.  And, thanks be to God!(?) for that.   I suggest that homilies directed at this most basic question would be  helpful.  Thank you, Matt, for your gracious help.