"That Man Is Me": My life-changing encounter with a fictional French bishop 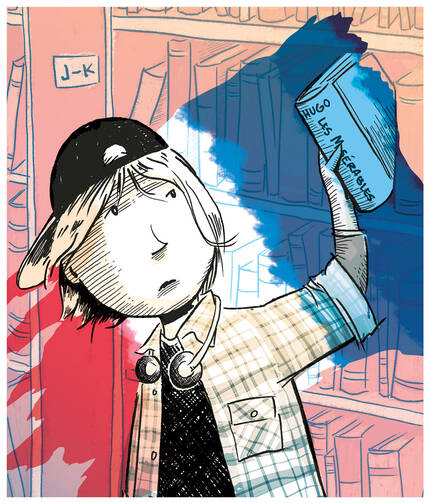 Twenty years ago, I met an extraordinary man who changed my life. He softened my heart, awakened my imagination and opened new possibilities. He inspired me to think about life in a new way. He made me want to be a priest. Thanks to him, I am now in my 14th year of ministry. Remarkably, this man never really existed.

I speak of the incomparable Monseigneur Bienvenu, the bishop of Digne, from Victor Hugo’s Les Misérables. The new movie has revived the old thrill, as I gratefully reflect on how this story once shook me to my core.

It was the early 1990s. I was at that threshold between boy and man, marked by the promise of so many paths and so much uncertainty, when a life can go anywhere or nowhere. I was a sophomore in college, awakening from the benign cluelessness of adolescence, still groggy but ready for destiny to come knocking, making me some irresistible offer.

It came knocking in the form of one Jean Valjean, on the humble door of an old cottage, after every other door refused him. It was answered by the warmth of one saintly country bishop, was repaid with treachery and, finally, was closed with mercy. Valjean was not the only one who left that day a different man. Like Valjean, my life was forever changed by that encounter.

My relationship with the bishop of Digne and Les Misérables began on a grim March day. I was home for spring break, hanging out with my friend Brooks playing cards. At some point he went to call his girlfriend. Bored with the music we had on, I decided to give his “Les Misérables” soundtrack a listen. Back in high school, our class had gone to see the musical, but I’d missed it because I had been out sick. My classmates had raved about it, even the cool kids.

Guessing that Brooks would not soon return, I absently shuffled the cards. Every now and again, a line stood out. “He treated me like any other/ he gave me his trust/ he called me brother.” “I dreamed a dream in time gone by/ when hope was high/ and life worth living.” General outlines of the story emerged as I perused the libretto, my interest growing. Brooks returned. We went back to our card game.

Fast forward to the following summer. I had begun to suspect I had a mind and a soul, and I thought I needed a good read to test my theory. I went to the public library and kept returning to this enormous hardcover copy of Les Misérables. The book seemed to cry out, “Come, have a look, won’t you?” I objected to its rude length: “There is no way I am reading you.”

Fortunately, the book won. I took it off the shelf and opened it timidly, with a shyness and shame I cannot explain, even to this day. Perhaps I was confounded by the disproportion between my mean and low ignorance and this great literary classic. Such books were not for the likes of me, I thought. Inside, though, were some glossy pictures from the Broadway musical, with pretty girls and interesting captions. “All right, I’ll check you out,” I grumbled. “But that doesn’t mean I’ll read you!” I figured I’d flip through the pages, read some scenes and be done.

It started slowly, page after page describing the bishop’s day-to-day life. “When does he meet Valjean?” I thought impatiently. Even so, I was fascinated. The bishop traded his mansion for the shack next door, which was being used as a hospital. He made house calls around the region, showing courtesy and honor to all, including the village atheist. He lovingly tended his garden, and to critics who called his work a waste of time he replied: “The beautiful is as useful as the useful. More so, perhaps.” He arrived late for the cardinal’s visit, due to a pastoral call, and rode up on his old donkey, begging the mortified prelate’s forgiveness for having the effrontery to ride the same beast as our Lord rode into Jerusalem. By the time Valjean finally knocked on his door, I not only knew this Bienvenu; I loved him.

Valjean is wary of the welcome. Because of the humble trappings, he mistakes the bishop for a simple country priest. Bienvenu offers him food and table fellowship. He repeatedly calls him “Monsieur,” raising Valjean’s head ever higher. “Ignominy thirsts for consideration,” Hugo writes. When Valjean awakens to make off with the silver, he is nearly converted by the sight of the righteous man in his sleep. Nearly.

The cops catch him with his contraband cutlery and drag him before the bishop, who with a word can send Valjean back to prison for life. Instead, he gives truth to Valjean’s lie that the silver was given and offers him the candlesticks too. Valjean is left gaping with a face that “no human tongue can describe.” The police leave. Valjean stands before the merciful gaze of his benefactor. Bienvenu calls him his brother and tells him he has bought his soul for God with the silver; now he must go, using it to become an honest man.

Victor Hugo’s masterful account of Valjean and the bishop moved me almost as much as it moved Valjean. For the next thousand pages, Valjean strives to become what Bienvenu saw in him and to be faithful to what was given. Sacrificial love follows like concentric ripples from that first “stone” dropped in the water, the bishop’s mercy toward Valjean.

I read Les Misérables in a week. It was the perfect book at the perfect time, with soul-shaking impact. For a long time afterward, I went over and over it in my mind and in my heart.

One day I had a revelation: Monseigneur Bienvenu never knew! The heroism of Valjean’s subsequent life was unknown to the bishop. Fantine, Cosette, Marius, Eponine, the Thénardiers, Gavroche, Javert, the barricades, the students, the wedding—all unknown. The bishop sent Valjean off with his silver and a promise, never to see or hear from him again. For all he knew, Valjean went back to his old ways. And yet it did not seem to matter. He treated Valjean as he treated everyone: as Christ would. Bienvenu was the unknowing mover of all that was to follow. But for his act of mercy toward Valjean, the whole beautiful story would not have been.

This was when it hit me. I thought of the bishop, and the impact he made and what his priesthood meant. I can remember praying, “Lord, if that’s what it’s about, if my life can do that…sign me up.” And the rest, as they say, is history.

A later scene describes a man kneeling reverently in the night outside the bishop’s home. We are made to guess that it is Valjean, paying his respects. Twenty years later, may this humble telling of my own encounter with the bishop of Digne serve as my reverent bow, a token of my gratitude and love.

Rev. Charles Klamut is a priest of the diocese of Peoria, Il.

Show Comments (
9
)
Comments are automatically closed two weeks after an article's initial publication. See our comments policy for more.
Margi Sirovatka
9 years 5 months ago
Dear Rev. Klamut, “Mille mercis” for your beautifully crafted and touching article about the influence of Victor Hugo’s Monseigneur Bienvenu in your life. The recent film release has moved me to read Les Misérables in French for the first time. I venture to say that even if one were to only read this part of the book, our lives would be profoundly affected. Let us ponder Monseigneur Bienvenu’s habit of wandering his garden at night, thinking of the grandeur and presence of God, seeking not to comprehend the incomprehensible…not studying God; but rather being dazzled by Him. Margi Sirovatka Riverside, IL
ian palmer
9 years 5 months ago
Dear Rev. Klamut, my experience parallels yours. When I was a young man, I kept recalling a story about a priest giving away silver candlesticks, but could not recall where I read it. The silver candlesticks never left me, and I think now that God lodged the story in my soul. I came into a deep relationship with Christ years later, at the age of 26. Still later, when I first saw Les Miserables in the theater, I realized the candlesticks originated in Victor Hugo’s book which I had read during my teenage years at college studying physics. I have seen LM several times, and it has been my favorite play. I will reference your beautiful words in my next blog called "Les Miserables in my life" http://www.iandexterpalmer.com/
Kyla Rune
7 years 11 months ago
Much obliged concerning taking this chance to examine this, I like researching this subject. I guarantee this would be gainful for the vast majority of the individuals. This article gives the light in which we can watch the actuality. On the off chance that conceivable, as you addition data, please upgrade this web journal with more data. visit: http://moresoundcloud.com
Sandy Nelson
6 years 8 months ago
This is a great site for understanding every importance towards having more facebook likes.
Ruth Ferrer
6 years 8 months ago
You must know the worth of followers, specifically when it comes to marketing.
Roger Aldridge
6 years 7 months ago
You can upload your video on YouTube and see how it can help your business grow.
Daniel Monfort
6 years 5 months ago
You must be aware of how Facebook can give you an edge in your business online.
Mh Shamim
5 years 4 months ago

Hey! Most of the great ways you can follow to boost your business on online. Facebook is the best to rank your business or products. You will get super targeted clients for the lifetime to promote your business. They always interact with your on you business facebook page by fanpage likes.
Another one twitter. You know millions of people stay here likes facebook. Also, Reddit is one of the best ways. Yes. Another and best way is youtube. Let me know if you have any cool ways to boost your business or product online. Thanks for share this kind of article. I will share with my community then you will get more some effective ideas. have a great time.

Thanks for your interesting article. Here is a great deal to buy facebook likes