Making Room: Learning to love my neighbor in New York 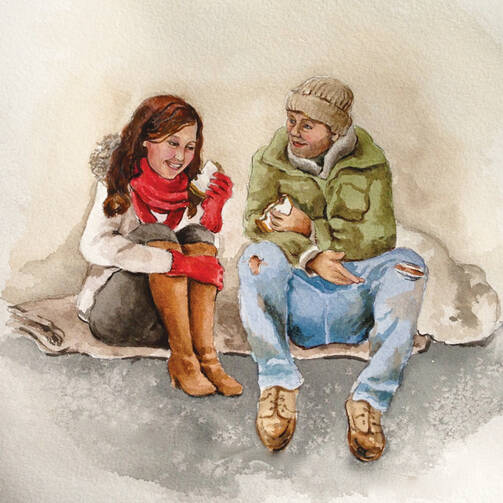 One cold winter night I bought a tuna sandwich for dinner at a pharmacy. I was hungry and late for a meeting and was feeling sorry for myself for having to eat dinner at a place that also sells stockings and cold medicine. I passed a man curled up under some blankets on the street. “Got anything to eat?” he asked, clearly seeing that I did. I took out half of the sandwich and gave it to him. But as I walked away, doubts filled my head: Should I have given him the whole sandwich? Should I have bought another one just for him? Was he even hungry?

It’s not easy to determine the best ways to act with kindness and mercy. Of course St. Basil the Great, of the fourth century, put it quite simply:

The bread which you do not use is the bread of the hungry; the garment hanging in your wardrobe is the garment of him who is naked.... The acts of charity that you do not perform are so many injustices that you commit.

That’s a challenging statement. My lack of action can be, in itself, an injustice. But how do we know when and how to act? It seems like too much, sometimes, to feel for every person you see and to give to people in need not knowing what they’ll do with the money. It is difficult to see everyone as an individual.

In the summer before that cold winter night, I had been threatened by a man who had locked himself in the wheelchair-accessible bathroom at church. I’d knocked on the door, and the man had emerged, a flurry of baggy, ragged clothes and unkempt hair. Angry, screaming and delusional, he believed his feet had been burned by acid and that I’d been continually bothering him. His arm was raised and his fist clenched tightly as he started at me. All I can remember about that moment is thinking, I’m about to get punched in the face, although I made no attempt to move. Sensing this, my then-boyfriend stepped in to mediate, and the man punched him in the face instead. It was a long day.

Since then I’d been a bit more wary of than worried about many of the homeless people I passed on the street, yet I tried to strike a balance between vigilance and mercy. Mercy, as described by Venerable Catherine McAuley, founder of the Sisters of Mercy, is “the principal path pointed out by Jesus Christ to those who are desirous of following Him.” It sounds simple enough. And yet I often feel that this path can be a difficult one to travel, and that keeping pace with Jesus, our guide on this path, is a challenge.

The thing is, it’s easy to imagine yourself doing great works of mercy. It’s easy to have good intentions. What’s difficult is the follow-through, because God didn’t challenge us to commit to the corporal works of mercy for a few days. God challenges us to commit to a lifestyle—and a lifetime—of mercy. And that’s not easy, because maybe in the end, the corporal works of mercy—feeding the hungry, giving drink to the thirsty, sheltering the homeless and others—aren’t things that can be completed the way one can finish playing a board game or painting a picture. Each act is not an isolated incident, but a part of a process, akin to sweeping the floor. You have to do it regularly or things begin to get messy. They must become habits without becoming mindless. Ultimately, the works of mercy point us toward ways in which we can build God’s reign on earth.

And yet action must be rooted in relationship. In one of the most powerful passages in Dorothy Day’s autobiography, The Long Loneliness, she speaks of the wonderful evolution of the Catholic Worker movement and writes about how many surprising, God-filled moments came about while “we were just sitting there talking.” She writes of people moving in and out of the house and says, “Somehow the walls expanded.” I can’t help but think that here she writes not only of the willingness of the community to take on and take in guests, but also of the walls of the heart growing in kind. Because that is how our hearts are meant to work: just when you think your heart is full to the point of breaking, it adapts and grows and learns to love more than you ever thought you could.

In an effort to delve more deeply into these works of mercy, I decided to stay as an overnight volunteer at a homeless shelter at a nearby church. I would spend the night in a church basement with more than a dozen men I’d never met, and I had no idea what to expect.

When I arrive, the shelter feels strangely similar, like the kind of place in which I would have attended a Brownie sleepover as a child, but with rough, folded cots instead of thin, Minnie Mouse-themed sleeping bags on the floor. The walls of the shelter are white, and the room is long and sparse. The cots are folded and lined up near the walls; each already has blankets on it. Near each bed are hooks on the walls upon which hang random personal items, presumably owned by the men: a few jackets, a suit coat on one hook; a plastic, gold-colored centurion helmet on another.

When the men arrive, a young man smiles broadly at me and introduces himself as Angelo. He holds out his hand to shake mine. “Don’t worry, they’re clean,” he says. I am not worried about germs, just shocked that he is so young. He couldn’t be older than his early 20s. Next, Greg comes over. He is wearing a blue-grey sweatshirt and has several tattoos. We begin chatting, and the subjects range from our favorite kinds of chicken to the fact that he’s been to Western Massachusetts, where I grew up.

Greg tells me he has been all over New England and the Midwest. His dad was in the Navy. When he finds out I work for a Jesuit magazine, he says he knew a guy who went to a Jesuit high school. As he talks, he spreads peanut butter on a toasted heel of bread and then rolls it up.

“Are the Jesuits like the brothers up by St. Francis? Is there a rivalry, like gangs?” he asks, laughing.

“Like the Sharks and the Jets,” I say. “Lots of finger snapping.”

Johnny, who has been sitting nearby, gets up and walks away and then comes back with a card that reads St. Padre Pío House. He says it’s at 155th Street in the South Bronx. “He was a priest who bled from his hands and feet,” he says with a sweet pride at being able to connect my world to his. “Yeah, that’s the stigmata,” I say. Johnny nods.

A man named Louis asks if I brought earplugs. I tell him no. “I hope you’re a good sleeper,” he replies. One of the men tells me a joke and I laugh in approval. Greg chimes in, “You have to let her think we’re high-quality homeless people,” he says and laughs, as well. And in that moment I realized that, deep in conversation, I’d forgotten about that label for a while. I hadn’t tried to categorize the men as crazy or Christ-like. I’d just let them be. And I’d allowed myself to be present.

The lights go out at 10:30 p.m., and I have a difficult time falling asleep. Around 11 p.m., a cellphone rings. The snoring is at all volume levels and intervals, so at times it sounds almost like one continuous rumble. I understand now why Louis asked me about the earplugs. A man starts coughing with gusto. Someone brushes off his sheets. And yet somehow, after talking with many of the men that evening, all the noise doesn’t really bother me. I’m grateful that they’ve welcomed me. Throughout the evening, that small space seemed to expand, as the men made sandwiches or watched movies or just sat there talking. I feel surprisingly at home.

Kerry Weber is managing editor at America. This essay is adapted from her forthcoming book Mercy in the City: How to Feed the Hungry, Give Drink to the Thirsty, Visit the Imprisoned, and Keep Your Day Job (Loyola Press, February 2014).

@Kerry_Weberweber@americamagazine.org
Show Comments (
1
)
Comments are automatically closed two weeks after an article's initial publication. See our comments policy for more.
Sara Damewood
7 years 11 months ago
Yes, isn't it true that once you get to know people you feel "surprisingly at home" with them? Great article. Thanks!