Lost in the Bronx 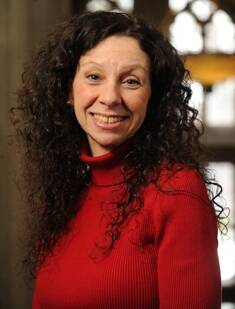 The light flicks on to a familiar scene, the cold, indifferent space of an industrial kitchen—outsized stainless steel sinks, tall pots stacked on tall shelves, long-handled ladles hung above the cast-iron stove.

The lone soul in the room is a woman. (We don’t yet know she’s a nun.) She stands before the microwave oven, praying. She dutifully lists the world’s suffering children, the sick, the poor—but her heart’s not in it. After a few futile attempts to name others she should pray for, she gives up. Mercifully, the timer on the microwave goes off, and she is relieved from her fruitless vigil.

So begins the poignant story of “Grand Concourse,” a play written by Heidi Schreck and brilliantly performed at Playwrights Horizon, a small gem of a theater tucked away on busy 42nd Street in Manhattan. For 100 minutes, Schreck and her small cast of gifted actors perform theatrical magic—the willing suspension of disbelief falls over the audience like a spell, and we are transported from glitzy Manhattan to the nitty gritty of a Bronx soup kitchen. Here, near the epicenter of the lights and sights of Times Square, we witness two women grapple with their inner poverty, their brokenness and the darkness they discover within themselves.

Schreck’s play is as brave as her nun, Shelley, who lives a virtuous life performing the corporal works of mercy even as she is losing her faith. She goes through the motions of caring for the poor—an endless round of chopping vegetables, sliding them into plastic tubs, dumping them into big pots on the stove, a ritual she performs repeatedly in the play—but, as with her ineffectual prayer, she does this by rote rather than with love. Shelley is tired, midway through her journey of life, and sure of herself as she seems, she has lost her way.

Shelley’s spiritual torpor is relieved by the arrival of Emma, a young volunteer who comes to the soup kitchen in search of work. “I thought I might do some good,” she replies when asked why she has come. “For whom?” Shelley asks, skeptically. “For them,” Emma answers, the people she would serve, and then, more honestly, “For me.” Though Shelley may not realize it, in her uncertainty, in the commingling of altruism with selfishness, Emma is a version of herself. She, too, is lost, and Shelley takes her on in attempt to help her find her way.

But Emma is not what she seems. Just as she gains Shelley’s trust and affection—neither of which the latter easily grants—Emma’s dark side manifests itself in ugly and destructive ways. Shelley forgives Emma’s first offense against her friend and mentor—her claim that she has cancer turns out to be an outrageous lie—but Emma’s offenses mount, culminating in an action that leads to the suffering and death of the one creature in the world Shelley loves. Devastated by her loss, as well as by this betrayal, she finds Emma’s sin unpardonable. Confounded by the darkness of the deed and tired of the obligation to forgive every violation by virtue of her vows, Shelley makes a choice that is as dramatic as it is inevitable. She decides to leave her order.

Ironically, it is not until this final scene of the play that she appears in her habit. This tired woman, who has struggled mightily with her vocation, seems newly sanctified by her clothing. She has never seemed so deliberate, so committed and so free. In her final speech to Emma, who has returned in search of forgiveness, Shelley does not grant it—not because she can’t forgive, but because she chooses not to. No longer bound to a code of conduct that prohibited such choosing, Shelley exercises her God-given free will. Her decision might seem troubling, but the aura that emanates from her bespeaks a new-found peace.

Surely this is a paradox and a conundrum, but the play refuses to simplify the cause or the cure for spiritual desolation. “Grand Concourse” tells an archetypal story: into Shelley’s carefully-ordered operation walks chaos, into her hermetically sealed world of habitual virtue walks sin, into her spiritual stasis and sense of mistaken vocation walks grace—all in the unlikely form of a wayward girl who wins her heart and then breaks it.

The light flicks on to a familiar scene, the cold, indifferent space of an industrial kitchen. A former nun stands in her habit before the microwave. No words come from her mouth. Her face, her smile, her whole body is a prayer.