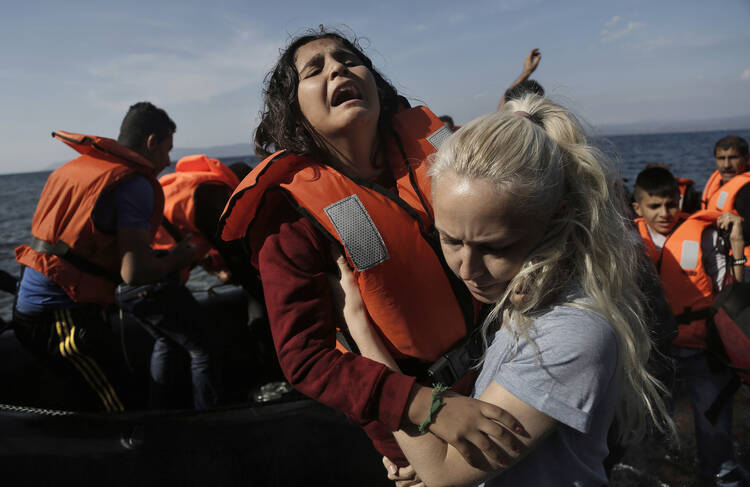 That was a typical sign more than a century ago in cities along the Eastern Seaboard when job openings were announced in store windows.

Of course, it wasn't the Irish alone who bore the stigma of anti-immigrant sentiment in the United States. Name the ethnic group, and suspicions, fears and slanders have been posed against them when Americans who were more settled in this country thought these immigrant groups posed a threat to the American way of life—or, more likely, the status quo that benefited the earlier arrivals.

Germans, Italians, Poles, Catholics, Jews—who, it should be noted, have been shunned by numerous nations over the course of centuries—and Mexicans, now lambasted as "illegal." Name the group, and they have likely been the subject of hatred, fear and harassment at some point in the development of the nation.

So it seems that Muslims in general, and Syrians in particular, are in pretty good company.

Like all the groups before them, they are the victims of nativism, which is a shorthand term for preserving the status of an established population over any claims on such status made by an immigrant group. Nativism is a misnomer when applied to the United States, as the most established population in the country—Native Americans—were themselves subject to centuries of land grabs and slaughter; "the only good Indian is a dead Indian," went one popular phrase of the time.

"Anti-immigration" is the more current term to describe the politics of keeping others out of the country so those already in the country can enjoy the benefits of residency. It has long been held by immigration opponents that immigrant labor depresses wages for everyone else. The kicker is that very few Americans would work the kind of jobs immigrants perform for the wages they're paid—assuming they're paid even that little.

Nativism in the United States existed even before the country took shape. Long before "E Pluribus Unum" ("out of many, one") became the national motto that still graces the nation's coins, groups fleeing religious persecution in England and elsewhere in Europe settled in the colonies, but frequently kept to themselves in their newly settled lands: Pilgrims in Massachusetts, Quakers in Pennsylvania, Catholics in Maryland (named for Mary, the mother of God), Anglicans in Virginia (named for Queen Elizabeth I, the "virgin queen"). Benjamin Franklin, long lauded as one of the architects of American democracy, criticized the German presence in Pennsylvania.

"The great irony, of course, is that our country was founded by people fleeing persecution and intolerance and hostility," said John Carr, director of the Initiative on Catholic Social Thought & Public Life at Georgetown University. "There's a terrible human temptation that when we go through that, we become the people we were trying to escape."

The Alien and Sedition Acts, passed in 1798, became the first federal moves to limit immigration. Three of the laws were revoked after Thomas Jefferson became president in 1801, but one of the laws was invoked to warehouse Japanese, German and Italian "aliens," or noncitizens, during World War II. More than 100,000 Japanese-Americans also were caught up in the war hysteria, and sent to camps along with their alien counterparts.

In the antebellum era, anti-Irish Catholic bigotry appeared in fits and starts, including the occasional burning of a convent or church—not unlike today's arson of mosques. The movement came to a boil with the creation of the anti-immigrant American Party, active in the late 1840s and 1850s. Dubbed the Know-Nothings, party members in 1854 destroyed a stone donated by Pope Pius IX for the Washington Monument. That act stopped work on the obelisk for 25 years, as it caused donations to dry up and Congress to halt support for the project. While they never won a principal national office, the Know-Nothings briefly bested the Whigs as the main opposition to the Democratic Party until it was supplanted in the late 1850s by Republican Party.

The Chinese Exclusion Act, which was meant to last only 10 years when it became law in 1882, was renewed in 1892, made permanent in 1902, survived Supreme Court challenges to its interpretation, and never went away until 1943, after China had become a U.S. ally in World War II.

Mexican and Latin American immigration has been a neuralgic topic since the 1980s, when civil wars and authoritarian governments in El Salvador, Nicaragua, Guatemala and Honduras, coupled with lack of economic opportunity in the region, drove millions into the United States. Despite a slowdown—some now believe there is a net reduction in recent months of immigrants as they head back to their home countries—there are still an estimated 12 million Latin American immigrants without documents living in the United States.

"One of the best ways to defend American values it to practice them," Carr said, including respect for religious liberty. "Our values are not tested in the easy times, but in the hard times."

Judy Coode of Pax Christi International had been at Pax Christi's international headquarters in Brussels, Belgium, as police essentially shut down the city on occasion while conducting raids for suspected terrorists and their helpers connected to the Nov. 13 attacks in Paris. It was "intense," said Coode, whose 20 years working for the Maryknoll Office for Global Concerns prior to Pax Christi saw her frequently visit Latin America and the Middle East.

Yet, as much of an imposition Belgians felt by having their lives disrupted, Coode told Catholic News Service, "it's nothing compared to living in a country where this kind of thing is a daily occurrence." It is those kinds of events that make people consider leaving their homeland for a safer, less violent place, even if it means never seeing their country again.

Missing from this conversation are African-Americans.

While they were immigrants, the ancestors of today's American blacks did not come of their own volition, noted the Rev. Cheryl J. Sanders, a professor of Christian ethics at Howard University Divinity School and senior pastor of the Third Street Church of God, both in Washington.

"We weren't chosen for our looks or our education or our skills" by an immigration officer, Rev. Sanders said. And, while greater equality has come to African-Americans over the course of her life, there is still a long way to go, she added.

"When we folded everybody into the melting pot, they didn't put us in there," Rev. Sanders said, adding that one cannot talk about "a melting pot of whiteness ... without dealing with the ugly reality of that."

Mark Pattison - Catholic News Service
Show Comments (
1
)
Comments are automatically closed two weeks after an article's initial publication. See our comments policy for more.
Callie Corvin
7 years ago
As immigration is increasing day by day, there must be proper provisions and laws for people who migrate into a new country. There must be proper respect, equal wages like in France, the wages are pre-defined in agreement with respect to category of work. Have a look at their laws at http://www.convention-collective-metallurgie.fr