“Amoris Laetitia” embodies the pope’s vision of a listening church. 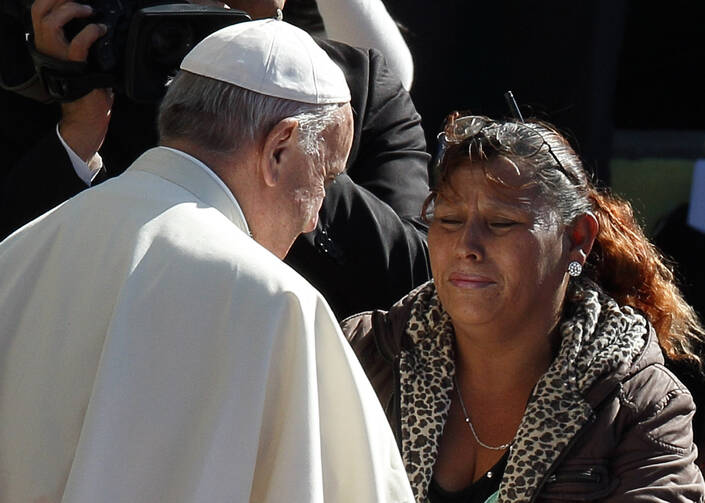 Last October, Pope Francis reminded the members of the Synod on the Family that the church is called to be “a listening church…in which everyone has something to learn.” In both content and style, “Amoris Laetitia” embodies this vision of a dialogical church. The text itself is the result of a historic process of listening. Departing from previous customs, Francis facilitated what he describes as the “Synod process,” a two-year long effort that involved two assemblies of bishops and several efforts to solicit the input of lay people. This, he writes, “proved both impressive and illuminating” and enabled him “to appreciate more fully the problems faced by families throughout the world” (No. 4).

The pope’s inductive approach is visible in the many sources that he draws upon. Like “Laudato Si’,” “Amoris Laetitia” departs from traditional papal teaching, which generally only referenced the Bible, magisterial documents and the teachings of saints. In dialogue with these doctrinal sources, Francis develops a pastoral theology of family life that explicitly draws from some surprising sources.

In addition to the scriptural sources embedded throughout the text, Francis brings in dozens of additional sources in the 391 footnotes to the text. Unsurprisingly, 132 of the references are to the final texts (“Relatio Synodi”) that were drafted by the 2014 and 2015 Synods of Bishops. Throughout the text, Francis references his own writing over 80 times, including nearly 50 references to his catechesis sessions. References to these and other pastoral addresses allow “Amoris Laetitia” to offer a more personal tone, particularly in Chapters 4 and 5, which he hopes will be more useful to families (see No. 7).

For example, in No. 104, he quotes a catechesis from last May to advise families “never to let the day end without making peace in the family…. Just a little caress, no words are necessary. But do not let the day end without making peace in your family.” Or later in No. 133, he draws from his address to a group of families to emphasize the importance of “Three words: ‘Please’, ‘Thank you’, ‘Sorry.’ Three essential words!” At times, Chapters 4 and 5 almost read like an excellent wedding homily.

In terms of previous popes, the teachings of St. John Paul II, and in particular “Familiaris Consortio” (1981), are referenced the most with over 50 citations in the text. This does not include the 14 references to the Catechism of the Catholic Church. This strong dialogue with John Paul II’s work is noteworthy as some commentators in the coming days will point to some of the developments or tensions between “Amoris Laetitia” and “Familiaris Consortio.”

“Amoris Laetitia” reflects the pope’s Jesuit spirituality in its call for a more listening and discerning church on the question of family. While he only references the Spiritual Exercises of St. Ignatius of Loyola three times, Ignatian spirituality is deeply present as he proposes a pastoral response. Chapter 8, for example, invites the church to adopt a “process of accompaniment and discernment,” which would include assisting families in “an examination of conscience” (No. 300).

Francis also includes dozens of references to documents produced by Vatican offices, Thomas Aquinas and St. Augustine. For me, however, the most surprising references in this text are those to non-Catholic sources. In No. 129 he references a scene from the “film Babette’s Feast, when the generous cook receives a grateful hug” as an example of the need to cultivate and share love. In No. 149, Francis references the “teachings of some Eastern masters who urge us to expand our consciousness.” Several times, he draws from the work of poets and writers from the last century, including Jorge Luis Borges, Octavio Paz, Antonin-Gilbert Sertillanges, O.P., Gabriel Marcel and Mario Benedetti.

But it is perhaps his inclusion of two Protestant figures that will surprise and inspire many. In his reflection on the meaning of love, Francis offers an extensive and powerful quote in No. 188 from Martin Luther King Jr., who the pope describes as meeting “every kind of trial and tribulation with fraternal love.” Later, in Chapter 9, Francis quotes Dietrich Bonhoeffer in laying out a deeper spirituality of “exclusive and free love.”

By engaging the experiences and wisdom of sources beyond the traditional reference points of Scripture, popes and saints, Francis models in “Amoris Laetitia” the type of listening and discerning church that he believes can address many of the problems facing the family today.

Kevin Ahern is an assistant professor at Manhattan College and author of Structures of Grace: Catholic Organizations Serving the Global Common Good (Orbis, 2015).

Show Comments (
1
)
Comments are automatically closed two weeks after an article's initial publication. See our comments policy for more.
Richard Murray
6 years 4 months ago
Dear Friends, After having been silent on religion for some months, Ross Douthat at the zionist New York Times has said more subterfuge and nonsense about Pope Francis’ “Amoris Laetitia.” Here’s a critique of Douthat’s article: https://scripturefinds.wordpress.com/2016/04/10/part-ii-ross-douthat-is-a-literary-fukushima/ And here is a downloadable version: https://www.academia.edu/24247902/Ross_Douthat_Is_a_Literary_Fukushima_Part_II