Listening in Ferguson: It’s not all black and white 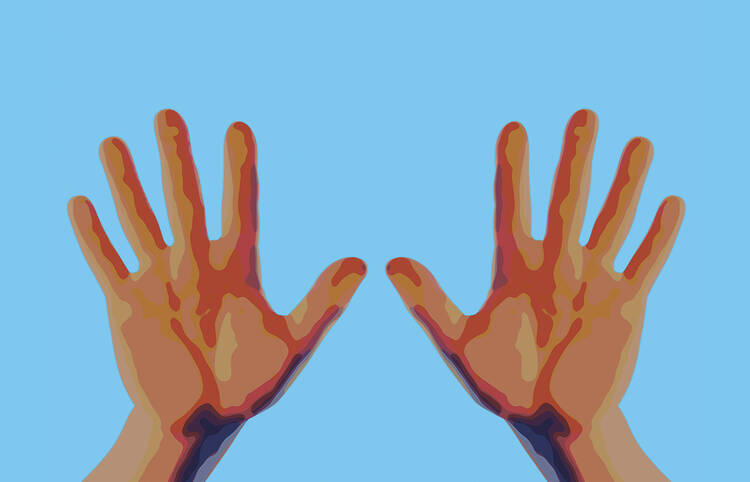 No monk should ever defend another in the monastery. Nor should he take sides in an argument…. We decree that no one should be permitted to ostracize or to strike any one of his brothers; and if any monk should break this rule, let him be publicly reprimanded, that the others may learn from his mistake.

In two consecutive passages, St. Benedict outlines how a monk should respond when he encounters discord in his community. He should not lash out, even if he feels justified. And he should not choose a side, even though he may think he knows all the facts. Instead, he should listen—as he is compelled to do by the opening words of the Rule itself: he “inclines the ear of his heart” (Prologue, 1.1).

Like most people in North America right now, I have been thinking about Ferguson. Or rather, I have been wondering what I should do about the conflict that has come from it. But I live in a monastery in a suburb of Saint Louis that was recently ranked 12th among the 25 most affluent neighborhoods in North America. What do I know about urban poverty or racism?

So recently I asked permission to drive out to a prayer service in Ferguson, and I caught a ride with my friend Dennis, who works here at the abbey. Dennis is African-American and lives in Ferguson. I asked him, as we were driving out to the service, what he thought of the protests. He smiled and avoided the question. “I don’t want any part of that. I’m just trying to get on with my life. Those people are making trouble. They aren’t even from the neighborhood.”

“But they aren’t the only ones making a scene,” I said. I wanted to press him for a deeper answer because how else is a white guy like me from West County going to understand this situation if I’m not willing to ask some awkward questions? “Are the cops racist?” I asked. “How come black people keep getting shot? And why is everyone so angry?”

“The police have always been like that,” he said. “It isn’t going to change.”

Of course I noticed that this second answer was a bit different from the first. And I figured if I asked a third time, maybe I’d get an even deeper explanation. I said maybe things should change. I said clearly something must be wrong or this many people wouldn’t be this angry. I asked him why so many people think the police are racist.

“There are good police and bad police,” he said. “But I’ll tell you this much: I’ve been pulled over three times in your neighborhood. I don’t know why they’ve got to be pulling me over that many times except that they see a black man on this side of town and assume he must be up to something.”

Dennis continued: “A few weeks back, my car broke down, and I had to walk the rest of the way to work,” he said. “A guy sitting on his front porch called the police on me. Just for walking down his street at eight in the morning. I know he did because I watched him do it as I walked by. Sure enough, two patrol cars showed up. Look here, I’m just trying to make money, you know? Trying to get by; I don’t need that [stuff].”

There was some anger. It took some time for me to pry it out of him, but sure enough, it was there. And here’s the thing: my friend Dennis is a family man—a married man with three children and two jobs, who pays his taxes and pays his rent on time and goes to church on Sunday and educates his kids just like anyone else.

While I was thinking about this, Dennis started to back off a little. Maybe he felt self-conscious. Maybe he felt this kind of talk wasn’t something I needed to hear, or maybe he was afraid I’d judge him for it. “But you know, that’s just how things are,” he said, “I don’t have time to be angry about it.”

Dennis doesn’t have time for the anger. He does not want the anger. He would rather live his life without the anger. And that was pretty much all I was going to get out of him. He didn’t want to talk about it any more. I don’t blame him. He doesn’t want to be lumped in with the looters, bottle-throwers and arsonists. He has other fish to fry—like making a living. Like taking care of his kids. Like getting to work on time (provided he doesn’t get pulled over on his way here).

Caught in the Middle

I have this other friend named Charles Lutz. He is a policeman from around here, and he helps with security on campus at our school when he is off duty. So I told him about Dennis and how he’d been pulled over three times, and how when his car broke down, someone called the cops on him.

“I hate that some old racist with nothing better to do has to call the cops just because he sees a black man walking down his street. It embarrasses me. It’s a waste of my time. Plus, I’m the one who ends up looking like a jerk. And the worst part of it is, a peaceful citizen gets harassed by the police.”

“Look here,” he said. “Yesterday, we get a call from a jewelry store owner here in town because there are two black men in his store ‘acting suspicious.’ Is it a crime to be black in a jewelry store now? Of course not. Do I want to drive over there and get in the middle of that? Of course not. And how do I even walk into the store without making those guys feel like dirt? But what happens if I ignore the call? What happens if I decide not to drop by and, God forbid, those two guys do end up robbing the place? Then who gets blamed for that? I’m caught in the middle. And I hate it.”

These forces, however, are not, I believe, beyond our control. I believe we can disarm this trap (or defuse it or unwind it) if we stop focusing on the riots and the protests and even the shootings themselves. I think we can begin to restore peace to our city if, instead of lashing out or taking sides, we simply stop to listen. And maybe if we listen patiently to this anger—if we ask the awkward questions and really listen to the answers—practical solutions will emerge.

There is an eighth grader here at our school named Max. A couple of months ago, he and his older brother asked their mom if they could drive down to Ferguson to help with the cleanup. She understandably declined to send them into an active riot zone.

Still, Max and his brother felt they needed to do something, so they went online and looked up a list of the businesses that had been damaged. They found the name of one of the owners and called her on the telephone. She hung up on them. So they drove out to her house. For three and half hours, they sat in her living room and listened to her anger. And it turned out that unless they had $20,000, there was not much they could do. Well, that was the answer, wasn’t it? They went home, started an online petition, and eight days later, they had raised $20,608. And Maria Flores rebuilt her business.

When Max and his brother saw injustice, they didn’t lash out in anger. They didn’t choose a side. They listened carefully. They reached out with their hearts, they created partnerships, and the answer spoke itself. Now if Max can help change Ferguson, so can we. Let’s start really listening. And if one of you hears an answer, let the rest of us know.

J. Augustine Wetta, O.S.B., is a monk of Saint Louis Abbey and a teacher at the Saint Louis Priory School, where he also coaches rugby and serves as chaplain.