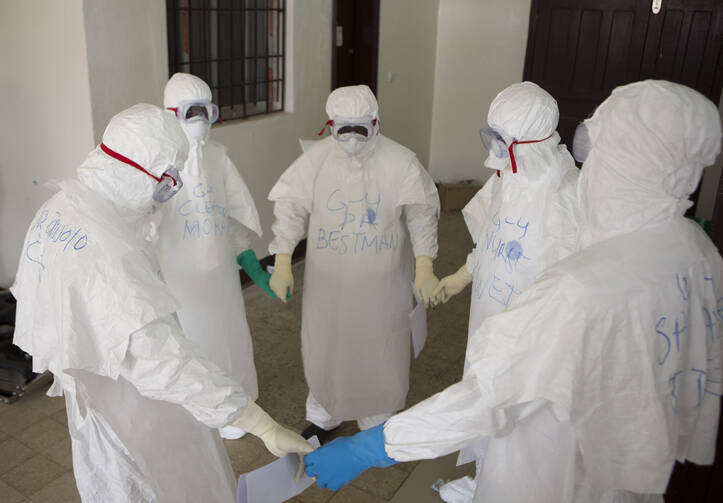 First, some perspective is in order. Though this latest outbreak of the Ebola virus has, tragically, claimed the lives of more than 3,800 people, including one victim in the United States, the disease remains terrifying more within the media-stoked American imagination than as a practical threat in most parts of the world. Only one person has become infected outside the West African viral zone, though more desperate people like Thomas Eric Duncan, a Liberian who died in Dallas on Oct. 8, will surely try to escape outposts of poverty in Africa for treatment in more affluent quarters of the world.

Ebola is a frightening disease and its mortality rate is formidable; but in the months while it has been ravaging West Africa, just as many people, if not more, have fallen victim to malaria alone. In fact, easily preventable illnesses like malaria, measles and diarrhea claim about half a million children under 5 each year in Africa, and thousands perish from complications arising from another notorious scourge—plain old, small-type hunger.

The World Health Organization is enduring a good share of criticism for a sluggish response to Ebola, but blame for this unprecedented crisis can be widely distributed. The sluggishness did not begin last spring at W.H.O. headquarters in Geneva; it began decades ago in capitals across the West. The potential for a global outbreak of a dangerous virus like Ebola has been long predicted and various remedies prescribed. The most obvious countermeasures to the threat have been well known, if ultimately ignored—developing low-tech capacity in the impoverished nations of the world to respond adroitly to outbreaks, drilling wells to provide potable water, building up minimum sanitation capacity to prevent the spread of disease and better distributing the world’s wealth in foodstuffs. That last measure would not only fortify bodies against illness but relieve the necessity for hungry people to seek out bush meat, whose consumption is the frequent starting point of viral outbreaks. It is suspected that Ebola was transmitted to human hosts through exposure to or consumption of fruit bats.

While Western leaders congratulate themselves on meeting Millennium Development Goals on poverty, an achievement that increasingly appears statistically dubious, payment on third world debt continues to consume resources that should have been committed to mitigating the vulnerability of people in places such as Sierra Leone and Liberia, where Ebola has hit hardest. Now U.N. officials say they need $1 billion to address this latest health crisis, and global leaders are descending on the hot zone with resources and matériel to stave off an epidemic that threatens to escape the continent. But how seriously should such efforts be judged? For far too long, profit has overshadowed need; the West prefers market forces to dictate health care and research priorities. And each year spending on making war dwarfs investments in economic development, a warped prioritizing that Pope Francis has deemed a global scandal.

In “The Joy of the Gospel,” Pope Francis decries a “globalization of indifference” and “an economy of exclusion and inequality.” He writes: “The majority of our contemporaries are barely living from day to day, with dire consequences. A number of diseases are spreading. The hearts of many people are gripped by fear and desperation, even in the so-called rich countries. The joy of living frequently fades, lack of respect for others and violence are on the rise, and inequality is increasingly evident.”

Humanity, he argues, is near a historic pivot. How shall it turn? To a “generous solidarity” or to an anxious, obstinate withdrawal?

The hungry and the jobless cross borders when they have to, regardless of the law. Now the sick are sure to join them. Globalization means there is no such thing as the third world or the first world; there is only our world. If it is true, as some suspect, that Thomas Duncan fled West Africa’s quarantine to seek treatment in Dallas, he might have miscalculated. Poverty, poor social prioritizing and diminished health care capacity are not problems in West Africa alone. All the high-tech health care in the world is little use to a person given marginal treatment at an emergency room because he does not have health insurance.

If we cannot be persuaded to solidarity by its moral appeal and the spiritual justness of it, we will be strong-armed into a broken and perilous version of solidarity by the reality of air travel and leaky national borders. If the great gifts of the world and human creativity are not mercifully shared, human ingenuity and desperation will converge to press some other compensatory encounter. It would be better if mercy, compassion and relationships were the driving forces of solidarity, as the church has long taught. But until then, Ebola will do the job for us.

The Editors
Show Comments (
5
)
Comments are automatically closed two weeks after an article's initial publication. See our comments policy for more.
Bill Mazzella
7 years 8 months ago
Bravo! Editors of America. If people want to know what this magazine is all about, here it is. Sadly greed still triumphs. And for too many anti-abortion precedes care for the millions of children who die every year for lack of basic necessities. That reality has been in the background. The Ebola outbreak will have a positive outcome. We are our neighbor's keeper. And they are also in Africa. Meanwhile no one is showing us better who our neighbor is more than doctor steven Hatch and the nurse who are treating Ebola patients in Africa at risk to their own health. Likewise the pastor who died next to Dr. Hatch, who prayed for the doctor as he lay dying. So also the doctors who lost their lives there. The greed of the world is softened by such shining, inspiring examples. http://www.nytimes.com/2014/10/17/world/africa/ebola-liberia-west-africa-epidemic.html?hp&action=click&pgtype=Homepage&version=LargeMediaHeadlineSumCentered&module=b-lede-package-region&region=top-news&WT.nav=top-news&_r=0
Ronald Pelley
7 years 8 months ago
Very good article for an amateur. But the author reveals the amateur status by failing to mention two crucial insights. (I) the role that the various West African civil wars over the last three decades have played in destroying the attempts to develop health care infrastructure. (II) the role of the political response to HIV in the US has played in the destruction of the American Tropical Medicine basic science program. Since 1985 we have taken apart one of the world's finest programs for research in exotic diseases. At present, in my institution, medical students get less than one hour on Tropical and Extraordinary Disease during their four years. For those of you who are so confident about our ability to contain Ebola here in the US, count how many people you can see in the grocery wearing scrubs. Almost 150 years ago Ignatz Semelwiez taught about how to contain nosocomial infections by proper handwashing and changing clothes between the street and the clinic. If the administrators that currently run our health care institutions cannot manage their ancillary health care personal to contain MRSA what chance have we to contain Ebola. A 67yo MD with a PhD in Microbiology who still teaches Infectious Disease to 2nd Year Medical Students.
Roberta Lavin
7 years 8 months ago
Thank you for a thoughtful article that supports solidarity rather than fear. I must admit, as a former public health emergency preparedness professional and current professor, I have been disturbed by fear mongering and the lack of compassion expressed by many people of faith. I expect the Congress to pump the people up and ignore the good of the Nation as it has become the norm, but I didn't expect it from Priest and other people in the Church. Ebola victims are the modern day lepers. It would appear the gospels instructions on caring for the sick and the poor only apply if the the sick are not contagious and poor are not of color.
william lupinacci
7 years 8 months ago
"more desperate people like Thomas Eric Duncan" ??? I thought Mr. Duncan was asymptomatic when he traveled to the U.S. to visit his children and had no idea that he had Ebola. Fox News constantly paints ugly pictures of "desperate" disease-ridden Africans invading our shores. But, this is Fox News fear mongering. Why has America bought into this notion? Far less than 1% of West African have U.S. Visa's and if one on them tried to get a U.S. Visa to try to travel to the U.S. after they get Ebola, the odds of them succeeding in getting here are just about 0%.
Kevin Clarke
7 years 8 months ago

At the time the editorial was written, most media accounts of Mr. Duncan's trip to Dallas suggested he knew of his exposure to Ebola. His family and friends have strongly denied that possibility, however, as more recent press accounts indicate.