Did Jesus get ‘hangry’? 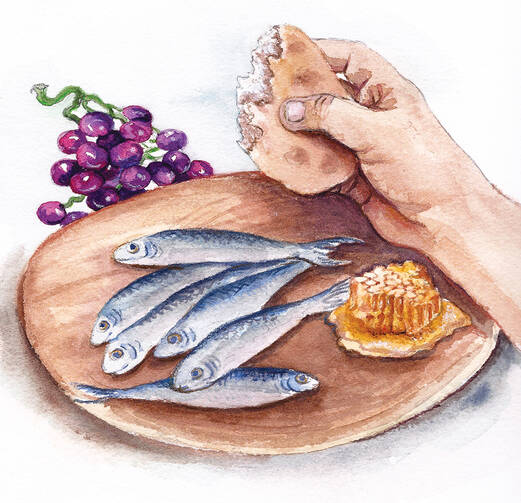 And it came to pass, as he sat at meal with them, he took bread, and blessed it, and broke it, and gave to them. And their eyes were opened, and they knew him. They knew him by the breaking of the bread! And suddenly they recognized his hands, his face, his wry kind hawkish eyes; and they gave him a piece of broiled fish, and of a honeycomb, and he took it, and did eat before them, and almost certainly they ate with him, that very last time, and the bread tasted both sweet and bitter in their mouths, for they must have been stunned, and weary and affrighted, each in his heart knowing he was soon to leave them forever, until they saw him again by the right hand of the Father, in the unimaginable country made of love and joy; and he led them out as far as to Bethany, and he lifted up his hands and blessed them. And it came to pass, while he blessed them, he was parted from them, and carried up into heaven.

But a few hours later, I would guess just after dusk, they sat again at table, those 11 men and surely several women, all of them both joyful and sore of heart, and they broke bread, and remembered him; and so do we all, every morning, noon and night when we do the same, even unto this day; but remember ye the bruised witty dusty peculiar man he was; for it is by the very impossibility of who he was that we may yet be saved, we who are wholly human, but also shot through with the light of the love.

Brian Doyle is the editor of Portland Magazine at the University of Portland and the author, most recently, of So Very Much the Best of Us (ACTA).

Show Comments (
2
)
Comments are automatically closed two weeks after an article's initial publication. See our comments policy for more.
Carolyn Disco
6 years 10 months ago
Thank you, profoundly.
William Rydberg
6 years 10 months ago
Fantastical ! This understanding of Jesus reminds of contemporary North American TV/Movie characters... One wonders why his disciples said nothing to the contrary when he said; "Take my yoke upon you, and learn from me; for I am gentle and humble in heart, and you will find rest for your souls." Matt 11:29. The disciples appear not even to be surprised by the remark... Do remember that Jesus is the True King of Israel. Fully human and fully divine, like us in all ways except for sin. Just my opinion, in The Risen Christ,