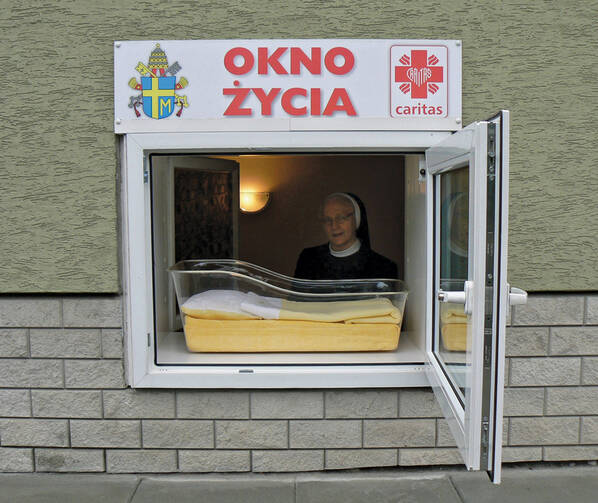 On a damp street in Warsaw, not far from St. Florian’s Cathedral, a tiny mattress lies on display behind a safety-glass window, installed at waist height on a dull gray wall. When the Polish capital’s first “life window” was dedicated in 2006, it was one of dozens newly installed around Europe as a safe place for unwilling mothers to leave their babies. Today controversy is growing, as an influential U.N. committee charges that the windows violate children’s rights.

“We’re not encouraging mothers to get rid of their children,” Agnieszka Homan, spokeswoman for the Polish church’s Caritas charity, said. “These life windows offer a facility where women who don’t want to give birth in [a] hospital can leave them anonymously, without endangering [babies’] lives.”

Historians believe Europe’s first baby hatch, life window or foundling wheel was opened in Rome under Pope Innocent III in 1198. Most hatches were closed in the 19th century, as state social care expanded; but they began to reopen at the end of the 20th century, as more babies were abandoned amid economic hardship and social breakdown.

Most now consist of heated incubators with simple sign-directions, which trigger a bell or buzzer when a baby is deposited inside. In Krakow, Poland, the Sisters of the Holy Family of Nazareth opened a life window in 2006. When a baby was left there last fall, a card was found: “Casper, I’m sorry. I love you very much—Mum.”

“We were woken by the alarm at night and ran down, and we saw a beautiful boy lying in the window,” Sister Jozefina told the Catholic weekly Gość Niedzielny.

“The card really touched us, since we sensed the mother must have really struggled.... We wonder what made her give up her own child, and we’re supporting such women with our prayers.”

While abandoning children is illegal in Britain and other countries, 11 of the European Union’s 27 member-states now allow hatches. Germany has about 80 baby hatches, and Austria has 15. In Switzerland, 87 percent of citizens said they were “very useful or useful” in a 2011 survey, while more than a quarter thought every hospital should have one.

That helps explain the strong reactions when the U.N.’s Committee on the Rights of the Child, based in Geneva, called in 2012 for the closing of baby hatches in Europe. A Hungarian committee member, Maria Herczog, denounced the “medieval” hatches as a violation of the U.N. Convention on the Rights of the Child, which has been ratified by every major country except the United States. She said the hatches contradicted Articles 7 and 8 of the convention, which enshrine a child’s rights to “to know and be cared for by his or her parents” and “to preserve his or her identity” and encouraged women to abandon their babies after giving birth in “insecure situations.”

“Adopted children will one day want to know about their roots, but this is impossible with the life windows,” Monika Redziak, director of Poland’s Catholic Care and Upbringing Centre, said.

Homan, the Caritas spokeswoman, thinks the objections are all a misunderstanding. She points out the same U.N. convention’s Article 6 enshrines a child’s “inherent right to life,” and this has to take priority. Supporters say the life windows are saving newborns. Polish church representatives say they’re counting on the Vatican, which is represented at the U.N., to resist attempts to close the hatches.