The Life Of Mae: Finding love in an unexpected place 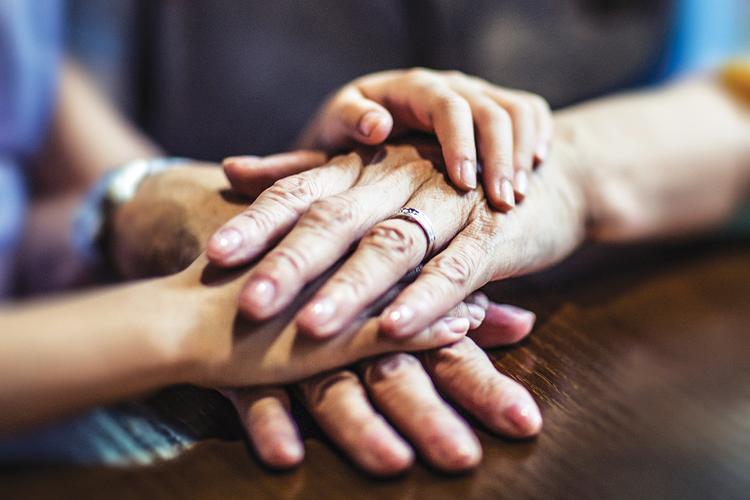 Each time I visit her, my friend Mae says she had another dream about my son. She lives in the nursing home I visit on Sunday afternoons with the community of Sant’Egidio.

“Come and take a walk with me,” Mae says my son tells her in the dream, putting his hand in hers and leading her outside, her bad leg somehow good again. Or he comes to her bedside and rests his head on her chest. “I love you, Mae,” he says in the dream, and then kisses her goodnight.

In her dreams, my son is like an angel. He bids her to walk, when in reality she must use a wheelchair. He gives her unconditional love, when she is cared for by clock-watching workers. They are the same bittersweet dreams I imagine will console me when I am old. My grown son a toothless, sweet-faced boy again, loving only me again. It wrenches my heart to think about it. Time is a relentless taker.

My son Matteo is 8 years old, and we have known Mae for a year. When we arrive at the nursing home, he runs to hug her and she asks him if he has been a good boy in school. He nods shyly and then darts around the social room while Mae and I talk, her robust and stroke-paralyzed frame twisted awkwardly in the wheelchair.

I have always brought my son everywhere, to the nursing home and to other places that are meaningful to me. I remember when he was 18 months old and his father and I took him to Rome. I had to go for work and we made a trip out of it. My husband and I met and lived for a year in the eternal city and I have always loved it: how the sacred and profane meet and mix there, and how the layers of history are visibly caked one on top of the other. It is a city of paradoxes.

Our hotel that time was near the famous Capuchin Crypt, a place I had heard about but had never visited. I put Matteo in the baby carrier on my back and went, undeterred and wanting to take advantage of the opportunity to see one more church before we left. The leaves of the Via Veneto’s sycamore trees shimmered in the October sunshine.

The crypt is an odd attraction, to say the least. A series of small chapels below the Church of Santa Maria della Concezione are decorated from floor to ceiling with thousands of bones belonging to friars who died between the 16th and 19th centuries. Femurs join to make ornate circles on the ceiling. Skulls cover the walls in arched patterns. Entire skeletons stand as sentinels, dressed in monks’ robes. If you Google the place, you’ll see that “macabre” is probably the most frequent adjective used to describe it.

At the entrance, an ominous placard—looking at least a few centuries old—prepares you to absorb the experience. In five different languages, it reads: “What you are now we used to be; what we are now you will be....”

Passing through the rooms of the crypt, I held my son’s small body tight against me. Each bone belonged to a person who had once been as small as him, I thought, feeling slightly nauseated. What a relief it was to return to the street where sullen-faced teenagers smoked on the sidewalk and small Italian cars rushed by.

I think of that experience when I visit the nursing home. I have been going there for 15 years now. The same bone-chilling sign may not hang over the entrance, but its message permeates everything: In our loneliness and pain and dementia, we are what you will be. It is a nearly panic-inducing realization, and one which penetrates viscerally—in the ubiquitous scent of urine, the silent and contorted bedridden bodies and the dementia-fueled outbursts.

But I have also discovered a great treasure there. We were sitting face-to-face in the social room the day Mae shared with me the story of her life. A television set blared in the background.

It came, seemingly, out of the blue. I don’t mean her whole life story, the facts of it, but the one story that had provided fateful contours to her life. We all possess such a story. Like bones in a body, its power operates under the surface, although its outward forms are different for each of us—an event, our childhood, a search, a fork in the road or the totality of these, all hidden from public view. It is, in sum, who we are inside, the journey we are on.

Sharing Mae’s story and her feelings about it would betray a confidence I hold dear. So I cannot write it down. I will say this, though: To pay attention to one person, to harbor and protect her story at the end of her life, is a humbling deed of mercy and a grand responsibility. But to have Mae, to have one friend who trusts you, who dreams your dreams, who loves your loves, is to feel God’s love enter your story, that story.

Often when I think of Mae and of all the elderly friends I have accompanied through the years, I think of a line in Dostoyevsky’s The Brothers Karamazov: “And if two of you are together, then there is a whole world, a world of living love.” This is the treasure I have found, the pearl of great price.

Dani Clark is a writer and editor at an international development organization in Washington, D.C., and a member of the Community of Sant’Egidio.

Show Comments (
1
)
Comments are automatically closed two weeks after an article's initial publication. See our comments policy for more.
Lisa Weber
5 years 2 months ago
A great deal can be learned in caring for the elderly. They have no reason to sell anyone anything and they can be honest about the lessons of a lifetime. We honor their wisdom far too seldom.