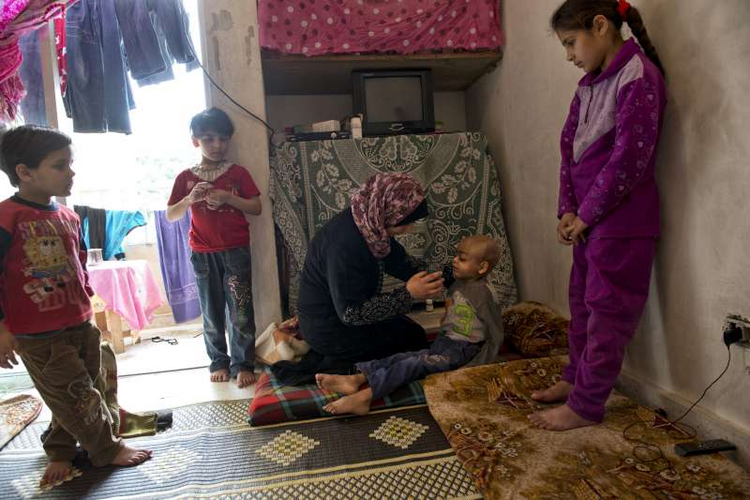 The number of refugees fleeing from Syria into neighboring Lebanon passed the 1 million mark on April 3, according to U.N. officials, a bleak milestone exacerbated by rapidly depleting social resources and a host community stretched to the breaking point. Just over three years after Syria’s conflict began, Lebanon has become the country with the highest per capita concentration of refugees worldwide, struggling to keep pace with a crisis that shows no signs of slowing. Refugees from Syria now equal almost a quarter of the resident population.

“The influx of a million refugees would be massive in any country. For Lebanon, a small nation beset by internal difficulties, the impact is staggering,” said U.N. High Commissioner for Refugees António Guterres. “The Lebanese people have shown striking generosity, but are struggling to cope. Lebanon hosts the highest concentration of refugees in recent history. We cannot let it shoulder this burden alone.”

The impact on Lebanon has been devastating. The country has experienced serious economic shocks, including a decline in trade, tourism and investment and an increase in public expenditures. Public services are struggling to meet increased demand, with health, education, electricity, and water and sanitation particularly taxed.

The World Bank estimates that the Syria crisis cost Lebanon $2.5 billion in lost economic activity last year and threatens to push 170,000 Lebanese into poverty by the end of this year. Wages are plummeting, and families are struggling to make ends meet.

Children make up half the Syrian refugee population in Lebanon. The number of school-aged children is now more than 400,000, eclipsing the number of Lebanese children in public schools. These schools have opened their doors to some 100,000 refugees, yet the ability to accept more is severely limited.

The new President of Caritas Lebanon has launched an appeal to the international community to work harder for the “common good,” seek an end to the conflict in Syria and do more to help refugees who have fled to neighboring countries like Lebanon. Father Paul Karam considers his appointment by the Assembly of the Maronite Patriarch and bishops of Lebanon a vote of confidence in his ability to meet the challenges of his new job and expresses hope that he will be up to the daunting task. “First of all, we are priests; we are the servants of the Gospel and the Word of God, so I don’t have fear,” he said. “I have confidence in God’s will.” Still, he admits the needs surrounding his new job are huge. He notes Lebanon, a small nation of some four million, is struggling to absorb the Syrian refugees who have flooded across the border even as it already hosts 500,000 Palestinian refugees and some 300,000 foreign workers.

The influx of Syrian refugees, he says, has posed existential social, political and humanitarian questions for Lebanon. The number of refugees, he notes, equals almost one-third of Lebanon’s own population. “So how can the infrastructures absorb [them] at the economic level?” he wonders. “ These are very big problems for Lebanon. That’s why it is very urgent now, not tomorrow, and not after tomorrow, to see how we can resolve this problem.”

The Syrian Observatory for Human Rights updated its account of the dead on April 1 as the conflict move deeper into its fourth year. The group now reports at least 150,000 people have been killed in Syria's three-year-old civil war, a third of them civilians, though the true toll could be much higher. The nation’s Christians have become targets of displacement and death threats and the subjects of extortion, kidnapping and at times brutal homicides. Efforts to end the conflict by bringing together representatives of President Bashar al-Assad's government and the opposition have so far failed. The United Nations peace mediator for Syria said in early April that talks were unlikely to resume soon.

A recent report from the United Nations Relief and Works Agency estimates that it will take decades for Syria to recover from the destructive conflict. “Even if the conflict ceased now and GDP grew at an average rate of five per cent each year, it is estimated that it would take the Syrian economy 30 years to return to the economic level of 2010,” says the report, calling the situation an “economic catastrophe.” The survey, conducted by UNRWA’s microfinance department, found that more than two-thirds of UNRWA’s 8,000 microfinance clients had fled their homes by June 2013 and that only 13 percent of their businesses were still functioning.

According to the report, Syria’s economy lost a total of $84.4 billion during the first two years of the war alone and 2.33 million jobs. Half the workforce is unemployed and more than half the population is now living in poverty.

Show Comments (
4
)
Comments are automatically closed two weeks after an article's initial publication. See our comments policy for more.
Christopher Rushlau
6 years 2 months ago
America might pioneer a new area of its magazine ministry by hiring a fact-checker. Or is America's ministry to be along the lines of that peculiar sort of consolation whereby facts don't really matter: faith means facts don't matter?
Mike Evans
6 years 2 months ago
Are we sending any funds and personnel from CRS to help with the Christian refugees? How about the Muslim refugees? It would appear this is a major humanitarian need but we don't hear much about it from either the American church leadership nor from any of our congressional or administration pundits.
allison jackson
5 years 11 months ago
I find this post very interesting. I feel so bad for the people that were greatly affected by the crisis in Syria. When economic crisis arises, there comes foreclosure, bankruptcy, recession, rising unemployment rate and food shortage. The tough economic conditions make it extremely hard for anyone to get a raise and start saving, so having the access to extra money could be a really good thing for many people.
hazel grace grisham
5 years 11 months ago
Any form of terrorism will surely do no good for the people in any community. It will create fear among people, especially to the elderly, children and women. The whole community will be affected because of the destruction of their shelter, there will be food shortage and economic downfall. I do hope that the Syrian government will extend their help and support to their affected citizens.
Advertisement