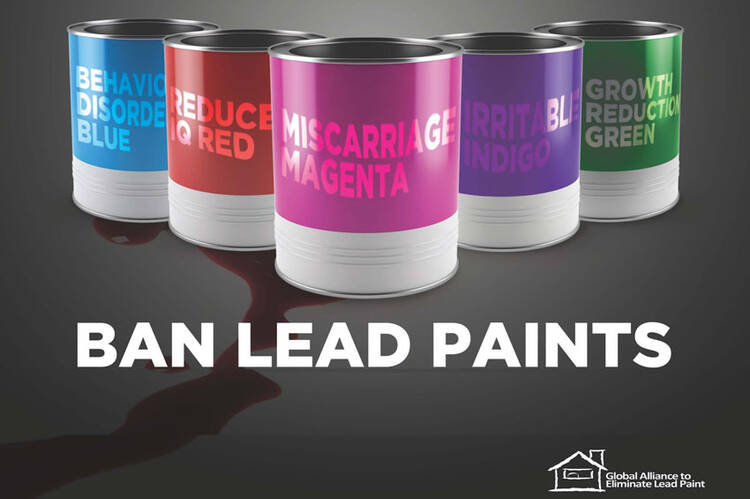 The United Nations Special Rapporteur on toxic waste, Marc Pallemaerts, today in Geneva urged states to increase efforts to eliminate the use of lead especially in paint and toys. Even though lead poisoning is entirely preventable, lead exposure causes 143,000 deaths and 600,000 new cases of children with intellectual disabilities every year, according to the World Health Organization (WHO).

“We simply cannot wait another century to eliminate the use of lead especially in paint and in toys, as there is no known level of lead exposure that is considered safe,” Mr. Pallemaerts said, while joining governments and communities worldwide to mark the International Lead Poisoning Prevention Week of Action, 20-26 October 2013.

The world recognized the impact of lead on human rights as early as 1919, when the International Labor Organization (ILO) recommended the exclusion, with exception, of women and persons below 18 from employment in activities that involved lead in order to protect the function of maternity and the physical development of children.

“Almost a hundred years later, it is unacceptable that lead should continue to be a challenge,” the UN expert said. “A commitment from states to phase out the manufacture and sale of paints containing lead is imperative and should meet little resistance as there are viable alternatives which exist for both manufacturers and consumers.”

Lead is a cumulative toxic substance that affects multiple body systems either through ingestion or inhalation. Young children are particularly vulnerable to the toxic effects of lead because they absorb 4–5 times as much ingested lead as adults from a given source. Moreover, children’s innate curiosity and their age-appropriate hand-to-mouth behaviour result in their mouthing and swallowing lead-containing or lead-coated objects, especially toys coated with the toxic substance. Lead also causes long-term harm in adults, including increased risk of high blood pressure and kidney damage. Exposure of pregnant women to high levels of lead can cause miscarriage, stillbirth, premature birth and low birth weight, as well as deformity of infants. At high levels of exposure, lead damages the brain and central nervous system to cause coma, convulsions and even death. Children who survive such poisoning are often left with intellectual impairment and behavioural disorders. At lower levels of exposure, lead affects brain development in children, resulting in reduced IQ, behavioural changes such as shortening of attention span and increased antisocial behaviour, and reduced educational attainment. These effects are believed to be irreversible.

Even though there is wide recognition of this problem and many countries have taken action, exposure to lead, particularly in childhood, remains of key concern to health care providers and public health officials around the world. Paints containing high levels of lead are still widely available and used in many countries for decorative purposes, although there are good substitutes. In some countries, there is continued use of leaded gasoline and more than three quarters of global lead consumption is for the manufacture of lead-acid batteries for motor vehicles. Lead is also used in many other products, for example pigments, solder, stained glass, crystal vessels, ceramic glazes, jewellery and in some cosmetics and traditional medicines. Drinking water delivered through lead pipes or pipes joined with lead solder may contain lead.

“I wish to remind states of their undertaking in 1919 to use substitutes and introduce strict regulation in industries where such substitutes exist and urge them to enact legislation and implement regulations necessary to protect our children from lead in paint,” the UN Special Rapporteur said, “however with only 63 ratifications by states, the critical mass required for meaningful results will be absent and I call on world leaders to ratify ILO Convention 13.”

During this week, the Global Alliance to Eliminate Lead Paint led by WHO and the United Nations Environment Programme (UNEP) aims to raise awareness about lead poisoning, highlight countries and partners’ efforts to prevent childhood lead poisoning and to urge further action to eliminate lead paint.

Exposure to lead creates health problems for many years into the future. Even in countries that have banned leaded paint decades previously, such paint continues to be a source of exposure until it is finally stripped and replaced. The cost of replacing lead paint means that people living in older, poorly-maintained housing are particularly at risk, and this disproportionately affects economically-deprived communities.

“Paints with extremely high levels of lead are still available in most of the developing countries where paint testing has been conducted as part of the efforts of the Global Alliance to Eliminate Lead Paint,” said David Piper, the Deputy Director of the UN Environment Programme Division of Technology, Industry and Economics (UNEP DTIE) Chemicals Branch. “In most of the countries with lead paint, equivalent paint with no added lead is also available, suggesting that alternatives to lead are readily available to manufacturers.”

Worldwide, 30 countries have already phased out the use of lead paint. The Global Alliance to Eliminate Lead Paint, co-led by WHO and UNEP, has set a target of 70 countries by 2015.