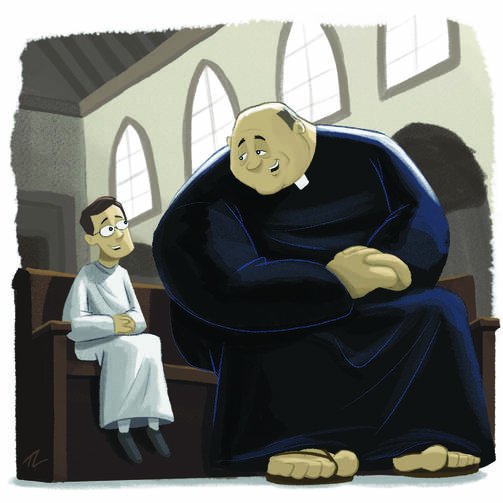 The first Jesuit I ever met was about eight feet tall and weighed 400 pounds, and his robe alone was so vast that probably it could cover a small state like Delaware if necessary, as another one of us altar boys said, awed.

He wore sandals even though it was stone-cold winter when he was visiting our parish to do some sort of secret mysterious spiritual retreat with all the fathers in the Nocturnal Adoration Society. The Nocturnal Adoration Society was a secret group that only fathers in the parish could belong to. To be a member of the society you had to spend one night by yourself adoring the Blessed Sacrament on your knees and smoking cigarettes in the foyer of the church near the photograph of Fulton Sheen——a famous television actor, I think. Also you had to drink so much coffee during the night to stay awake to adore the Blessed Sacrament that when you came home at dawn your hands shook as you read the newspaper to see if the blessed Mets had egregiously punted away yet another eminently winnable tilt, as our dad said. Sometimes instead of tilt he said ostensible contest or competitive misadventure or theatrical pratfall.

He was not much of a smoker, and being in the Nocturnal Adoration Society was harder for him than for some fathers, because they smoked so continuously and he did not, so he had to take over their slots sometimes at night when they had gone 10 or 20 minutes without a cigarette and could no longer adore properly. Our dad said he smoked a cigarette once under great duress while in the war but addiction did not establish a beachhead, as he said, and the savings therefrom may someday pay for an hour of college for one of you children, probably one of the older ones, so far, unless you younger ones make stunning comebacks, like the Mets do once a decade, God help us.

The Jesuit had arrived by train and was picked up by the smallest of the assistant priests, Father Paul, who was the size of a fifth-grader. Father Paul delivered him to the sacristy, as the Jesuit was to celebrate a special early Mass for the fathers in the Nocturnal Adoration Society, and that is how I met him, as I was to be his altar boy. I had just finished cassocking and surplicing when he came into our locker room and sat down companionably. The wooden bench creaked from his weight. We shook hands and went over logistics and then I said shyly that I had never met a Jesuit before, and he said, Well, there are not so many of us in this country, we are rare birds, you might say, aves rares, and then he laughed so hard that the thin steel locker doors rattled.

He continued: We are the secret agents of the orders, you might say. Charged with exploring deeper than what you can see on the surface. Thus our educational urge. But some of us visit parishes, ostensibly to evangelize but in my case to listen. The real life of the church is here in the parish. This is why I wish to meet the fathers. Mothers are the greatest teachers of the Bible but fathers are only half a step behind. If I can convince the fathers that Scripture is not about authority but about humility then perhaps I have done a good thing. Do you have the slightest idea what I am talking about, son?

Any interest in being a Jesuit?

Have you ever visited the local seminary?

But then they fed you, is that right?

And that was the end of your interest in the priesthood?

Ah. Mystery meat and rubber vegetables have done more damage to the church than any number of Communists. If we had better cooks, we could run the world.

I wanted to ask him more about himself, about what it was like to be eight feet tall and weigh more than two dads, and what it was like to wear a dress all the time, and if his feet were freezing, but the church was full of impatient dads shaky from coffee and cigarettes all night, and Monsignor Stephen, the pastor, was suddenly there in the doorway reaching solicitously to shake hands with the Jesuit, so he had to go.

A minute later we were lined up by the altar door, Monsignor first and then the Jesuit and then me, and the Jesuit turned around suddenly and whispered: Listen, probably we will not have a chance to talk again, so thanks for your help, and remember this word: humility. Will you remember that? Yes? You hold onto that word the rest of your life for me, okay? It’s the great secret to everything. It’s the key that unlocks all problems and puzzles. Ask your dad about it. He’ll know what I mean.

Yes, Father, I whispered, and Monsignor turned and gave the signal to process and we processed and that was that; after Mass the Jesuit was hustled away for discussions and disquisitions and dinners and I never saw him again. I never did catch his name either, and even my brothers who remember everything cannot remember his name, although most of my brothers also remember that he was bigger than any professional wrestler or football player we ever saw and it probably took 10 men 10 months to sew that man’s robe, as my youngest brother said.

I told my dad this story a while ago, when we were reminiscing about the Nocturnal Adoration Society and the Ladies’ Altar Sodality and the Third Order of St. Francis and other agencies of our life in our parish long ago, and he said he vividly remembered that spiritual retreat with the Jesuit, and remembered some of the other fathers saying it was a disappointment because all the Jesuit talked about was what we could surrender of our illusory authority and wisdom, said my dad. But for the rest of us he said something piercing that we never forgot. People assume they know what the Jesuits are like but I suspect there is a great deal more to the Jesuits than we see. If that man is any example of how they think and conduct their vowed lives, then I conclude they are wise because they know they are not. And you have to give that man credit as a retreat leader—here it is all these years later and both you and I remember what it was he asked us to remember, about humility. Now that is an effective retreat master, to have something said 40 years ago still be shining in the front of your mind, isn’t that so?

Brian Doyle is the editor of Portland Magazine at the University of Portland. He is the author, most recently, of the essay collection The Thorny Grace of It (Loyola Press).