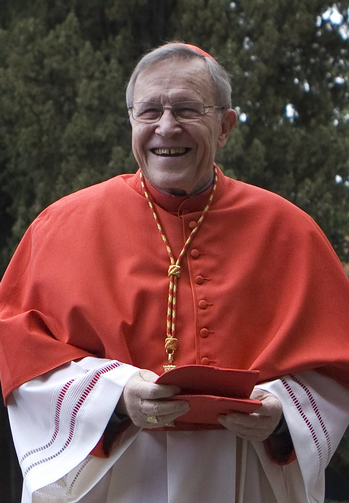 In its approach to divorced and civilly remarried Catholics, the Catholic Church needs to find a middle ground that does not destroy or abandon doctrine, but offers a "renewed" interpretation of church teaching in order to help those whose marriages have failed, Cardinal Walter Kasper said.

"I propose a path that goes beyond strictness and leniency," the German cardinal and theologian told Vatican Radio March 10.

An approach that avoids the two extremes "isn't against morality, it isn't against doctrine, but rather, (is meant) to support a realistic application of doctrine to the current situation of the great majority of people and to contribute to people's happiness," he said, speaking in Italian.

The cardinal was referring to a lengthy talk he had given to introduce a Feb. 20-21 discussion by the College of Cardinals on family life. The talk, titled "Gospel of the Family," was to be published in March in German and Italian by private publishing houses.

Cardinal Kasper told Vatican Radio that the responses to a widely distributed Vatican questionnaire about Catholics' family life -- drawn up in preparation for October's Synod of Bishops on the family -- showed "there is a difficulty, an abyss" between church teaching and the actual situation of many people.

"The church has to bridge this abyss," he said, speaking in English; but that "does not mean pure appeasement policies, but the church must explain in a new way what family and matrimony are in order to help people and at the same time remain faithful to the Gospel."

The cardinal said a similar process might be seen in how the church developed its current approach to ecumenism.

"There were doctrines of the Holy Office (Congregation for the Doctrine of the Faith) before the (Second Vatican) Council against ecumenism, yet the council found a way not to destroy or negate the doctrine but found ways to interpret it in an adequate way," he said.

"I ask myself why it could not be possible also with other doctrines," he said.

He said he wouldn't call such changes "a revolution, as much as a deepening and a development because the doctrine of the church is a river that develops and also the doctrine of matrimony has developed like this."

"It's not about something new as much as a renewal of church practice, which is always necessary and possible," he said.

The primary purpose of his speech to the cardinals, he said, "was not to speak about divorced and remarried people, but to speak about the Gospel of the family" and to foster "a new, better, more deep understanding of family life" as God intended -- built on a faithful, exclusive and lifelong union between one man and one woman.

"I think the majority of young people want stable relationships, want to live in a family... and therefore, the church has to help them," he said.

"We have to once again strengthen" the sacramental and indissoluble bond of marriage, especially as families today are facing a number of crises, including severe economic difficulties.

The church must also take into account the many situations of Catholics who have failed marriages, he said, adding that "the church has to be close to them, to help, support and encourage them."

"I maintain the full teaching of the church, but the teaching has to be applied to concrete situations, as Jesus did it and as Pope Francis does very often," he said.

"The doctrine of the church is not an ideology in the clouds, but God wants to be present, close to his people," he said.

Show Comments (
3
)
Comments are automatically closed two weeks after an article's initial publication. See our comments policy for more.
Michael Barberi
6 years 7 months ago
Bravo Cardinal Kasper! For once, we have a Cardinal (and may I say a Pope?) that understands that a development of doctrine is what is needed so that it can be morally applied to concrete situations such as the severe circumstances of the divorced and remarried. The answer the magisterium teaches is that anyone who is divorced can never enter again into a marriage and must lead a life of sexual abstinence, regardless of the circumstances. If they remarry (and have sexual relations), they are denied the sacraments of reconciliation and the Eucharist. Perplexingly, the magisterium teaches a pastoral ministry that the doors of the Church and its banquet of love should not be closed to the divorced and remarried. This is like inviting friends over for Thanksgiving but denying them the dinner that you are sharing with other guests. Equally perplexing, the magisterium has not adequately explained Matthew's exception clause (Matt: 5:32 and 19:9). The magisterium's argument that the word 'porneia' is to be understood as an endogamous marriage (e.g., incestuous relations between two people not far enough removed from family ties, and an unlawful marriage) is but one translation. There are two others: (1) extra-marital sexual intercourse, normally considered adultery, and (2) premarital intercourse, normally considered sexual immorality committed by the woman with a man other than the one to whom she is betrothed and before the marriage. The accepted understanding of 'porneia', by Judaism and most Christian Churches, is adultery. The moral dilemma for the magisterium is not to be minimized because the exception clause is not found in Mark and Luke. One answer that most traditionalist theologians offer, but is not compelling, is that Matthew was written later than Mark and Luke, and his Gospel was directed at Jews who allowed for divorce and remarriage for adultery. I doubt Matthew was adding something that Jesus never said. Nevertheless, such disputes may never be completely resolved. However, Cardinal Kasper's suggestion for a development of the doctrine on divorce and remarriage (or marriage) would be a much needed and welcomed solution to this most pressing problem. It was interesting that the Cardinal mentioned that there were doctrines of the Holy Office, before Second Vatican Council, against ecumenism, yet the council found a easy not to destroy or negate that doctrine but found ways to interpret it in an adequate way. Ditto for the teachings on slavery, usury and the torture of heretics. There are many doctrines and teachings about the family, not only the divorced and remarried, that the Synod on the Family will address. We hope and pray their judgment will result in a development of several moral teachings that are plaguing many Catholics families and the Church. Bravo again to Cardinal Kasper and to America Magazine for this article.
Mary Ann Carey
6 years 7 months ago
On March 31, 2014, Cardinal Kasper’s address to the consistory is being published in English exclusively by the American publisher Paulist Press in a book entitled: The Gospel of the Family. The address advocates a stronger appreciation of marriage and the family—even on sensitive issues such as divorce and remarriage.
Mike Evans
6 years 7 months ago
To "re-interpret" the doctrine is simply a euphemistic way of saying the old formulation was simply wrong. A major part of our church's problem is our tendency to want clear cut definitions and statements that leave no gray areas subject to "mercy" in their application. Fortunately, local confessors have been able to do their own application and interpretation in light of individual situations in the privacy of the sacrament. Wiser bishops and cardinals have let this be and even encouraged the continuation of good news to penitents. It would be helpful if more of our stringent Catholics and religious pundits would simply quiet down for a while and let the Holy Spirit work in each local church.