Just a Mother? Recovering the unsung life of Zebedee’s wife 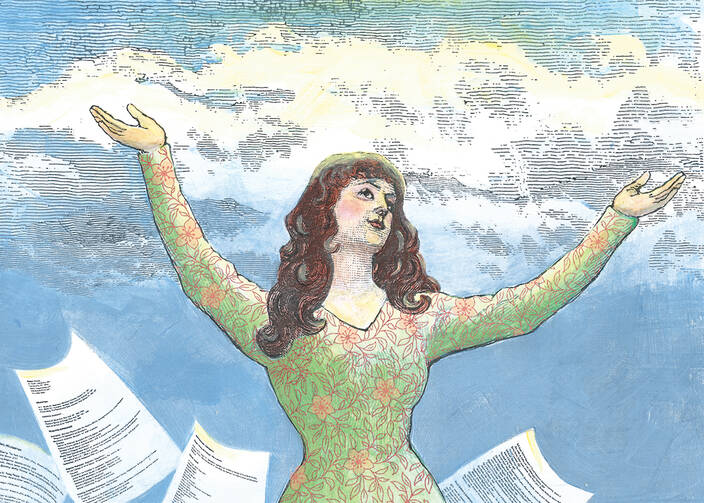 I recently reconnected with a friend I had not seen in over a decade, since our oldest children were toddlers. When I asked what she was doing, she replied, “I’m just at home.” It turns out she is “just at home” raising three children, volunteering for multiple organizations and taking care of an ailing and widowed mother in a city four hours away. Her answer is surprisingly common. Often these days, if you ask someone what they do, and if they are not at the pinnacle of a revered profession, they preface their answer as my friend did: “I just work at…” or “I’m just a….” This is especially likely if you ask a mother, or any “at home” person, regardless of circumstance.

When we are judged based on degrees and titles, on the number of Facebook friends and Twitter followers we have, it is easy to become uncertain of the choices we have made, the paths we have or have not taken. So quickly we seem to lose track of who we are and to whom we belong. So easily we forget that we were made to be holy and live holy lives, and that this has nothing to do with our résumé. We forget that we are truly beloved. We become “just.”

In this world that so often beckons us toward status and self-centered absorption, I sometimes think of Zebedee’s wife, mother of the apostles James and John. Matthew tells how Jesus saw “two other brothers, James, son of Zebedee, and his brother John. They were in a boat with their father Zebedee, preparing their nets. He called them, and immediately they left their boat and their father and followed him” (4:21-22). Zebedee’s wife is not mentioned here; in fact, she is never named in Matthew’s Gospel. Still, after reading this passage, I am haunted by a vision of her stunned and uncomprehending expression when Zebedee returns that evening without her sons. I picture the wooden table laid with bowls and bread, and her savoring a moment of peace before her “sons of thunder” arrive home, while simultaneously looking forward to their boisterous presence. The fire is old but burning, and as she hears the door creak open, a smile breaks, then falls. She sees Zebedee gaze at her and beyond her at the same time. He looks older than he did that morning. Old, and so, so tired. She tries looking around him, then over his shoulder, to catch a glimpse of her sons, but they are not there.

What words, I wonder, did Zebedee use to explain his sons’ opening their hands, dropping their nets and leaving without saying goodbye, all because of just a few brief words from some passing Galilean? Could any suffice? I imagine her, after a moment of stunned silence, walking right past him to flee the house, lest she take her anger out on her husband. Her hands press her hips as she looks up at the night sky; the wind brushes her cheek and she hates it for its futile attempt to comfort. She tries to breathe. Just breathe. It is unfathomable. All those years she sacrificed and loved and hurt, and now they are gone—just gone, and her future most likely gone with them. I picture Zebedee sitting inside, his face leathered from sun and wind, staring down at his dirty, calloused hands, suddenly weary.

When we see her next, circumstances have changed. She is on her knees before Christ, asking him to grant her boys seats to his left and to his right in his kingdom (Mt 20:20). The other disciples call her and her sons arrogant, no doubt whispering in corners, discord arising in the midst of God’s presence on earth. Now she is the mother who wants the best for her sons and is bold enough to fight for it. Perhaps, too, she wishes for reward, and who can blame her? But that she is bold enough to make this request points to a deep relationship with Christ. How did this happen? Did her confusion and curiosity, anger and desire, cause her to cover her head, take a bit of bread and leave her home to seek out this man who stole her sons away? What then did she witness? Did she know him instantly as her sons did?

It must say something about her and her faith that she raised sons who might be chosen by Christ, sons capable of recognizing God when they saw him, letting nothing deter them from following him. So many men might have paused—would have worried about their mother and father, about their own livelihood. What did their mother do right, that these men were open to the call of God? And how many mothers do the same today: quietly, imperceptibly preparing their sons and daughters to hear God’s word in their heart and then letting them go?

Her story does not end with her sons. For as the disciples hide in despair, as Peter, the rock of our church, denies Jesus, this woman stays true. According to Matthew, this woman believes enough to follow Jesus to the cross, “ministering to him” (Mt 27:55). This woman loves enough to mother Christ’s body before burial. This woman most likely stands by Mary’s side at her darkest hour and beyond. Perhaps she is Mary’s friend in the deep way that women sometimes are to one another, standing together in the sea of life’s pain and holding fast.

It is hard in our day to accept that traveling though this world unsung is enough. That the holy acts of praying to our God, raising our children and standing by one another in times of suffering are enough. That the mundane tasks of our day-to-day existence are, in fact, our cross, and that by bearing them with grace we create holiness in our homes and communities.

Zebedee’s wife lives unnamed in the pages of Scripture, raising her children, asking for a blessing from Jesus, standing by Mary at the crucifixion and caring for Jesus’ body in death. She loved Christ and she stands with Christ’s mother; hers was a holy, holy life. We don’t know her name, but Christ does. And when this promise alone, “He calls each of us by name,” becomes enough for us, then we are set free from the false gods and promises that tempt us. We are set free to be loved by our God and to love in return, just to live unsung, holy lives.

Show Comments (
1
)
Comments are automatically closed two weeks after an article's initial publication. See our comments policy for more.
Kathy Perez-Silva
5 years 7 months ago
Even though my children are grown and the challenges have changed this article came to me at a time when I needed it. Thank you for your encouraging and well written article.