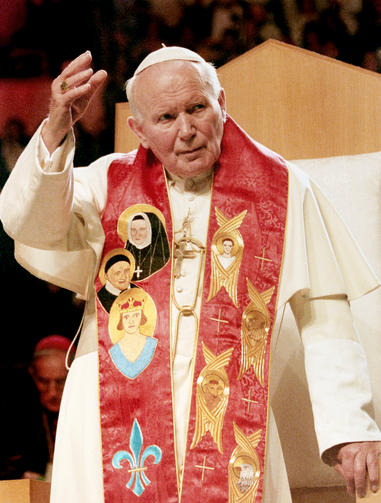 The man who served as Blessed John Paul II's spokesman and media adviser told reporters that the late pope did not initially understand the gravity of the clerical sexual abuse crisis, but once he did he immediately took strong steps to deal with it.

Joaquin Navarro-Valls, who served as papal spokesman into the first months of Pope Benedict XVI's papacy, also said the church's canonical process against Father Marcial Maciel Degollado, founder of the Legionaries of Christ, began under Pope John Paul, but was not concluded until after his death, so the late pope could not have known for sure the allegations were true.

Meeting reporters at the Vatican on April 25, both Navarro-Valls and George Weigel, a biographer of Pope John Paul, were asked about the pope's knowledge of and reaction to the clerical sexual abuse crisis.

Navarro-Valls told reporters that when the abuse crisis became public, "I don't think he understood" how serious it was, "but I don't think anyone did."

Calling clerical sexual abuse a "cancer," Navarro-Valls said it became known publicly "in a geographically limited area, the United States, and with isolated cases," many of which were reported around 2000, but "had taken place 20 or 30 years earlier."

"That does not make the problem any less serious," he said, but with the "purity" of Pope John Paul's thinking, particularly his attitudes toward children and about the priesthood, "this was unbelievable."

"One of the important decisions," he said, was to give the Congregation for the Doctrine of the Faith responsibility for handling the cases.

As the April 27 celebration of Blessed John Paul's canonization approached and critics raised questions specifically about the late pope's relationship to the Legionaries of Christ, Navarro-Valls said he has fielded dozens of questions about what Pope John Paul knew about decades of allegations that Father Maciel abused seminarians and was living a double life.

Pope John Paul did not ignore the allegations, he said, but he could not know the results of the Vatican investigation, which began during his papacy and concluded during the first year of the papacy of Pope Benedict. "I was the one who gave the announcement about the result of that inquest," he added.

In 2006, Pope Benedict ordered Father Maciel to withdraw to a life of "prayer and penance" and to abstain from public ministry. The doctrinal congregation said it would not pursue the canonical process of removing him from the priesthood given his advanced age. The Legionaries' founder was 86 at the time.

Weigel, the biographer, also was asked about the scandal.

"I think the only way to think about that comprehensibly is to understand that John Paul II was a great reformer of the Catholic priesthood," he said. "The Catholic priesthood in 1978 was in the worst condition it had been in since the 16th century. Thousands of priests had left the active ministry. We now know that a small minority of priests were involved in horrible crimes and grave sins. Seminary formation was weak. All of that was changed over the next 26 and a half years. So the first thing to be said about John Paul II and the crisis of sexual abuse of the young is that he was a great reformer of the priesthood."

In addition, he said, "I think there was an information gap, particularly between the United States and the Holy See, in the first months of 2002," when the crisis exploded in the Archdiocese of Boston, "so that the pope was not living this crisis in real time as we were in the United States. But once he became fully informed in April of that year, he acted decisively to deal with these problems."