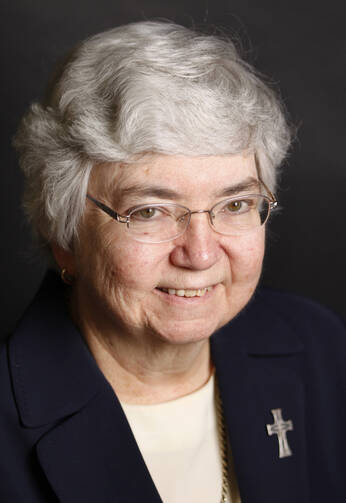 Sister Mary Ann Walsh, a journalist and a longtime spokeswoman for the U.S. Conference of Catholic Bishops, died on April 28 after a struggle with a recurring cancer. True to form, she transformed her last days into an opportunity for a final, lesson in living with dignity and grace. Her experience of cancer “is like a living wake,” she said in one of her last interviews. “You get letters from people telling you all that you did and you had no idea. ‘You helped us with our marriage. You helped us with our adoption. My husband was sick with depression and you were there for us.’ And I wonder, ‘When did I do all that?’ It’s humbling.”

She was 68 and passed away in a hospice in Albany next to the regional convent of the religious order she entered as a 17-year-old novice in 1964. In March, the Catholic Press Association had given her its highest honor, the St. Francis de Sales Award, which recognizes lifetime achievement in Catholic media.

“The editors, staff and supporters of America mourn the passing of Sr. Mary Ann Walsh, America’s U.S. Church Correspondent,” America Editor-in-Chief Matt Malone, S.J., said in a statement yesterday. “Sr. Walsh was a valued colleague and friend, a writer of exceptional talent and insight, whose faith animated her entire life.

“As the first female religious to serve on the editorial staff of America, Sr. Walsh was a trailblazer,” Father Malone said, “even in this last phase of her professional life, a career that spanned four impressive decades. Our readers, especially, will miss her expertise, her generosity and her honesty. Our prayers are with her family, friends and fellow sisters. May she rest in peace with the Lord she loved and served so well.”

Father Drew Christiansen, S.J., former editor in chief at America and currently Distinguished Professor of Ethics and Global Development at Georgetown University is a former colleague of Sister Mary Ann's at the bishops' conference and, as a journalist and editor, often worked with her. “I admired her steadiness of character and inventiveness in exercising her often difficult responsibilities,” he said. “But nothing became her in life as her passage from it, with so many of her sisters gathered around her week after week and tending to her. She and they gave us all a model of a Christian death.”

“The passing of Sister Mary Ann Walsh leaves a chasm of a hole in the hearts of those who knew her for she was a delightful and generous friend and colleague,” said Daniel Mulhall, who worked with Sister Walsh at the U.S.C.C.B. “It leaves an even bigger hole in the field of Catholic journalism. She represented the U.S. bishops impeccably well, making sure they always looked wise and intelligent.”

Walsh had moved to her native Albany from Washington last September after it was discovered that the cancer that had been in remission since 2010 had returned. She was able to receive better care there and live out her days with other members of the Sisters of Mercy.

“Sister Mary Ann,” as she was known to the many journalists she sparred and joked with and, with regularity, befriended, worked at the communications office of the American hierarchy for 20 years, retiring in the summer of 2014 just before she fell ill again.

She became director of media relations for the U.S. Conference of Catholic Bishops—the first woman to hold that position—after coordinating media for World Youth Day in Denver in 1993, which featured an enormously successful visit by then-Pope John Paul II.

She was born in Albany on Feb. 25, 1947, the only daughter of Irish immigrants, and as a high school student had been drawn to the Sisters of Mercy and their commitment of service to the poor, especially women and children. From the start it was clear that Walsh was a gifted writer. She earned a master’s degree in English from the College of St. Rose as well as a master’s degree in pastoral counseling from Loyola College of Maryland—and she began her journalism career at the Albany diocesan newspaper, The Evangelist.

She later went on to work as a correspondent for Catholic News Service in Rome and Washington before taking the U.S.C.C.B. job. Walsh coordinated media for the U.S. cardinals during the papal conclaves in 2005 and 2013, and she edited books on John Paul II and Benedict XVI. She also produced videos for the conference and regularly wrote op-eds in secular media outlets explaining and defending the hierarchy’s positions.

Last summer, Sister Mary Ann left her role at the conference to join America. Her topics for America have, among others, included the rising cost of college; leadership roles for women in the church; who she'd like to send a Valentine to; the declining number of Catholic funerals; "Why Go to Mass?"; Cardinal Sean P. O'Malley of Boston's appearance on "60 Minutes"; and why the church should stay in the business of civil marriage. She had a chance to conduct one of the last interviews with Chicago's Cardinal Francis George.

"It's the ideal job, a job of opinion, after working in an institution that thought opinion was anathema," she said in February interview with Catholic News Service. She described reporting and her work at the U.S.C.C.B. as "The Joe Friday approach: the facts ma'am, just the facts."

"Now I'm entitled to have an opinion."

After decades as a reporter and then in a role in which she wrote bishops' statements, speeches and press releases, getting to unleash her own views was “an unusual feeling," she had said. "I don't think of myself as having some great opinion the world is waiting for.” Her friends and family probably disagree.

Just before she left the U.S.C.C.B. she fell ill, and doctors discovered that the breast cancer that had appeared to be in remission since 2010 had returned with a vengeance.

“My oncologist was stunned, my primary care doctor was stunned and I was stunned that I had this aggressive, turbo-charged cancer,” Walsh said later.

In an account of her illness written by her community, Walsh received prayers and good wishes from many people she had known through her life and she struggled to let herself be taken care of, instead of the other way around.

“I find it hard to receive mercy,” she said in a brief video posted by the Mercy sisters. “I’m used to being independent, and if somebody helps me put on my shoes, for example, that’s humbling. I don’t expect it.

“Mercy has jumped in from every corner to help me, in ways both large and small,” she said. “I want for nothing.”

Her friends and colleagues remember her professionalism, talent and “grace under pressure.”

“She treated everyone with dignity and respect,” remembered Dan Mulhall, “even those who refused to treat her in the same way. She was a tough nut when she had to be, never cracking under the pressure of a papal visit or the stampede that accompanied the Dallas meeting that produced the Child protection Charter. She truly was grace under pressure. She could be terribly funny when the cameras were off but never faltered when facing reporters, always making the Church and the U.S.C.C.B. she loved shine like a Christmas ornament. Farewell, dear sister, farewell.”

“Sister Mary Ann was truly a daughter of Catherine McAuley and a woman of the Church,” said Sister Sharon Euart, R.S.M., J.C.D. “She loved being a Sister of Mercy and a journalist covering the Church. Her combination of wisdom and wit endeared her to all who knew and loved her. I will remember her wonderful gifts and her greeting each morning when we both worked at the U.S.C.C.B.—‘Sharon, what do you know and what can you tell me?' May she now know God’s eternal peace.”

Dr. Eugene Fisher, Distinguished Professor of Theology at Saint Leo University, remembered Sister Walsh as “a woman of strong faith, both in God and in humanity. One may say that she embodied Jesus' great commandments, love of God and neighbor.

“I worked with her for some time at the U.S.C.C.B. She was able speak for the bishops and, in doing so with wisdom and clarity, speak to the bishops. Also, she was there for many of us on the Conference staff when we needed a sympathetic ear whether professionally or personally. I had and have great admiration for her.”

Kathleen McChesney, one-time Executive Director of the U.S. bishops’ Office of Child and Youth Protection, said, “I had the privilege of meeting and working with Sister Mary Ann Walsh at the U.S.C.C.B. where she was a mentor and a friend to my colleagues and me. Mary Ann's love for her faith was apparent in all that she did, as well as in her beautiful articles and books. Her personal demeanor never wavered from the ideals of the Catholic Church and her humility and sensitivity to the plight of others was a model for many who aspired to be more like her. Her humor, dry and quick, was often the key to putting a difficult issue in perspective. Her passing is our loss and Heaven's gain.”

From AP, CNS, RNS, Staff and other sources
Show Comments (
1
)
Comments are automatically closed two weeks after an article's initial publication. See our comments policy for more.
Robert O'Connell
7 years 3 months ago
Fr. Christiansen need not worry: the angels and Lazarus, along with all the others saints and the Trinity have surely welcomed her in splendor. Hopefully, she will help the rest of us follow.