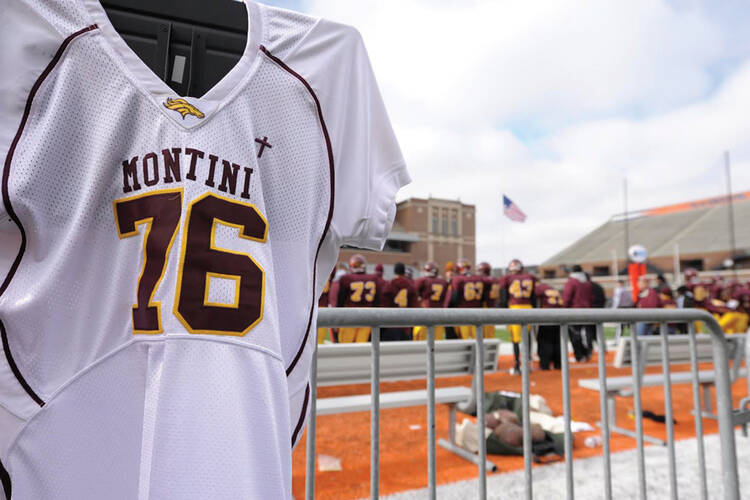 It is 8 a.m. Monday, time for morning prayer. The principal comes on the loud speaker, her voice especially shaky. Everyone knows. Still, I tense up when she says, “Students, come meet me in the gym.” My class gets up and we go. No one in the halls dares to speak one word.

When we get to the gym, the seniors sit apart from the sophomore class—the upperclassmen on the bigger side of the gym and the underclassmen across from us. It is how every pep rally has been in the past. But this gathering feels nothing like past events. The principal comes to the single podium in the bare gym. I put my head down preparing myself for the worst. During her speech, I look up only once. A sophomore catches my eye, her body shaking and sobbing. She looks at me. Even though I am 100 feet away from her, I can see the anguish in her eyes. They seem to call out to me to hold her and comfort her.

When the words “Johnny Weiger passed away last night” fill the gym, our innocence is taken away in a single breath. He was 16. He was a bigger part of the school than the four-peat in football, the petty drama throughout the cliques and the school legends combined. He was more of a symbol of our Catholic high school than the mascot itself. In that moment people knew our school as the school that Johnny attended, the school that, for once, cared about more than football.

Johnny passed on Nov. 4, 2012, after a long battle with chronic myeloid leukemia. Countless prayer services, trips to the hospital and fund-raisers were held before he died. Monday, Nov. 5, held a whole different kind of hope and faith. We no longer had prayer services to pray for his health; no one went to the hospital to visit him; fund-raisers were not organized to help with the constant stream of bills. Instead, prayer services became a time to pray for those who had died and a time to thank God for the blessings in our lives. Trips to the hospital were to visit other children suffering. Longstanding fund-raisers for other causes were taken more seriously, with more and more money flowing to those less fortunate. Suddenly, it felt as if, no matter your relationship with Johnny, you knew him. Everyone knew Johnny. Everyone loved Johnny. Everyone prayed for Johnny. All because Johnny had moved so many people.

There was no distinction among classes that Monday. Actually, there was no distinction that whole week. We were ready to help one another at a snap of the fingers. Johnny’s life and death brought our school together. He brought opposing teams together. He even brought opposing schools together. Before a football game with our rival school, the two teams came together in the middle of Duffy Stadium to hold hands and pray as one Catholic body for one boy. Football is a big deal at our school, so having two teams come together to benefit one family and one boy didn’t go unnoticed. Our rivals even came to support us in the Illinois State title game just because of how this one, single boy transformed them.

For the first time, we saw truth in a statement all too often dismissed as a cliché: We were one body in Christ. I believe that something good can always come out of something terrible. It was so hard to see it then, but now, looking back, I’ve never felt a bigger sense of community. School was cancelled, and kids were bused down to the funeral. During the Kairos retreat going on that week an hour away from the school, retreatants were transported to the funeral after special time had been carved out of the retreat. Students wore specially made fund-raising T-shirts. Teams played games with Johnny in mind. Our emotions were so raw. No one was alone, and everyone knew it.

Johnny touched not only my life, but countless lives all around us. He taught us that the most important relationship to have in life is the relationship with God. Even through his pain and suffering, Johnny was there praying, believing and filled with hope. Johnny was and still is a special kid who will always have a place in innumerable lives. All these emotions arrived, despite the fact that Johnny and I didn’t really know each other. In fact, I never even spoke with him—yet his life and death continue to speak volumes to me.

Marie Kalas, a graduate of Montini Catholic High School in Lombard, Ill., is going into her sophomore year at Indiana University in Bloomington.