Intimacy Issues: The disappointing platitudes of 'The Sessions' 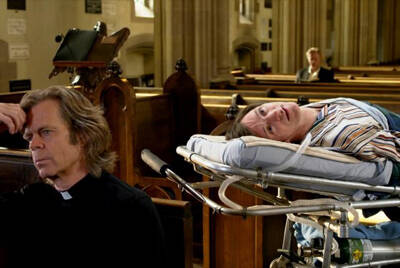 Mark O’Brien contracted polio at the age of 6 and was confined to an iron lung for most of his life. Despite this, he managed to study at U.C. Berkley, navigate campus in an electric gurney and become a working journalist. Mark was also a Catholic and a man who longed for love as much as he feared it. Before his death in 1999 at the age of 49, he lived a fascinating, complicated life, which was depicted, in part, in the 1996 documentary "Breathing Lessons: The Life and Work of Mark O’Brien," which later won an Academy Award. Now, the narrative film "The Sessions" attempts to tell his story once more. This time around, the focus is mainly on the complications surrounding Mark's sex life, or lack thereof.

Based largely on a highly personal, detailed and at times graphic essay titled “On Seeing a Sex Surrogate,” which was published in The Sun, among other places, the film describes the then 36-year-old Mark’s (a moving and convincing John Hawkes) efforts to overcome his anxiety regarding any sort of intimacy through sessions with a sex surrogate, Cheryl (a very fit Helen hunt). The theory behind the therapy is that, through a series of six to eight sessions, Mark and the surrogate will use "body awareness exercises" and, eventually, sex, as a way to deal with Mark's anxiety, as well as his low self esteem and lack of self worth.

In the film, as he did in real life, prior to the sessions Mark seeks advice from Father Brendan (William H. Macy sporting a floppy surfer hairstyle), a Catholic priest, "as a friend." After gazing at a statue of Jesus for approximately three seconds (as if this is how all priests make decisions), Father Brendan says, “In my heart I feel like He’ll give you a free pass on this one. Go for it.” (The real-life priest told him: “Jesus was never big on rules.)

Often, the Father Brendan character appears to be at a loss. “All I have are vague ideas of life and death that we priests are equipped with,” he tells Mark. His character constantly spouts platitudes that make him sound like his seminary training took place in the self-help section of Barnes & Noble. Was Father Brendan’s answer a compassionate, pastoral response or a condescending misguided one? The film never digs deep enough into Mark’s thoughts or Father Brendan’s theology to explore this question in full. If Father Brendan is the epitome of chill—exemplified by his flowing hair and willingness to drink beer—the church he works for is depicted as the opposite.

In “The Sessions” the church is a place that offers mainly blame, guilt and shame. God is largely a scapegoat. The film depicts Mark’s religion at best as a kind of salve to soothe anxiety, and at worse a force of crushing guilt that renders him incapable of finding joy in intimacy. The church’s view of sex is more nuanced than the film gives it credit for; instead “The Sessions” opts for several glib, oversimplified interpretations.

“The church did not appreciate my attitude toward sex.” Cheryl tells Mark.

“You had an attitude toward sex?” he asks.

A film review is not the place for debate about the morality of Mark's real-life actions, but the portrayal of his actions in the film merits discussion. The film conflates two questions. The first is whether Mark should or should not have sex, and the second is whether or not one is defined by ones sexuality. Mark’s experience with Cheryl results in feelings of empowerment for him, followed by heartbreak when he becomes emotionally attached to her. Throughout, he struggles with feelings that “either God or [his] parents will intervene to stop this.”

Father Brendan's reaction? “It’s amazing to me how often God is brought into the sex act,” the priest says, as though this idea would overcomplicate something simple and pure, and ignoring the fact that in Catholic theology, the God that is Love should never be apart from it.  Unfortunately the film depicts such intimacy as more about self discovery than a shared love and relationship. After his first session, Mark states that he feels “cleansed and victorious,” echoing his real-life sentiments at the time. The characters embrace the idea of celebrating their bodies, but without the element of a relationship, they are seemingly reduced to them.

In his article in The Sun, the real-life Mark wrote about the feelings of guilt and shame that surrounded his thoughts about sex. He writes about struggling with the fact that he feels not just unloved but unworthy of love. He wrestles not simply with the feelings of sexuality, but whether or not it was legitimate for him to have such feelings. Mark wrote the beginning of the essay soon after ending his sessions ended, but the final paragraphs were written four years later, which gives him the ability to view the events from a distance.

Mark writes: “I knew I could change my perception of myself as a bumbling, indecisive clod, not just by having sex with someone, but by taking charge of my life and trusting myself enough to make decisions.” He recalls sex as a “gentle, mutually playful experience,” but writes that “[s]ex for the sake of sex alone has little appeal to me because it seems like a ceremony whose meaning has been forgotten.”

He acknowledges fearing both rejection and love. And, in a sentiment absent from the film, he acknowledges that the sessions with Cheryl, while helpful and thrilling in some ways, did not alter his personality or extinguish his biggest struggles. Life, he says, “hasn’t changed.”

He writes: “I wonder whether seeing Cheryl was worth it, not in terms of the money but in hopes raised and never fulfilled. I blame neither Cheryl nor myself for this feeling of letdown. Our culture values youth, health, and good looks, along with instant solutions. If I had received intensive psychotherapy from the time I got polio to the present, would I have needed to see a sex surrogate?”

In one scene in the film, Mark and Cheryl lie beside each other in bed, and Mark asks, “What happens when people become attached and attracted to each other?”

“They write poems and have sex,” Cheryl tells him.

When Mark wonders what happens next, she replies, “They leave it at love and attraction or make it complicated like most people do.”

Unfortunately for the viewer, “The Sessions” doesn’t make things quite complicated enough.

Kerry Weber is an associate editor at America.

The film conflates two questions-whether Mark should or should not have sex and whether or not one is defined by ones sexuality-because the answers are yes and yes, and to a profound degree.

I commend you for taking this on, Kerry.  The thing about sexuality is that it goes so deeply into our psyches (and souls), and there is a lot of dark (and irrational) energy that goes with it.  Sexual intimacy outside of committed relationship is destined to be somewhat superficial, in my opinion - just another ego-mask.  Yet we are sexual human beings, and most often fail to reach the ideal, especially where sex is concerned.  Does that make it wrong?  There is something very touching in Mr. O'Brien's need for intimacy and his willingness to take that risk even when it ends in heartbreak.

I don't know that celibate religious or clergy are the people to convey this mystery.  The consultation with Fr. Brendan insinuates that he would know the "right answer", or was needed for "permission".   I wish that the Catholic Church had a Theology of Sexuality that goes deeper than just "permissions" or "bans" to help us here.

In "Evangelium Vitae", Pope John Paul II invited the laity to teach young people about sexuality.  As a project, this would be most interesting and useful.  How does a church community convey both the mystery and sacredness of sexuality?  It would have to be in church - upstairs, not in the basement.  If it is sacred, it belongs upstairs with everything else that is sacred.  Working on such a project would make church an interesting place.

D M
8 years 11 months ago
Look no further than Theology of the Body literature for the latest, greatest, and healthiest Catholic view of sex yet. #1 Kevin if we are defined by our sexuality what about babies and the old and frail? I dont think their sexuality is relevant at their points in life yet they still have dignity, individuality, and worth. Summing up a person solely as a sexual being as opposed to a being with a sexuality along with many other qualities is narrow, utilitarian, and limits all that God has meant for us to be.