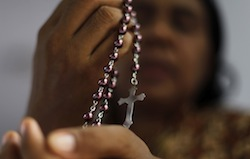 The Indonesian government is failing to protect the country’s religious minorities from growing intolerance and violence, Human Rights Watch said in a new report. The report documents government failure to confront militant groups, whose harassment and assaults on houses of worship and members of religious minorities have become increasingly aggressive. Those targeted include Ahmadiyahs, Christians and Shiite Muslims. The Jakarta-based Setara Institute, which monitors religious freedom in Indonesia, reported a rise in violent attacks on religious minorities to 264 in 2012, from 244 in 2011. “The Indonesian government’s failure to take decisive action to protect religious minorities from threats and violence is undermining its claims to being a rights-respecting democracy,” said Brad Adams, Asia director at Human Rights Watch. “National leadership is essential. [President Susilo Bambang] Yudhoyono needs to insist that national laws be enforced, announce that every violent attack will be prosecuted, and map out a comprehensive strategy to combat rising religious intolerance.”

Show Comments (
1
)
Comments are automatically closed two weeks after an article's initial publication. See our comments policy for more.
Chris NUNEZ
7 years 7 months ago
I appreciate the updates on religious freedom throughout the world, and the failure to protect those freedoms. But I would much prefer to have included in these reports what the source of animosity is that fuels these disturbances. We know political competition is often at the bottom, but the 'reason' and the 'rationale' fueling these hostilities would be very helpful.

This article also appeared in print, under the headline “Indonesia: Religious Minorities Threatened,” in the March 18, 2013, issue.