The Hunted and the Haunted: Kathryn Bigelow's 'Zero Dark Thirty' 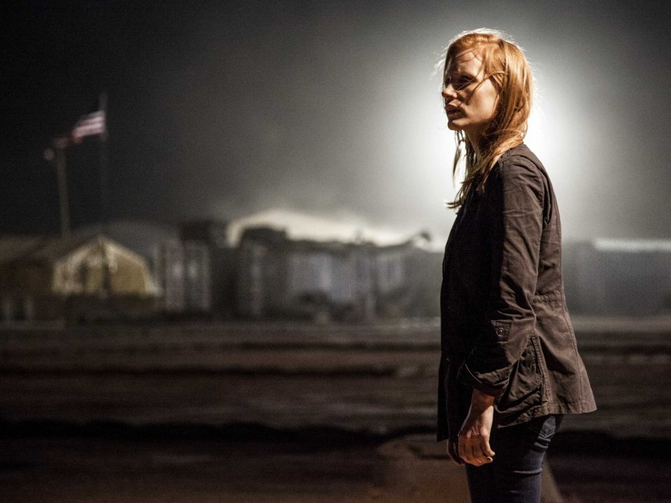 Many of the more talked-about movies this season concern themselves with barbarity, in one manifestation or another. “Lincoln,” is about slavery; “Argo,” imperialism, radical fundamentalism, sociopathic politics; “Les Misérables”—where can you even begin? They are very different movies, of course, but they share a common impulse: Regarding the inhuman, the uncivilized or the cruel, they are pretty much against it.

Zero Dark Thirty, the much-discussed thriller about the hunt for Osama bin Laden, takes a slightly different point of view. As many readers already know, the film—directed by the Oscar-winning Kathryn Bigelow (“The Hurt Locker”) and written by her partner/producer Mark Boal—proffers a shall-we-say generous view of the “enhanced interrogation” techniques so popular with the Bush administration in the understandably hysterical moment following the terrorist attacks of Sept. 11. It should be said, right away, that the film is gripping, masterfully executed, engaging, revelatory and enormously entertaining. It also takes the strategically brilliant dramatic tact of steering all the audience’s emotional equity into one character, Maya, an agent for the Central Intelligence Agency, whose single-mindedness would earn the admiration of al Qaeda. As played by the seemingly omnipresent Jessica Chastain, Maya is attractive, vulnerable and sympathetic enough to put flesh and blood on a story that is largely about electronic surveillance, track-and-trace technology and the less-than-cinematic wonders of G.P.S.

It should also be said that Chastain, who has been accused in some quarters of giving a “chilly” or “remote” performance, does exactly what she is supposed to do. Maya is something close to a lunatic, manically engaged in finding the mastermind of the Sept. 11 attacks to a degree that precludes her having any other life. One could say that Bigelow and Boal do not give us enough information about Maya, not enough backstory. But there isn’t any. As we learn, she was recruited out of high school to join the C.I.A. and has been religiously devoted to bin Laden ever since. (If there’s romance in “Zero Dark Thirty” it is between hunter and prey.) Her C.I.A. boss, played by James Gandolfini, an unlikely sub for Defense Secretary Leon Panetta, asks her what she has done for the agency besides hunt for bin Laden. “I’ve done nothing else,” she says. She’s Nancy Drew, with obsessive-compulsive disorder.

In a very encouraging sense, Maya is a stand-in for an America that was, and seemingly is (see: drones), willing to abandon democratic principles to kill its enemies.

But there also seems very little doubt that Bigelow and Boal drank the intelligence community Kool-Aid. When it was learned early on that the “Zero Dark Thirty” project was receiving privileged access to Department of Defense and C.I.A. information surrounding the bin Laden pursuit, there was a knee-jerk outcry among certain congressional Republicans that a pro-Obama film was in the works. (The project was under way well before bin Laden’s 2011 killing and had to be quickly refashioned.) The fears were unfounded. President Barack Obama, circa 2009, does make an appearance in the film, on a television, decrying the use of torture and the damage it has done to America’s moral standing in the world. The film shakes its head in disgust.

The head-shaking should be on the other side of the screen. Without going into too much excruciating detail, suffice to say that “Zero Dark Thirty” reaches the indirect but unavoidable conclusion that torture worked, that the key piece of information that led to bin Laden was achieved through waterboarding and the variety of deprivations suffered by detainees. It also suggests, in a manner that only film can do, that a government that forbids enhanced interrogation is tying the hands of its overseas operatives, who have much more important things to worry about than petty politics back home.

This ignores the conclusions reached by the petty politicians on the Senate Intelligence Committee, who includ John McCain, the Republican senator from Arizona. Their study of the C.I.A.’s detention and interrogation program concluded—following the examination of more than 6 million pages of records from the intelligence community—that the C.I.A. did not obtain its first clues about the identity of bin Laden’s courier from “C.I.A. detainees subjected to coercive interrogation techniques.”

But saying otherwise certainly makes for exhilarating cinema. The torture scenes that follow the very opening of the movie—a series of voices in the darkness, from people trapped in the World Trade Center, and whose plight deftly sets up the movie’s revenge mechanism—are deeply disturbing. They dehumanize the “heroes” as much as the “villains”—which was one of the critical findings, following the investigations into the Abu Ghraib and Bagram and Guantánamo detention centers. One of the things “Zero Dark Thirty” does not do is a dance of victory after the death of bin Laden. No one is more conflicted in the end than Maya, who has spent ten years and her entire young adulthood in search of a something that makes her feel, after all the intrigue, violence and loss, like she’s suspended in a vacuum.

“Zero Dark Thirty” is a magnificent movie, if we ignore the moral ambiguities. But can we? Louis-Ferdinand Céline was a rabid anti-Semite, Ezra Pound was a fascist, Leni Riefenstahl was a propagandist for Hitler. But no reasonable person would say they were not great artists, or that their work is not worth viewing or reading, albeit with caution. All art is about truth and each artist arrives at his or her own version, presumably after careful consideration of the alternatives (which, perhaps, is why fundamentalists are not usually artists, and Hitler was a bad painter). What adds to the disturbance surrounding “Zero Dark Thirty” is its makers’ insistence that what they have done is both truth and just a movie. Bigelow has repeatedly called her new work a “reported film,” and she wields a palette of documentary techniques in applying a coat of veracity to her time-compressed story. At the same time, she and Boal—who reported the reported film—counter accusations of being pro-torture (or, rather, not vehemently enough against it) with the claim that their movie is told from the perspective of the participants, and therefore should be viewed with the cocked eyebrow with which we address any work of fiction.

Can they have it both ways? Of course they can. And they do. Several critics groups, including the New York Film Critics Circle (to which this reviewer belongs) have named it the best picture of 2012, even if a certain voter’s remorse seems to have settled in. It will be interesting to see whether Hollywood, with its allegedly leftist leanings, will endorse a film that takes such a controversial position, and whose director seems genuinely dismayed at the reactions she has gotten. One way of defining art, after all, is something that achieves exactly the effect its maker intended. If ambiguity was Bigelow’s intention, she has created a masterpiece.

I left a similar comment to a previous article in America which talked about ZERO and ARGO. Pertinent to this piece, I would offer that Maya is also a stand in for the younger generations post 9-11 who are the recipients of an ambiguous history and cultural reaction to events they were too young to experience first hand. Instead, they are compressed between the sound bites and clips of the Towers falling and the 9-11 taped calls on one hand and the aftermath of "the war on terror" that has gone both underground and turned to drone warfare.
The death of Osama collapsed like the fall of the Berlin Wall and the toppling of Sadam's statue: visceral, maybe even visual and cathartic, but also alien to one's personal history and effect. It leaves such a generation with the ambiguity of answering questions like those posed to Maya at the end of the film: You can go anywhere now, where do you want to go?
In today's world we are debating gun safety at home and our military footprint abroad. We want women properly acknowledged in combat operations but are fighting over how many guns should surround our youth. If there's any lasting take away, it's that America does best when it has a clear, evil enemy to declare war against, but we don't seem to have the moral depth to inherit, possess, no less envision what victory might actually look like or achieve.

Christopher Rushlau
8 years 7 months ago
This movie's plot seems to be, "We caught the uppity n*gg*er and we strung him up good and proper." That also seems to be the plot of the review and your comment. There is ambiguity in life. Right now I cannot tell you what is going on behind my back in this room where I sit. A gaping hole may have been torn in the space-time fabric. I may indeed be dozing in front of my fireplace in 18-what-not like the famous Bishop Berkeley. But it seems that Osama was captured and executed by command of the US President, to general rejoicing within the Boston-DC Corridor. I used to joke that you couldn't make a movie where a guy walks down a street killing a bunch of people, period. Then the Coen brothers made "No Country for Old Men" and it won lots of awards. As Aquinas says, the senses do not lie. If it seems your country is being run by a lynch mob, you have to deal with things as if that is the case.