Hunger for Change: The urgent message of 'A Place at the Table' 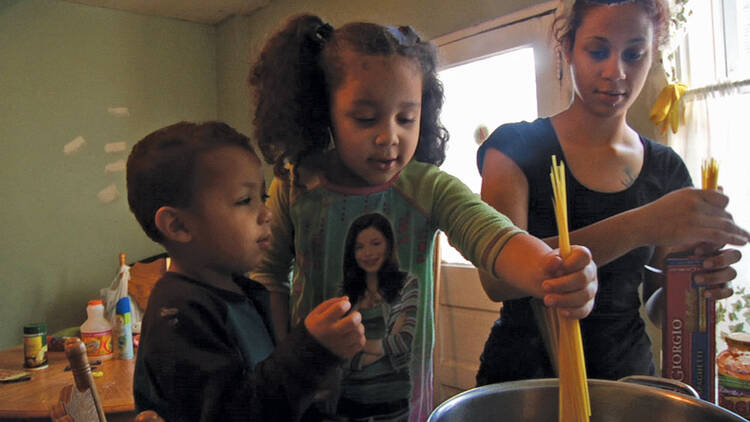 Close-knit” and “desperate” are terms used to describe Collbran, Colo., the very white, very western town featured in A Place at the Table, the revelatory new documentary about hunger in the United States. Collbran serves its movie well: Girdled by the Rockies, rustic and charming, the town has God in its heart and a gnawing in its stomach. Despite its veneer of normality, Collbran is full of people who cannot get enough to eat and, blessedly, a surfeit of people who want to help and do so.

Just what, exactly, constitutes normality anymore in these United States is what “A Place of the Table” tries to get its audience to wrap its head around. It is a movie that speaks to the once unspeakable—that America cannot feed itself—although a reviewer in The New York Times said the film reveals “little that a moderately informed viewer won’t already know.” Really? This presumes that most people are already aware of the following: that 50 million Americans—one out of four of them children—currently suffer “food insecurity,” i.e. an uncertainty about where the next meal is coming from; that a sizable portion of people otherwise eligible for U.S. military service are considered unfit due to improper nutrition; that the corporate welfare Congress happily ladles into the trough of agribusiness each year helps keep fast food affordable and healthy produce increasingly unattainable; that obesity is an outgrowth of poverty; and that hunger is not limited to single mothers on food stamps in Philadelphia. It is part of the undernourished fabric of life in Collbran, Colo.

The film, directed by Kristi Jacobson and Lori Silverbush, is full of statistics and catchy graphics and some terrific music by The Civil Wars and by the film’s music producer, T-Bone Burnett (even if he insists on imposing all-too-predictable bottleneck-guitar riffs on the movie when it visits Mississippi). It also has interviews: We hear from Tom Colicchio, who is a celebrity chef and hunger activist (he is also married to Silverbush and is one of the film’s executive producers); from the food-policy writer Raj Patel (author of Stuffed and Starved); from Marion Nestle, a longtime professor of public health and nutrition; and with Billy Shore, the head of Share Our Strength, the organization behind the No Kid Hungry campaign, whose spokesman is the actor Jeff Bridges.

It is a curious moment when Bridges enters the film; all kinds of things become clear. One is that an Oscar-winning actor can deliver a much better sales pitch than most of the film’s other on-screen evangelists, especially when that actor has been devoting himself to the hunger issue for more than 30 years. But Bridges’s matter-of-fact pronouncements, which are stirring, also make a somewhat depressing statement about public discourse in the United States, whether it is about childhood hunger or anything else—namely, that it is almost impossible to get traction in this country by making a moral argument about public policy.

A fatal mistake would have been for “A Place at the Table” (formerly titled “Finding North,” after the song by The Civil Wars that bookends the movie) to suggest that anyone is entitled to anything. The filmmakers avoid this, almost religiously. As is pointed out, one of the reasons hunger goes unnoticed in this country is that the people suffering are ashamed. For all the self-serving, elitist blather about welfare cheats and 47 percenters sucking at the public teat, very few Americans are immune to the humiliation that accompanies having to ask anyone for anything. Which is why the movie is so valuable: It brings a problem out of a closet whose door is virtually nailed shut—not by those at fault, but by their victims.

When Bridges begins to frame the issue as one of national security or patriotism or even national ego—What kind of country to do you want? he asks, one in which very fourth child goes to bed hungry?<\a>you can feel the walls of resistance collapsing. Frame the problem in terms of its cost, in other words, and you may have a winning argument. It costs the United States when its people go unfed. There are long-term costs to health, productivity and education when a country allows its people to go unfed. It is slightly shameful, but when “A Place at the Table” implies that the poor should be fed because it is merely the right thing to do, one can feel the unconverted finding their escape route out of the argument.

This recognizes the state of American political thinking circa 2013, despite all the alleged Christianity occupying the center ring of our political circus—little of which recognizes the call to do unto others, or sell what you own and give the money to the poor, or the spiritual balm to be found within the Gospel of Matthew (“I was hungry and you gave me food, I was thirsty and you gave me drink...”). Jesus said the poor will always be with us. So why bother?

The devoutly Catholic and unlikely disciple Stephen Colbert recently put it rather succinctly: “If this is going to be a Christian nation that doesn’t help the poor, either we have to pretend that Jesus was just as selfish as we are, or we’ve got to acknowledge that He commanded us to love the poor and serve the needy without condition and then admit that we just don’t want to do it.”

Smartly, “A Place at the Table” does not lean on Stephen Colbert or Christ to make its arguments, but it does use its people to great effect. Rosie, a sweet-faced fifth-grader from Collbran, was falling behind in school until her teacher, Leslie Nichols, spotted in the girl something she once experienced herself: an inability to learn, due to a nagging hunger. Rosie, thankfully, now gets food deliveries via Nichols, who volunteers with Pastor Bob Wilson of the Plateau Valley Assembly of God in Collbran, a church whose food-bank efforts are enormous. (For Rosie, getting the food delivery is like Christmas.) The point made repeatedly, however, is that all the private-sector charity in the world—all the thousands and thousands of points of light that a government might hope will fill its shoes—are not the solution to a national problem rooted in unwise and even corrupt food and welfare policies. Barbie Izquierdo, a funny, articulate, unemployed single mom in Philadelphia, gets a job and loses her benefits, leaving her in worse shape than before. It is hard to pull yourself up by the bootstraps when the government is confiscating your sandals.

It should not be cheaper to feed a family at McDonald’s than at the produce section of a supermarket. But as the documentary tells us—and this really is no secret—farm subsidies support the wrong foods for the wrong reasons, and the government, a government supposedly of, for and by the people, is not on our side when it comes to food. “A Place at the Table,” meanwhile, is on the side of the angels—even if it takes great care not to mention them.

Show Comments (
1
)
Comments are automatically closed two weeks after an article's initial publication. See our comments policy for more.
Thanh Ben Mansour
9 years 3 months ago
There is too much food wastage in the US! If only we would donate more to the hungry, we would go a long way to food security for all.