Catholic vote not as monolithic as it once was, but still important

Catholic vote not as monolithic as it once was, but still important 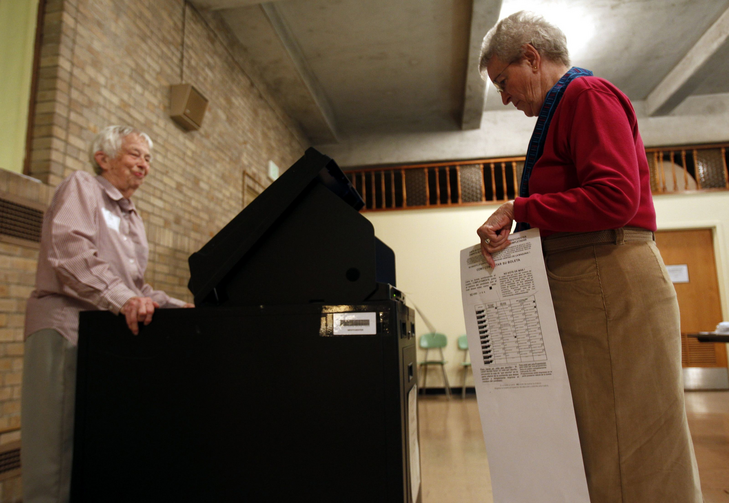 Is there a Catholic vote?

Voting patterns show Catholics vote much like the rest of America, with minor swings one way or the other, depending on the candidate and the state.

Any way it's examined, analysts say the Catholic vote is not as monolithic as it once was.

That is, except for Latinos, who now comprise about 35 percent of U.S. Catholics: More than 65 percent regularly vote for Democrats, and about 20 percent vote Republican, leaving few to be swayed by the candidates' political positions.

"Even though people use the shorthand of 'the Catholic vote,' 'the vote of Catholics' is probably the better way to describe it because there is that diversity now," said Mark Gray, senior research associate at the Washington-based Center for Applied Research in the Apostolate.

Gray suggested that the elections of 1960 and 1964 were the last where Catholics could be considered a uniform voting bloc. In 1960, they were moved to support Democrat John F. Kennedy, the country's first and only Catholic president, and that wave carried into the election four years later.

But since then, Gray told Catholic News Service, Catholics "have not been really in one camp or the other," and that they hold values similar to the rest of the voting populace, an indication that church teaching holds little sway in the election at the polls.

"[Catholics] look for teachings of the church that are consistent with the party affiliation that they have," Gray said.

Monika L. McDermott, associate professor of political science at Fordham University, who has analyzed exit poll data for national news organizations, echoed Gray, saying the diversity among Catholics means they vote the way they want no matter what the Catholic Church teaches.

So there's no need to expect that Catholics by themselves will sway the eventual outcome of this year's presidential election, with its strange twists as candidates trade extraordinarily nasty barbs and accuse major party leadership of a lack of transparency in the delegate selection process.

Factors such as anger and distrust among voters are fueling the rise of self-proclaimed "outsiders" whose message has appealed to those who have felt betrayed by the institutions of government, church and social services that they once trusted to work on their behalf.

Stephen F. Schneck, director of the Institute for Policy Research & Catholic Studies at The Catholic University of America, said perhaps no other group has felt more betrayed than white working class communities in places such as Pennsylvania, Appalachia, the Ozarks and the Deep South.

In an address during a daylong symposium, "Rebuilding Trust," April 14 at the university, Schneck described the high levels of drug abuse and alcoholism, marriage failures, declining life expectancy and rising crime rates that plague such communities.

"There are many angles from which to consider the correlation between decaying social capital and what's happening to the quality of life for these populations, but one way to see it is as a crisis of trust," Schneck told the audience.

"It's a breakdown of trust with even basic institutions of social life. Their distrust of government is something we all hear about, but it goes far beyond that," he said.

A week later in an interview, Schneck said working-class whites feel "like they've lived up to their end of the bargain, but the other institutions have not," so they are turning to candidates who seem to offer them a better life.

Matthew Green, assistant professor of political scientist at The Catholic University of America and another symposium speaker, said that could explain the appeal of Republican billionaire Donald Trump and, to a lesser extent, avowed democratic socialist Bernie Sanders -- candidates who have positioned themselves as outside the political mainstream.

"If you distrust the institution, but there is a candidate who says 'I'm going to fix things,' then that might motivate you to vote," Green told CNS.

Even with the large turnout among working class white voters, Latinos may hold the key to the general election. If they show up at the polls in places like Florida, Nevada and Colorado, they will influence who becomes the next occupant of the White House, said Luis Fraga, co-director of the Institute for Latino Studies and professor of political science at the University of Notre Dame.

He offered a few statistics that are expected to influence election outcomes beginning this year, but especially in the future:

• 63 percent of Latinos in the U.S. were born in the U.S. and another 15 percent are naturalized citizens

"If I wanted to register new Latino voters, that's where you tend to focus, it would be 17-year-olds. You have a huge group that has the possibility of engaging (politically)," he said.

Fraga pointed to Florida, with its rapid growth in newcomers from Puerto Rico, with large numbers of young and educated people seeking opportunities that are unavailable on the Caribbean island territory. Fraga said the number of Florida residents of Cuban origin, who tend to vote Republican, remains flat and, because both trends are expected to continue, the political landscape in Florida will change.

However Catholics vote, the U.S. Conference of Catholic Bishops again is preparing dissemination of its quadrennial document "Forming Consciences for Faithful Citizenship" and accompanying study guides, bulletin inserts and other discussion materials.

The latest iteration of the document, approved at the bishops' annual fall meeting in November, draws on papal teaching since 2007, particularly the latter part of Pope Benedict XVI's tenure and Pope Francis' three years overseeing the Vatican. It also considers recent developments in U.S. domestic and foreign policy related to same-sex marriage, the use of drones in warfare and care for the environment, among other issues.

"There's no doubt that this is something that's very important to bring to the attention of Catholics, and formation of conscience, as the document says, is a lifelong undertaking, and our need to bring our faith to the public square is also not about one election," said Susan Sullivan, director of education and outreach in the U.S.C.C.B. Department of Justice, Peace and Human Development .

Materials are expected to be ready in the next several weeks, giving parishes, schools and study groups ample time to consider what the document offers prior to Election Day Nov. 8.