How Much Corporate Influence Is Too Much?: Faith community looks at money, power and public policy 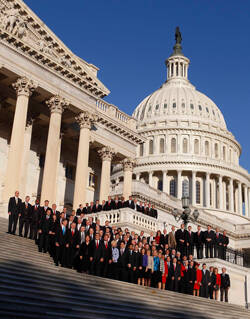 Corporate influence, through money and lobbying, is a given in setting public policy.

But faith leaders and public interest groups are wondering how much corporate influence is too much.

Organizations such as the Franciscan Action Network and Common Cause have banded together to organize around the issue. Their message: Unlimited political spending by corporations undermines democracy.

For Patrick Carolan, the network's executive director, it's a moral and religious issue that deserves the attention of people of faith. He told Catholic News Service that unlimited spending mutes the voices of the poor and marginalized in favor of those with the largest bankroll.

He outlined the organization's concerns in opening a conference on Oct. 1 sponsored by the Franciscan Action Network and the Institute for Policy Research & Catholic Studies at The Catholic University of America.

"As faith leaders we care because we are all intimately connected with the troubles people face daily," Carolan said. "Faith leaders experience firsthand the results unlimited money in politics has on almost every issue. No matter what issue we work on, issues like immigration reform, climate change, gun safety, one of the things we've discovered is every one of those issues is connected to money one way or another."

Through a coalition called Faithful Democracy, the Franciscan network also has worked with organizations such as Public Citizen, Common Cause and American Friends Service Committee to confront corporate spending practices in the political arena.

The grass-roots campaign stems from two U.S. Supreme Court decisions that lifted limits on campaign spending. In Citizens United vs. Federal Election Commission in 2010, a 5-4 court majority held that the First Amendment prohibits the government from restricting political spending by unions and corporations. In McCutcheon vs. Federal Election Commission, the court in another 5-4 decision last April struck down overall campaign spending limits to candidates, political parties and political action committees for individual donors.

Organizations such as the U.S. Chamber of Commerce and Americans for Prosperity have defended their political spending practices as necessary to limit growing government, reduce taxes and promote free-market economics.

The issue of growing corporate power and influence has reached as far as the Vatican. Pope Francis has said that the ideology of money has become a new golden calf. He has challenged people to find ways to use political power, influence and financial resources to aid poor people.

Auburn Theological Seminary in New York published a theological critique of the role of money in American politics: "Losing Faith in Our Democracy," written by Rabbi Justus Baird, the school's dean. It concluded that a "multiplicity of voices," particularly that of poor people, is needed to preserve democracy.

Rabbi Baird drew from Catholic social teaching and traditional Jewish teaching from the Old Testament in explaining the critique's conclusions at the Catholic University conference. He encouraged participants to find religious language to frame arguments to "move people to connect the dots" signifying corporate spending.

Stephen Schneck, director of the Institute for Policy Research & Catholic Studies, told CNS the common good is threatened when political debates and policymaking is dominated by a few voices who are able to shape outcomes to their liking and to the detriment of society.

"For us Catholics, politics is supposed to be about promotion of the common good, so we engage the citizens in political life for the common good of the whole community. There's no way to think about money but to recognize that money is directly counter to that. It's about the representation of special interest in politics. It's about private interest, not the common good," Schneck said during a conference break.

The conference also addressed several strategies underway to reduce corporate influence. The 50 attendees heard discussions about a pending constitutional amendment that would remove the personhood designation of corporations stemming from the Citizens United case to regular preaching on the issue.

The constitutional amendment has been introduced in both the Senate and the House as Joint Resolution 119. It needs a two-thirds majority in both chambers to pass. Congressional observers rate prospects for passage in both chambers as slim.

Despite the uphill battle, representatives of the public interest groups said that a groundswell of support for the amendment could sway Congress to approve it. The amendment would then have to be ratified by 38 state legislatures before it would become part of the Constitution.

The extent of corporate spending in politics prompted conference participants to begin thinking of ways to raise greater awareness of the issue.

Eli McCarthy, director for justice and peace at the Conference of Major Superiors of Men, said that progress on the issues he has worked on -- gun violence, immigration reform, Middle East peace, restorative justice for prison inmates -- seemed to be stymied by corporate money.

"It's about connecting the dots," he said, echoing Rabbi Baird. "It raised the question for me about including the voices for the poor and making sure we don't put a Band-Aid on something without really getting to the structural dilemma of the poor being marginalized in so many ways."

Franciscan Father Jim Gardiner, a member of the Franciscan Action Network's board of directors, said the workshop served as a reminder that the Gospel is connected to many issues and that he hoped to work some of what he learned into homilies at Masses at the Franciscan Monastery in Washington.

"There's a greater variety of issues we need to be able to talk about," he said. "It's Gospel driven. Some people would say it is too specific (to address), but I don't think it is."

Dennis Sadowski - Catholic News Service
Show Comments (
2
)
Comments are automatically closed two weeks after an article's initial publication. See our comments policy for more.
Lawrence Lyons
7 years ago
Not about a doubtit!!!
G B
7 years ago
The idea of amending the 1st Amendment is scary. Religious leaders want to give the same government that wants to force The Little Sisters of the Poor to supply contraception to its workers cannot be trusted to protect our right to freedom of speech. The same government that is quickly forcing guy marriage on this country cannot be trusted to protect our freedom of speech. The same government that joyfully allows for abortions cannot be trusted to protect our freedom of speech. Giving the federal government more power, making it even larger, is no way to protect our individual rights. Freedom of speech is our right as citizens. Corporations, like NBC and others have the right to have their voice heard, even when we disagree with their lousy ideas. If the churches want their force heard louder, then maybe they need to do a better job of communicating with parishioners to give money to have our voices heard too. Get the churches out there proclaiming the good news. We have freedom of speech too. Use it. P. S. What is "the common good"?