Holy Spirits: Encounters with a drinking culture in college 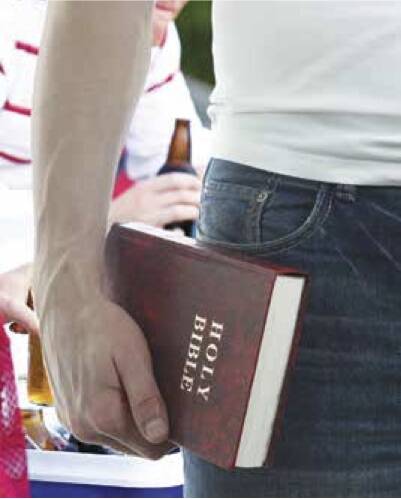 I first began to deepen my relationship with God in high school. I attended a small, Catholic, all-boys school sponsored by the Congregation of the Brothers of St. Francis Xavier. As a result, I was always presented with opportunities that encouraged me to explore my faith and reflect on what presence God had in my life.

I was enrolled in religion courses, which were required each year, but I longed for a way to focus on the deeper spiritual aspects of the faith and to learn more about the theology behind my Catholic beliefs. Each week, during my free period, I visited the school librarian, who helped me grow in my faith by answering some of these questions. We would discuss topics like the perpetual virginity of Mary, the concept of time in relation to purgatory and what indulgences were. These conversations helped spark my interest in developing a deeper relationship with God.

Another aspect of my high school experience that encouraged me to reflect and pray about who God was to me were the various required and optional retreats. These opportunities helped me to truly strengthen my relationship with God and in the process learn more about myself. The growth and increased understanding that I found on the retreats and other experiences that my school’s campus ministry department offered inspired me to become a peer minister during my senior year, in the hope of helping other students achieve the same spiritual growth through their own retreat experiences.

When I got to college, things were different. I wasn’t interested in drinking, but it seemed everyone else was. During the first couple of weekends, when other students decided to “go out,” I usually would hang out with a small group of people who chose to engage in dry activities. But as the weeks went on, this group grew smaller and smaller. It seemed that for most people, the question was not “Should I drink?” but rather, “Should I get drunk?” This drinking culture, in which many of my peers seemed to disregard their own well-being, came as a shock to me.

After a few weekends spent alone in my room, watching a movie or getting some homework done, I began to wonder if maybe I was the one who was not acting “normal” and why I never had the desire to get drunk on the weekends. I asked some of my friends why they drank to excess, and while some just said they enjoyed it, many responded that they were drinking to forget something or to relieve stress. They described trying to avoid or escape some part of themselves.

These responses didn’t clear up my confusion. I didn’t know what to make of the fact that so many of my friends shared the same morals and values as me but also were engaged in this culture. I decided to get someone else’s opinion on the matter. That was when I met with one of the Jesuits who lived at the university. He helped me to understand that, while my peers and I were experiencing the stress that comes with college life, we were dealing with it differently.

Deepening my relationship with God in high school had helped me to turn to God when I experienced rough times and to find consolation in the friendship I had with God. I felt gratitude that I had developed relationships with others, whom I felt comfortable going to when a problem became too big for me to handle alone. And I also felt comfortable talking with God about anything that bothered me.

I also understood that I couldn’t let my relationship with God grow stagnant. In an effort to grow this relationship, I sought out my university’s campus ministry department. In my first semester, I became a eucharistic minister, attended several retreats, went to adoration once a week and attended some of the Masses offered on weeknights in the residence halls.

The most significant part of engaging in these different activities was meeting new people who either did not engage in the drinking culture, or drank responsibly and were of age. Meeting people who actually shared my interests—both socially and spiritually—was very encouraging, and it brought me joy to be in their company. It was a comfort to know that these friends would not suggest that we go to a party where people would be drinking, or that they would respect the fact that I didn’t want to drink. Despite the fact I was a freshman and many members of this group were upperclassmen, I always felt welcome. They invited me to spend time with them, and it was always easy to strike up a conversation if I ran into one of them. These people, especially those in the eucharistic minister community, helped me with my transition to life in college and became mentors and role models for how I could have fun and get the most out of my college experience without drinking.

Through participating in my campus ministry and strengthening the relationship I made with the other members of this community, I continued to develop my relationship with God, too—something that brought me profound joy. In times of trouble, I knew I could turn to them rather than to alcohol, as some of my peers did. The friends I made also helped me to surround myself with a feeling of consolation. I felt encouraged to be myself and live my faith, despite the challenge that the culture of drinking posed. Little did I know that by opening myself up to new—and now cherished—relationships with others, I was once again accepting God’s invitation to know him better, and to grow in that relationship, too.

Carlos Mesquita is a sophomore at Fairfield University, Fairfield, Conn.

Show Comments (
1
)
Comments are automatically closed two weeks after an article's initial publication. See our comments policy for more.
Brenda Becker
7 years 11 months ago
A modestly written piece with a bombshell takeaway: The "drinking culture" (and, I'd posit, its closely bound phenom the "hookup culture") are the products of crushing spiritual emptiness, not youthful high spirits. This young man in under 1,000 words lays out the simple, powerful steps our young people need so desperately for spiritual safety and maturity: community, catechesis, and role models. Oh, and the Eucharist is in there, too. Now for a related, and critically needed, exploration of how our young women are drinking themselves unconscious to convince themselves that, as good college feminists, they actually enjoy the degradation of casual sex without love or commitment.