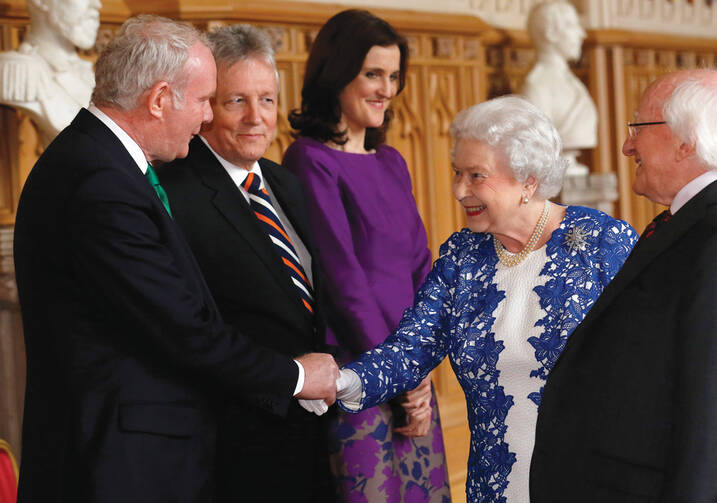 State visits are usually occasions of pomp and circumstance signifying little. That was not true, however, of the recent formal introduction of President Michael Higgins of Ireland to Queen Elizabeth II of the United Kingdom. During the president’s historic four-day visit, from April 8 to 12, the British Union Jack was hoisted alongside the Irish tricolor in courtesy calls around England, and the Irish president was feted at two banquets hosted by the queen at Windsor Castle. Higgins addressed both Houses of Parliament.

Before returning to Dublin, Higgins said he had been moved by the reception he received during this first-ever state reception of an Irish president in the United Kingdom and urged those who were unhappy with the visit on both sides of the Irish Sea to “think of all the things we have in common.”

“A president of Ireland on a state visit to the U.K. would have been unthinkable even two decades ago,” said Christopher Maginn, associate professor of history with the Institute for Irish Studies at Fordham University in New York. “It is of immense significance in the Anglo-Irish relationship,” Maginn wrote in an email. “But it is even more than that. It would appear that Queen Elizabeth herself is the primary diplomatic mover here. The fact that she hosted the president not at Buckingham Palace, her place of business, but at her home, Windsor Castle, reflects her interest in improving the relationship with Ireland.”

According to Maginn, the queen, aware of the long and troubled history between England and Ireland and the role of the monarchy in it—“also aware of her own mortality”—is using the symbolic might of her monarchy “to right a historical wrong” that will “allow the two governments of Britain and Ireland to reap the rewards.”

Maginn adds that Higgins, in the mostly ceremonial role of Irish president, makes a good partner in such an effort. A former academic, a poet and author and a dramatic public speaker, he is not aligned with either of Ireland’s main nationalist parties.

The rewards of this unprecedented exchange of state visits—the queen made a historic visit to Ireland in 2011—are twofold, according to Maginn: “normalization in the North and economic growth” for both nations.

“With such good relations between Dublin and London, the political parties in Northern Ireland only have themselves to blame for continued political impasse,” Maginn said. “Loyalist intransigence and hatred of Dublin among Protestants rings hollow if the queen is wining and dining the president of Ireland; nationalist intransigence rings hollow when a former commander of the I.R.A.—Martin McGuinness—is shaking hands with the queen.”

Better relations between Dublin and London can only help economic conditions in Ireland, according to Maginn. “U.K. nationals are the largest minority here in Ireland and U.K. tourists are the largest visiting group. On the other side of this, Britain continues to be a destination of thousands of Irish people—many of them now highly educated—for work.”

During his tour, Higgins met Prime Minister David Cameron at Downing Street and Deputy Prime Minister Nick Clegg at Buckingham Palace. He told his British hosts: “It is the business of living souls to breathe life into words, and I have no doubt but that our long conversation in a shared language will continue into the far future to breathe new life, and the lightning of our different imaginations, into a common human purpose.”

Regarding what improved relations bode for the future of Northern Ireland and the possibility of a united Ireland, Maginn said, “With the future of the single currency uncertain and with Scotland threatening to vote for independence next year, a situation could theoretically arise where a united Ireland emerges within some new British economic union.

“Really though, the people of Ireland have moved beyond talk of a united Ireland. It is no longer, if it ever was, a priority in the Republic and census numbers in the North are showing increased ambivalence on the subject. Irish people are ready to move on and this visit, I think, reflects that.”