In Her Majesty's Service: ‘The Audience’ takes a closer look at Queen Elizabeth 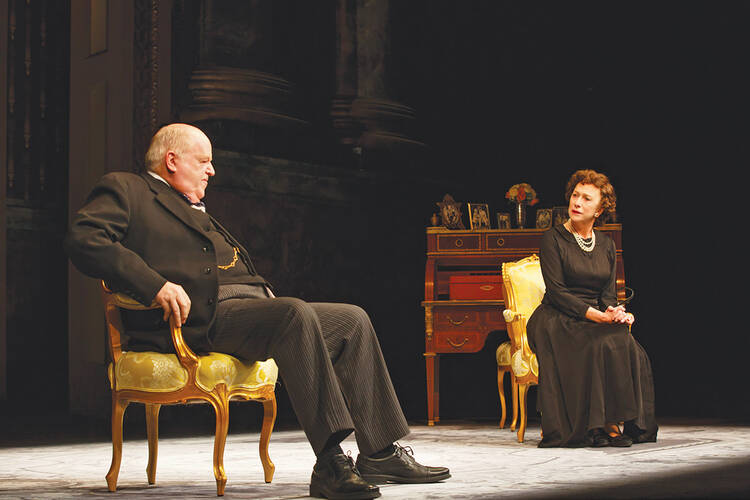 There’s no use denying that a certain vestigial Englishness is a persistent strand in our American DNA. This is not strictly a matter of colonial history—that our nation’s so-called founding fathers, to a man, began their lives as subjects of the Crown. It is more like an affectionate familial bond with an old relative from a half-remembered hometown; a fond recognition, from a comfortable distance, that we share with the United Kingdom something more than a language but less than a lineage.

That at least partly explains the ongoing American fascination with the British royal family, whom we enjoy as light tabloid entertainment, as if the Windsors were a quaint celebrity mill, the original famous-for-being-famous people—upmarket Kardashians. American Anglophilia is also to be credited (or blamed) for an entire prestige product line, from television series on PBS and BBC America to a steady stream of stage imports to Broadway, and lately to your local cineplex, thanks to a program by which London’s National Theater is now regularly filming and broadcasting its work in high-definition to movie theaters.

These two tendencies—our deference to royalty and our privileging of English theatuh—come together neatly in Peter Morgan’s well-made play The Audience, now in a stately, one could even say queenly production on Broadway with Helen Mirren as Elizabeth II. Though the play’s West End production was already broadcast to British and American cinemas in 2013, its fresh presence in the flesh affirms either the durable appeal of theater’s liveness amid all our screened distractions or an obeisance to box-office star power in the presence of Dame Helen. Or both. The attraction of seeing a famous actor live, like that of seeing a beloved rock band, seems in little danger of dimming thanks to DVD’s or livestreams.

Indeed, fame is both a prime subject and an intrinsic element of “The Audience,” directed with assurance by Stephen Daldry. Perhaps the most bewitching thing about Morgan’s play, which might otherwise be a stodgy slog, is the way Mirren’s and the queen’s very different kinds of fame reflect back and forth on each other, as in a hall of mirrors. The effect is both humanizing, since Mirren can’t help but bring shades of life and even mischief to the sovereign, whom she plays in her 20s through her present late 80s, as well as regalizing, if that’s a word. You come away with a sense of the woman’s stature, at least as Morgan conceives it—of the way that Elizabeth bestrides the world stage, albeit from a sidelong posture.

This large-as-life queen makes the politicians who promenade through her palace look small and craven by comparison, and that is also Morgan’s point. In an imaginative but informed effort of historical fiction, the playwright—whose previous credits include “Frost/Nixon” and the film “The Queen,” also with Mirren—has conjured the content of the weekly private audiences the queen has had with every British prime minister from Churchill to Cameron. He has had to imagine them because, anecdotes aside, there is no record of what the P.M.’s have said privately to the queen, or vice versa. Her Majesty’s role has only been advisory, but Morgan posits—persuasively, up to a point—that these briefings have not been a mere formality and that, if nothing else, the institutional memory the sovereign brings to bear is no small resource to the passing parade of elected officials.

Morgan’s sympathies become clear: He admires the queen’s noblesse-oblige attachment to the “personal union” of the Commonwealth of Nations, a mostly benign vestige of the British Empire, as a rose-colored counterweight to the stark bipolar geopolitics of the Cold War and its no less polarizing aftermath. He shares her evident distaste for militarism, drawing a broad-stroked but eerie parallel between the cases for war in the Middle East made by Anthony Eden during the Suez Crisis of 1956 and by Tony Blair in 2003.

The play’s brief, overly partisan portrait of Margaret Thatcher, played by Judith Ivey as a strained and strident caricature, represents something of a missed opportunity. For while Morgan and Mirren are in many ways quite savvy about the ways the queen’s gender informs her sense of being adjacent to political power without actually possessing it, Morgan doesn’t use this unique meeting of two female national leaders to complicate that picture, but instead as a chance to contrast the queen’s communitarian, keep-calm-and-carry-on Britain with the aggressive neoliberalism of the Thatcher/Blair era.

Purportedly the queen’s favorite P.M.’s were John Major, the shambolic, over-sharing successor to Thatcher, and Harold Wilson, the Labour stalwart who held sway through the swinging ’60s and a bit of the ’70s (in nonconsecutive terms). Portrayed with relish by Richard McCabe, Wilson first enters as an awkward Yorkshire hick with a Polaroid, alternately irreverent and overawed by Her Majesty, then grows into a mutually teasing royal pal and confidant. A fireside scene in Balmoral seals their comradeship. Social class may be the great British theme; but oddly enough, for all its alleged rigidity, it is also a kind of leveler—a shared in-joke between queen and commoner.

Morgan sketches in a few personal details, with a young girl playing the teenaged, pre-crowned Elizabeth, uncertain of her future though besotted from a young age with the Greek/Danish nobleman who would later be her Prince Philip. He grazes quickly past the Diana business, let alone the question of succession (the subject of a sensational new play in London, “King Charles III,” that is rumored to be eying a move to New York). But Morgan’s focus is squarely on the intersection of ceremony and statecraft represented by the seeming oxymoron of “constitutional monarchy,” and it is a marriage to which he appears to give his full blessing. If we Americans often exhibit a strange, selective nostalgia for a country we left behind centuries ago, can we begrudge its own subjects—even its ostensibly liberal ones—a little homegrown sentimentality about their own timeworn traditions?