Reminding bishops of a preferential option for the poor 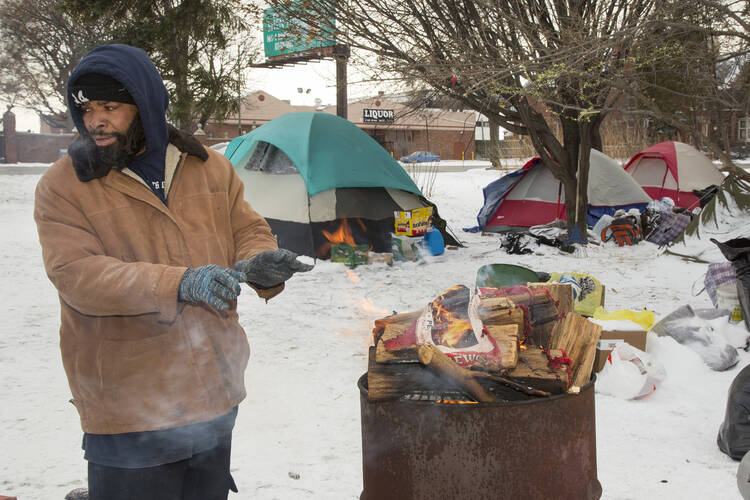 The U.S. bishops just passed their strategic plan for 2017-2020. It had been challenged for not including specific mention of the abolition of the death penalty and the bishops' long support of comprehensive immigration reform. Speaking in qualified support for the strategic plan, Helena, Mont., Bishop George L. Thomas made some interesting comments about the need to raise up poverty as an issue of concern to U.S. Catholics which I include in their entirety below:

At our June meeting in St. Louis, I expressed strong disappointment over the first draft we received from the Committee on Plans and Priorities. This was due in no small part to the absence of any meaningful reference to those who are trapped in a cycle of poverty, unemployment, and economic injustice, many of whom are parishioners in our respective dioceses.

I am grateful to the Committee on Priorities and Plans for your willingness to refine the working draft and to include in the new document many of the interventions voiced by the Bishops at the June 2015 meeting.

That you have referenced poverty not once but twice in the document represents a significant and positive shift in our plans and priorities. That you have placed the vast topic of poverty in the context of Catholic Social Teaching (CST) is even more significant, and cause for optimism and hope.

In doing so, you have made room to explore many new possibilities for the jobless, the working poor, and the invisible poor, often newly arriving immigrants, and the rural poor.

In using CST as the point of reference, I see several implications that merit future dialogue and exploration by the members of the Conference. While there are many,  I would like to name four assumptions about the approach you have taken:

(1) by invoking the principles of CST, we are opening up the possibility giving the poor and disenfranchised , along with the immigrant and refugee, a new place at the table, underscoring the fact that CST, properly understood gives the poor not just a place, but rather a preferential option, as we apportion our time and resources as a Conference;

(2) By invoking the principles of CST,  we have the possibility if not the obligation to exercise a more prophetic and courageous voice on behalf of the poor, and an opportunity to stand in solidarity with the poor as their advocates and friends, especially when decisions are made by p in corporate boardrooms, state legislatures, and in the halls of Congress--decisions which effect real people and real lives, for good or for ill;

(3) By invoking the principles of CST, we have the opportunity to actively and publicly support the Holy Father's invitation to dispel the globalization of indifference and replace it with a Culture of Care which he skillfully explored before the joint Session of Congress; this papal initiative challenges clergy, laity and religious alike to take up a common cause of transforming culture and society in the light of the Gospel.

(4) Finally, the Committee has made the advancement of healthy family life a central strategy for combating poverty. In doing so, we would do well first to seek the insights available both through social science and sound theological reflection, that we might to better understand and address, in the parlance of CST, the underlying causes of poverty, whether that be the breakdown of family, or the plethora of complex problems that have kept whole generations of people bound in hopelessness and need.

If these four assumptions are correct, I support the latest iteration of the committees work as "new and improved," a document worthy of our acceptance and collective support.