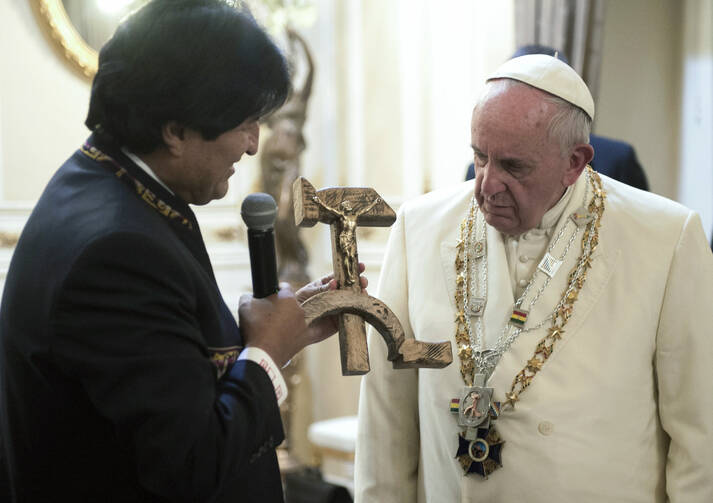 When Bolivian President Evo Morales gave Pope Francis a crucifix atop a hammer and sickle, eyebrows were raised, including the pope's.

But, as Morales explained, the cross was created by Jesuit Father Luis Espinal, who was assassinated in 1980 after being active in the country's pro-democracy movement.

The pope and president were surrounded with clicking cameras July 8 during the gift presentation in the government palace in La Paz.

At least one media outlet reported the pope saying, "That's not right," ("No esta bien eso") but several others said the pope, who was speaking Spanish, responded, "I didn't know that" ("Eso no lo sabia") when Morales explained the cross was based on a design by Father Espinal.

Father Lombardi, who said neither he nor the Jesuit pope had ever seen or heard of Father Espinal's crucifix, said he believes it is much more likely that the pope admitted to not knowing its origin than to saying it was wrong.

After discussing the cross with several Jesuits July 9, Father Lombardi said that Father Espinal, who "was an artist, very creative," made the crucifix as an expression of his belief in the need for dialogue involving all Bolivians at a time of great political tension and upheaval.

For Father Espinal "it was not ideological," Father Lombardi said; he was not giving "a Marxist interpretation of the faith."

How other people interpret the piece or use it today is another question, the spokesman said.

"Certainly, though, it will not be put in a church," he said.

The crucifix, he added, was "an expression of what Father Espinal was living" at the time he made it.

Asked his personal reaction to the piece, Father Lombardi said he tried to understand the origin of the piece and what Father Espinal intended when he made it.

Cindy Wooden - Catholic News Service
@Cindy_Wooden
Show Comments (
1
)
Comments are automatically closed two weeks after an article's initial publication. See our comments policy for more.
Vincent Gaitley
6 years 5 months ago
This abomination matches the Andres Serrano "Piss Christ" in which a crucifix was displayed in a jar of urine. And what would the pope say to someone who offered him Christ mounted on swastika? The notorious symbol of the vicious communist regimes world wide offend every Christian of goodwill. More people were murdered by the Marxists/Leninists/Stalinists governments than by cruel right wing dictators. And those that lived were subjected to political slavery and other oppressions. If this pope thinks that accepting this evil totem is okay and only a token of the struggle of the poor, then he is incompetent and naive. Communism never helped the poor, ever. Liberation theology is a disgrace that will only perpetuate suffering and poverty and pass it off as a sacrifice. God help us all if the pope is truly, slowly embracing these socialist falsehoods. My Jesuit education taught me to reject these "isms". I hope the pope does too.