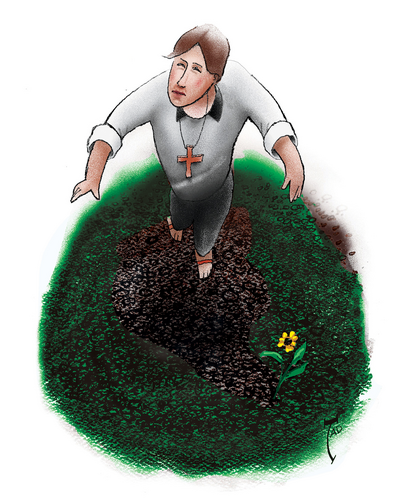 I have stopped trying to correct people when they tell me that Pope Francis is “so much more like Jesus” than his predecessor. Every institution has a public image and, fairly or not, for the first time in a long time the whole world sees a man of the people at the church’s rudder. I admire Francis and consider him saintly. But I am also convinced that the previous man to wear the white and gold, Pope Emeritus Benedict XVI, is saintly as well. I have found few sympathizers, however, even after I explain how Joseph Ratzinger’s compelling portrait of Christ helped lead me into the seminary.

I offer these reflections as a seminarian with no expertise (or interest) in ecclesiastical politics. But I studied at a secular university while working in a small-town pizzeria, so I have witnessed firsthand how ordinary non-Catholics are rebuffed by the authoritarian spirit they sense in the church. Whether these perceptions are accurate is irrelevant. If people say they are not being nourished by the church’s message, if they feel they are encountering “small-minded rules” instead of Christ, there very well may be something wrong with the way our message is being presented.

Pope Francis’ shift of focus toward “the mystery of the human being” is a bold restatement of what draws me—and many others—toward the ordained service of God’s people. It is radical and pastoral and turns the doctrinaire view of Christianity on its head. Instead of reiterating the usual formulas that define right thinking and living, the pope is moving us back toward the church’s raison d’être: to initiate and sustain personal encounters with Jesus Christ. “The proclamation of the saving love of God comes before moral and religious imperatives,” the pope said in an interview published in America and other Jesuit journals (9/30/13).

In other words, we must place Jesus before everything if the world is to hear anything we say. Culture wars—and liturgical wars and theological differences among believers—be damned. The pope is directing us to preach the saving message of Jesus to individuals, into all the filth and stress of real human lives, which is how it was meant to be preached.

One of my brother seminarians proposes that our culture is in a fog. The Christian frame of reference has disappeared from both public and private life; our society is post-Christian in belief and pre-Christian in morality. In an environment like this, we cannot afford to be afraid of interacting with heterodoxy. Theological hairsplitting is necessary in seminary formation, but it has little relevance for the average nonbeliever (or, frankly, the average believer). We must be willing to get our hands dirty and meet people precisely as free and thinking persons in order to take their beliefs and concerns seriously.

This approach does not mean making fluid the boundaries between orthodoxy and heresy; Francis himself has said that priests must know “how to dialogue and to descend into their people’s night, into the darkness, but without getting lost” (emphasis added). But we cannot hope to accompany our people unless we are willing to run to the very edge of orthodoxy, straddle it and immerse ourselves in the fog that covers their eyes.

What matters most is that we claim to have a truth that is meant to illuminate the life of each and every person we encounter. If all we offer is a plethora of abstractions—“a disjointed multitude of doctrines to be imposed insistently,” in the words of Francis—they will find our message irrelevant to their concerns. Rather, we are being called by our new pope to bring the simplicity and profundity of Jesus’ message directly to people. It is a streamlined, missionary approach. A society that is free to accept any number of teachings does not perceive hope in a seemingly arbitrary set of guidelines. Instead, the church’s ministers, and especially its future ministers, must keep in mind that they are to proclaim always “the freshness and fragrance of the Gospel.”

It was Pope Benedict XVI who insisted in “Verbum Domini” (2010), the post-synodal exhortation on the word of God, that the church’s highest task is “to enable the people of our time once more to encounter God, the God who speaks to us and shares his love so that we might have life in abundance.” Pope Francis seems to be taking this charge seriously. He is not changing dogma, as some fear, but rather is urging those charged with preaching the Gospel to strip it down to the essentials for greater potency. His vision of the church as “a field hospital after battle” is particularly constructive: we, as the body of Christ, exist solely to help heal the wounds and existential weariness of a world that does not know God.

Francis is calling the church to concentrate everything on this mission. “You have to heal [the person’s] wounds,” he said. “Then we can talk about everything else. Heal the wounds, heal the wounds.... And you have to start from the ground up.”

Alexander Turpin, a seminarian of the Diocese of Rockville Centre, N.Y., is a student at the Cathedral Seminary House of Formation in Douglaston, N.Y.

Show Comments (
1
)
Comments are automatically closed two weeks after an article's initial publication. See our comments policy for more.
Chere Labbe Doiron
5 years 4 months ago
Something so simple, complicated through dogma. If it no longer serves the needs of those dying spiritually, no wonder we seek Christ in other places. In Christ, there is no necessity for fear to be fostered and grace to be dosed out through dogma to those who behave, and those who don't quite fit to be "loved" but excluded. I participate, knowing full well that I am a sinner of the greatest degree, by refusing to be excluded. I refuse to be lukewarm in the beliefs that my experiences have proved to be grace-filled. The least of us speak a large god-filled truth that must be acted upon in faith.