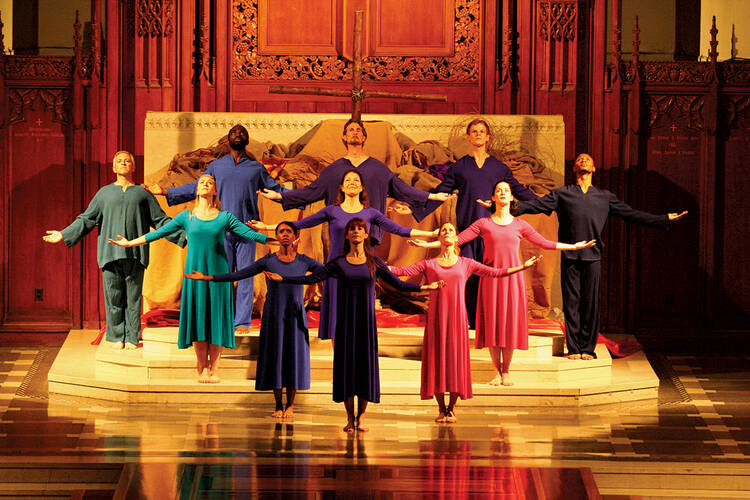 When I entered the Jesuits in 1966 at the age of 18, I could never have imagined that I would spend a great deal of my ministry as a choreographer and teacher of dance. Although I had always loved to dance and to create dances, I had not had an opportunity to study dance formally. It would never have crossed my mind that it would be the Society of Jesus that would give me the opportunity to use this hidden talent for the greater glory of God.

I was fortunate to enter the novitiate at a time when Jesuits in the United States were rediscovering the tradition in the arts that preceded the suppression of the Society of Jesus in the 1770s. From the earliest years of the Society, there had been Jesuit musicians, composers, visual artists, architects and patrons of the art of dance.

Dance played an important role in Jesuit schools in the 17th and early 18th centuries. Dancing masters taught in Jesuit schools, and Jesuits themselves wrote treatises on dance. Claude-François Ménestrier, S.J. (1631-1705), who is considered the first ballet historian, published his treatise on dance at Paris in 1682. Judith Rock, a contemporary dance historian who has restaged some of these Jesuit Baroque ballets, describes in detail the philosophy and rationale that prompted Jesuits like Ménestrier to use dance as a pedagogical tool in her work, Terpsichore at Louis-le-Grand:

At Louis-le-Grand, the Jesuit collège on the rue Saint Jacques in Paris, the ballets began as intermèdes for the school’s Latin tragedies. These were lighter intervals of dancing, singing, speaking and instruments in between the acts of the somber drama.

In a commentary on the rationale behind these ballets, Rock writes:

The Jesuits made ballets because they cared about art and communication, and communication meant body as much as it meant words. The Jesuits ran schools for boys and taught them rhetoric. Rhetoric was the art of public communication with body and voice. Performing in ballets gave the Jesuits’ students strong, eloquent bodies and trained them to dance well at court and everywhere else.

As a young Jesuit, I knew none of this. My “aha” moment came at the Jesuit Institute for the Arts at the University of Santa Clara in 1971, where I was able to participate in a ballet class for Jesuits. It was as if I had waited 22 years to find my life’s passion. Thanks to the openness of some of my superiors, I was able to make up for lost time and study dance throughout my course of studies and Jesuit formation.

One of the most important aspects of my study of dance, however, was that I immediately recognized its power to express the religious dimension of human life. Dance had its origins in the sacred, and there is a connection between the symbolic language of prayer and worship and that of dance. The psalmist’s invitation to “praise the Lord in the festive dance” would become a mantra for me as I began to explore how the art and craft of dance could give shape and form to religious experience.

Over the past 40 years I have had the chance to work with professional dancers from major dance companies, with ordinary folks who love to dance and with whole assemblies of worshippers willing to engage in simple movement and gesture as part of their communal prayer. I have used both the stage and the sanctuary as sites for my artistic and faith expression.

As Jesuit artist-in-residence at Boston College for more than 35 years and as pastor of St. Ignatius Church for more than 25 years, I have been able to create pieces for holidays and worship services. One of the works that I choreographed and staged and that has special significance to me as a Jesuit is “For the Greater Glory of God,” a dance/theater piece inspired by the Spiritual Exercises of St. Ignatius.

I created this work in 1990 for the 450th anniversary of the founding of the Society of Jesus and the 500th anniversary of the birth of St. Ignatius. Since that time, a company of musicians, dancers and actors has performed this piece in many Jesuit universities, parishes and retreat centers.

In “For the Greater Glory of God,” I play the role of St. Ignatius “giving” the Spiritual Exercises. Using the basic structure of the exercises—the “Principle and Foundation,” four “weeks,” or parts, and a final contemplation on attaining God’s love—I wove together music, dances and Scripture texts that would bring the exercises to life through artistic imagination. For those who know the exercises, imagination is a key to St. Ignatius’ genius of inviting people into an intimate relationship with God. Although this exercise of the imagination would happen in the prayer of the person making the Spiritual Exercises, I wanted to use the exercise of the artistic imagination to help others to “see” and “feel” the exercises through the power of music and dance.

The Spiritual Exercises begin with the “Principle and Foundation,” in which Ignatius writes, “the human person is created to praise, reverence and serve God our Lord and by this means to save one’s soul.” And so I begin “For the Greater Glory of God” with the “Song of Praise” from Paul Winter’s “Missa Gaia.” The choreography uses movement that embodies an expression of praise; it has gestures that fluctuate between reaching up and outward and contracting inward, giving a feel for the created person’s relationship of reverence toward the Creator. This same theme comes to life in Arvo Pärt’s “Te Deum,” which uses prostration, stretching and collapsing, trembling gestures and finally an explosion of leaps and turns to express the awesome relationship with the Creator.

In the Second Week, or second period, of the Spiritual Exercises, the retreatant is invited into a relationship with Jesus, asking for the grace to know, love and serve him. One of the pieces of choreography that I use to give flesh and blood to this intimate relationship is danced to Paul Melley’s “I Am.” In this piece, those who follow Jesus move through Jesus the Gate, dance with Jesus the Vine, join with Jesus the Light and are comforted and cradled by Jesus the Good Shepherd. Dance has an extraordinary power to visualize and express one’s inner life. In this context the dances express outwardly what is experienced inwardly in prayer.

I recently had the chance to view this performance in a new way. Jeremy Zipple, S.J., executive editor of America Films, filmed a performance of this work. Through his work I could see the movement and expressions of the piece from many different perspectives. It uses multiple cameras and angles, including using a drone camera that made it possible to watch the performance from above. It is as if he has created a new sort of “choreography.” The dances are familiar to me, but through this video I am seeing them in a new way. This is in fact what happens to each person making the Spiritual Exercises. The framework of the exercises is always the same, but the prayer of the individual and the work of the Spirit enable him or her to experience them in unique ways.

Robert VerEecke, S.J., is pastor of St. Ignatius of Loyola parish in Chestnut Hill, Mass., and the Jesuit artist-in-residence at Boston College. Learn more about his work at www.blde.org.

Show Comments (
2
)
Comments are automatically closed two weeks after an article's initial publication. See our comments policy for more.
Larry Ehren
7 years 5 months ago
Bob and I were classmates in Theology. I can recall his practice sessions in his room while I was studying, his use of dance to express things in Jesuit community life, his gathering of student dancers for our Weston Scool ofTheology liturgies. Our paths have crossed several times over the years. He and others have redefined "Spiritual Exercises". Dance on! Boston College is fortunate to have you.
Sara Damewood
7 years 5 months ago
I love this. So good to see this art form revived!