Godfriends: when your godchild happens to be an adult 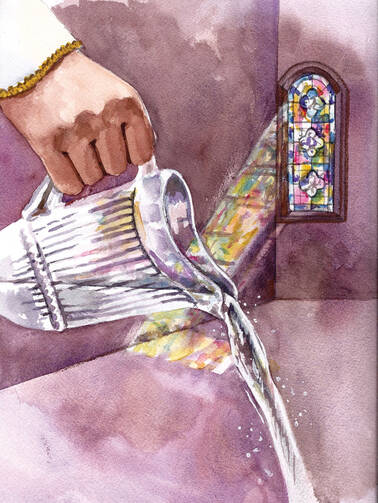 My godfather grew up with my father in Oakland, Calif., a black man and a white man coming of age together in the 1940s and ’50s, when that might have been unusual in other parts of the country. It seemed normal enough in the Bay Area. They had stayed in touch as my parents raised us, worked and worked some more.

My godfather spent his career in the United Nations overseeing refugee evacuations around the world. He married and had two daughters, and in his retirement settled into Murray Hill in Manhattan, just a few blocks from the United Nations.

As a child I was awed by his intellectual glamour. He wore dashikis and talked in a beautifully deep voice with an accent landing somewhere between Europe, the United States and the Middle East. He spoke and wrote fluently in many languages. He was, for lack of a better term, godlike.

I am still in touch with him. He writes, he calls, he travels abroad and zips around Manhattan on buses and subways. When I make it to town he takes me to his regular spot, a tiny French restaurant on the Lower East Side where they call him “Bob.” I call him Parrain, a nickname left over from my years of French studies, one of the many languages he speaks.

He was raised Catholic, and he’s fascinated by the good and bad machinations of the Vatican, the backstage stories of cardinals, bishops and popes, but I honestly don’t know if he attends church. He reveres the French writer Montaigne, a Renaissance Catholic who invented the personal essay but had a complex relationship with God. My godfather is, perhaps, a kind of Catholic humanist, deeply concerned with the suffering in the world and devoted to lessening it. He was drawn to the church for its history and traditions, but open-eyed about its shortcomings. My father was much the same in his life of faith. With those two as my primary spiritual guides, it is no wonder the most comfortable place I occupy in Catholicism is on its margins, oftentimes more of an observer than a participant. I move restlessly from parish to parish, always finding fault with one thing or another; I mentally tune out during shallow homilies and have been known to walk out on truly bad ones, and have to resist the urge to start mumbling footnotes to the readings.

So it is perhaps unsurprising that I did not become a godparent myself until this Easter, at the age of 45. My friends with children are, for the most part, neither Catholic nor Christian. The most recent baby-related event I attended was a ritual for the child of two friends, one of whom is a convert to Hinduism, the other an atheist with Jewish roots. The child was blessed, but not in Christian language or terms. In a side room of their apartment, the family dog pacing outside in the living room, grandparents, aunts and friends sat in a circle on the floor, held up the child and passed him around. He was raised up in this sense by a community, but not one bound by creeds or customs. A friend of the mother did recite a Hindu blessing from memory, but the father talked about the mythologies of comic books. And that, in many ways, is the ritual of my generation: a mishmash of traditions, a D.I.Y. version of faith.

On the night of the Easter Vigil, however, rituals and traditions that go back thousands of years swept over me and my new godchild as she stepped into the baptismal font. My goddaughter is only a few years younger than me, a mother of two teenagers, a woman with a career and friends and rituals of her own. Like many adult converts of our generation, her entry into Catholicism required years of discerning, exploring, questioning, rationalizing the irrational and committing to the inexplicable. I was there for part of that journey, and eventually we became good friends.

What I do not feel like is her mother. Not only would this be biologically implausible, but my role as her spiritual guide will always be one of mutual support rather than parental guidance or discipline. The tradition of godparents stretches back to the earliest days of the church, when parents themselves filled this role. As the church evolved, so did the role of the godparent. A Mexican-American friend told me that her child’s godparent plays both a spiritual and pragmatic supporting role: guiding her through catechesis, chipping in to pay for school, lending a hand with child care. But most people I asked about being godparents had casual roles in the lives of their godchildren: birthday cards, occasional meals, Facebook greetings. For the most part they felt slightly guilty about that, as if they had somehow failed.

When my friend started attending activities that were part of the Rite of Christian Initiation of Adults and I offered to be her sponsor, the fact that she wasn’t baptized meant I was also going to be her godparent. But I was given no sheet of responsibilities, no list to tick off. In Spanish, the term for godparent is padrino or madrina—literally, a co-parent. In many parts of the world, particularly outside of the West, there are closer bonds between godparents, parents and godchildren. The role of padrinos and madrinas in the lives of godchildren can make perfect sense in non-Western culture. Here in the United States, in our complex, multicultural church, the “rules” for godparents are, at best, unclear. We are technically spiritual parents who guide godchildren and are responsible for their care should something happen to their parents. What is unclear is how that role works when your godchild is a fully formed adult.

What we can be, instead, are companions. I often go to Mass with my goddaughter. During her formation program, I sat next to her in a tiny, airless, overheated room—months and months on metal folding chairs. We go out for meals, email, text, do the social media thing. I warned her I was probably a bad choice for a godparent: not very maternal, a habit of praying for 30 seconds before boredom or ennui sets in, impious and skeptical. On her behalf I was skeptical about the church’s ability, with its resources strained to the limit, to give her something substantial, to keep her engaged. She said all of that was fine. We became friends because of a mutual interest in God. We are Godfriends.

I wonder if my parents looked at my godfather all those years ago and thought, “He’s an intellectual, he’s critical, he lives abroad and he has doubts about religion.” Somehow they saw God in that complexity, and a suitability to be a spiritual father for their daughter.

Three pitchers of shockingly cold water were poured over my friend’s head at the Easter Vigil while she stood shivering in a stone pool. God found her in that moment, and I stood by with a towel and her glasses in my hand. I understood then that godparents don’t have to be perfect; we don’t even have to be guides. We just have to be present when it matters most. Walking in companionship with someone on a quest very few adults undertake is humbling simply because we become witnesses to a person taking a massive risk: the risk of opening herself up to faith.

That my goddaughter was willing to stand soaking wet, shivering and surrounded by strangers, meant that she was also willing to be found by God. As I stood with her, any skepticism and torpor I felt about religion became irrelevant for that moment. Standing with her meant that in that moment God also found me.

Kaya Oakes, who teaches writing at the University of California, is author of "The Nones Are Alright: A New Generation of Believers, Seekers, and Those in Between."

@kayaoakes
Show Comments (
2
)
Comments are automatically closed two weeks after an article's initial publication. See our comments policy for more.
William Rydberg
5 years 12 months ago
Don't know anything about baptism in Hinduism. But as far as Catholicism goes, You ought to request a formal change to the Baptismal Liturgy. For Godparents have real responsibities/accountabilities. Catholicism is not "me and Jesus", Godparents, teachers, pastors, politicians, etc.. Are all important players in the Economy of Salvation..having written a book I thought you would know this intuitively? The Baptismal Liturgy formalizes the Christian Catholic understanding of the.Sacrament, which was instituted personally by Jesus himself. Since we Catholic's understand him (Jesus) to be God come in the flesh, it would be accurate to say baptism was initiated by God himself... in Christ,
Bruce Snowden
5 years 11 months ago
Never knew my Godparents, just their family name. Was taught by the Sisters that, Godparents are intended to look after the spiritual training of the Godchild, when parents do not and even look after earthly needs, including helping financially as needed, but I wonder if this is ever done, maybe in just a here-and-there way, not accepted as a sacred responsibility by all Godparents. Responding a bit to writer, Kaya Oakes "shallow homilies" comment. I don't "tune out." I close my eyes as if at prayer and listen for a "word" that stirs. Little fish swim in shallow water, "little fish" meaning something homiletically useful. Perched on the Rock of the Word, as painfully jagged as that Rock might be, in shallow water, something spiritually beneficial always happens, perhaps a useful insight, proving to me that the Word of God never returns void and empty but does what it is supposed to so, just as Scripture assures.