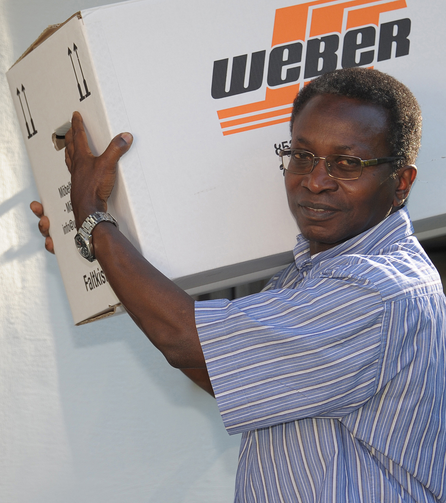 Bavarian officials and residents are rallying in support of a Congolese-born priest who has been receiving anonymous death threats and hate mail since standing up for refugees, leading him to abruptly leave his village parish.

The Roman Catholic priest, the Rev. Olivier Ndjimbi-Tshiende, told parishioners during Sunday Mass that as a consequence of the threats he would no longer serve the congregation in Zorneding, a community of 9,000 people about 25 kilometers (15 miles) east of Munich.

The 66-year-old priest initially said he'd still celebrate Easter Mass with the congregation this month and stay until April 1, but later changed his mind and instead left Zorneding immediately, high-ranking church officials and local community members said. He's expected to take a different position within the church, but details haven't been announced.

At the church rectory Tuesday, there was no sign of anyone inside and nobody answered the door. The church wouldn't say where the priest had gone.

Two small cardboard banners had been placed on the ground next to Ndjimbi-Tshiende's mailbox, reading "solidarity with the priest" and "arrest those who threatened the murder."

Moritz Dietz, a 21-year-old parishioner, said he only knew Ndjimbi-Tshiende as a smart and enlightened man.

"He even prayed for those who sent him those evil letters," he said, adding that he was still in shock over the departure and didn't know what exactly triggered the priest's final decision to leave.

Zorneding's deputy mayor, Bianka Poschenrieder, told The Associated Press that the threats and abuse came after Ndjimbi-Tshiende in November publicly criticized a local politician's assertion that Bavaria was being overrun by refugees.

"Still, I don't know why he now left in such a rush," Poschenrieder said. "It actually seemed like things had calmed down in recent weeks."

The deputy mayor sharply condemned the threats against the priest and expressed shock over his sudden departure.

"For our community this is very sad and I personally find it horrendous that these death threats have succeeded in pushing our priest out," she said. She said community officials, parishioners and police planned a candlelight vigil Wednesday night to show their solidarity with the priest.

Ndjimbi-Tshiende was born in Congo into a family of farmers, the third of six children. He first came to Germany to study philosophy at a Munich university in 1986. After finishing his degree, he returned to Congo, but couldn't find work there, according to his resume posted on the congregation's website.

In 2005, he came back to Germany and in 2012 he took over the St. Martin parish in Zorneding. It's not unusual for German congregations to have foreign priests lead their communities because there aren't enough German priests available to fill the posts.

Dietz, who is also a member of the community council and is organizing Wednesday's candlelight vigil, said he was very much hoping for a big turnout.

"I hope there will be thousands to show their support for our priest," he said.

Communities and cities across Germany have been struggling with the quick influx of more than 1 million asylum-seekers last year and resistance against the newcomers from Syria, Afghanistan and other countries, has been on the rise everywhere in Germany.

While Zorneding houses only around 50 asylum-seekers in temporary homes near the train station, the overall number of migrants arriving Germany has polarized society, with some expressing concern over the high number of refugees and others continuing to welcome people who have fled war and poverty.

Officials in Zorneding said their community had been divided over the influx of refugees to Germany and that Ndjimbi-Tshiende, with his outspoken support for the refugees in reaction to statements from the conservative community council member, had further polarized the village.

Munich prosecutors, who have been investigating the case, say the priest was sent three threatening letters, one with the message "we will send you to Auschwitz."

Prosecutors' spokesman Ken Heidenreich said that is considered a murder threat, while the other two read "we know where you live. We know where your car is."

The anonymous letters were sent to the priest between November 2015 and January 2016, he said, adding that the investigation is targeting "a person or persons unknown."

The local letter carrier dropped off a small package and assorted mail for Ndjimbi-Tshiende at the deserted, snowy rectory on Tuesday. The mailman, who refused to give his name, said the number of letters to the priest had at least doubled after he took a stand against racism and in support of refugees.