Friends are the New Family: A pioneering sitcom turns 20 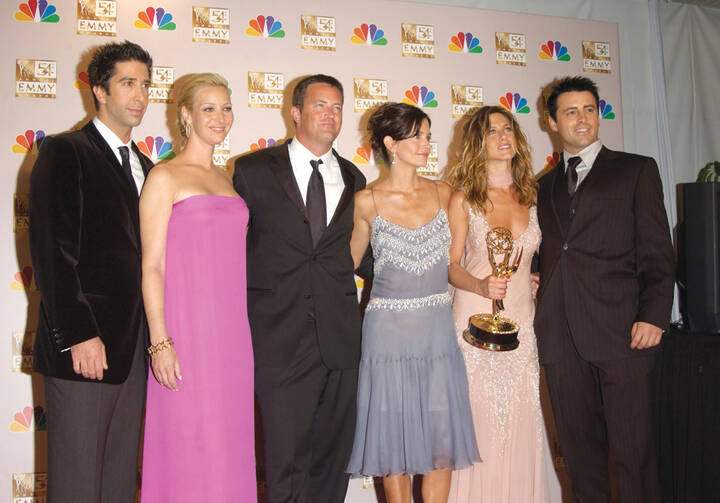 This month Friends turns 20. When I was that age, 20 years ago, I lay on the hardwood floor of my first apartment on Chicago’s North Side with my own group of friends and cynically watched NBC’s newest collection of beautiful people trying to be funny. As we made sarcastic comments to one another about how improbable it was that the characters were able to pay rent on such a large apartment while working as a line cook and a waitress in New York City, we caught ourselves genuinely laughing more than we expected. A lot more.

“Friends” became first our guilty, and then our not-so-guilty pleasure, as we realized that however beautiful the actors may be, however contrived their circumstances and however artificial their version of New York, it was, in fact, a really funny show.

As I watched with my friends, it was refreshing to see a show that presented the lives of a group of single 20-somethings living in the big city, who did not have the faintest clue about what was going to happen next. There were no five-year plans, no high-school sweethearts, no white picket fences; just fear and uncertainty, interspersed with a lot of comfort, understanding and, of course, humor. What I learned from “Friends” was that it was O.K. to not have a clue because at the end of the day, it was more important that there was someone there to listen at the end of the day.

Until the advent of “Friends,” the domestic and work spheres were two separate entities in the television universe. Television shows, sitcoms in particular, were about either the workplace and the relationships that occurred within that sphere—think “Cheers,” “The Mary Tyler Moore Show” or “Taxi”—or the domestic world of spouses and children—“The Cosby Show,” “All in the Family,” “Roseanne.” Sometimes, but infrequently, they were about both, as in “The Dick Van Dyke Show”; yet even in the rare instances when both milieus were featured, there was still a clear demarkation between the world of work and friendship and the world of home and family.

It could be argued that “Seinfeld” was the first to muddy the sitcom waters in relation to relationships; but “Seinfeld” is an exception in many ways. Though it may have been the first notable TV show to leave the realms of both work and family behind to focus solely on the relationships among young, urban professionals at sea, the fact that all the primary characters would rather have been with other, different people if their circumstances allowed it puts it outside the realm of the motif that “Friends” initiated.

“Friends” was born out of a very real shift occurring in the world at the start of the 1990s: the advent of Generation X—the post-Baby Boomer generation that had rejected the materialism and “family values” that came out of the 1980s and the Reagan era. Add to this a severe economic decline, and suddenly careerism took a back seat to financial insecurity. Marriage and kids were put on hold indefinitely in the face of unemployment and existential angst. Films like as “Reality Bites” and “Singles” placed this shift in the foreground with narratives focused on an unfocused cohort of 20-somethings, all trying to find their bearings in the swell of adulthood.

It could be argued that the whole Gen-X movement was a rejection of adulthood and responsibility and was the harbinger of the perma-adolescents—those 20- and 30-somethings still subsisting on their parents’ dime—so pervasive in today’s culture. Whatever it was, it opened the way for a renewed emphasis within our culture on what the Greeks called philia—love between two friends—and the depths and breadth to which friendships could go. “Friends” brought to the forefront the idea of the “chosen family.” Friends were no longer those people you left at the office or whose phone calls you answered in between kids’ soccer practices and ballet recitals. Friends were now people you spent time with after work, people with whom you spent your holidays and who may even walk you down the aisle at your wedding. Friends were the new family.

“Friends” became a cultural phenomenon: it inspired a hairdo, created a hit song, spawned myriad catchphrases and made all six of its cast members very, very wealthy. Though not nearly as influential as “Seinfeld,” its impact clearly can be seen in the stream of chosen-family shows that followed, like “How I Met Your Mother” (perhaps the most explicit “Friends” copycat), “New Girl” and “The Big Bang Theory.” The emphasis in all these shows is on an insular domestic world of urban 20-somethings who come together to support and care for one another in the absence of traditional familial structures.

The variances among these shows are slight. There are never any characters over 40 (even 30 is pushing it); they almost always reside in a large city; and invariably two or more of the characters pair up and marry. By the end of the run of“Friends,” all but one of the six main characters were married or soon to be married. And that one was the perennial ladies’ man, Joey, who happened to be the only character spinning off into his own show and as such needed to remain single in order to keep a fundamental aspect of his Joey-ness.

These neat endings send the message that it is fine to choose your family when you are young and attractive, but the traditional family model is still presented as the goal and something that should be achieved by your early to mid-30s. But perhaps that message might have more to do with the values Hollywood perpetuates than the chosen-family shows in and of themselves.

What the shows have done is reinforce the depth and relevance friendships can have by re-emphasizing philia, an understanding of love that C. S. Lewis called “the least natural” because it is unnecessary for survival, and yet paradoxically the most sacred exactly because it is not imperative. By de-emphasizing the professional world as well as the traditional familial construct, these shows have made it O.K. to feel not O.K. They have made it O.K. not to have it all figured out, so long as we have figured out one thing: the importance of showing care and concern for those around us.

Jake Martin, S.J., is a theology student at the Jesuit School of Theology of Santa Clara University, Berkeley, Calif., and the author of What’s So Funny About Faith?: A Memoir From the Intersection of Hilarious and Holy (Loyola Press).