Friend of the Devil: Innocence and angst collide in Robert Askins's 'Hand to God' 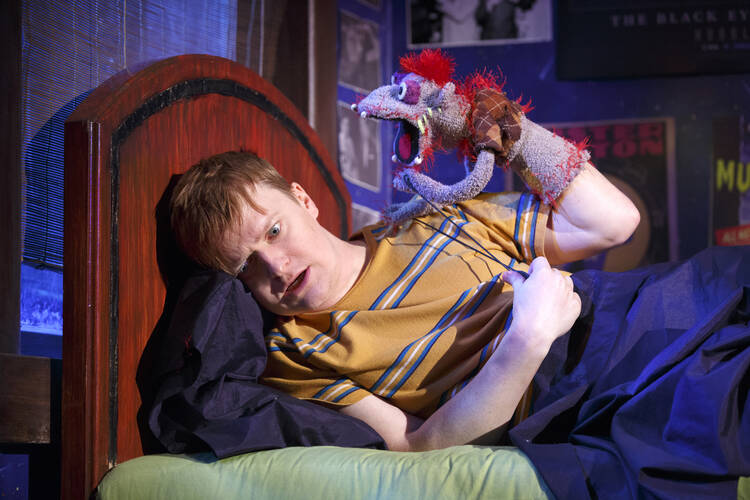 The first act of violence in the funny, harrowing new playHand to God is visited upon a helpless hand puppet. A shy, ambivalent teen, Jason, is trying to persuade his widowed mother to excuse him and Tyrone, the mangy homemade puppet that seems to have taken up permanent residence on Jason’s left arm, from the patently pathetic puppet ministry she’s undertaken at their Lutheran church outside Houston, Texas. It’s not the lameness of the endeavor that is giving Jason cold feet. It’s something much weirder and darker: He senses there’s something off about Tyrone, who appears to have a mind of his own, and has already ruined a promising tete-a-tete with a girl Jason's sweet on by blurting out lewd comments. But Mom is too attached to the puppet ministry as a rudder, something to give her purpose after her husband’s senseless death from overeating, and she’s not about to let Jason—or his star puppet—bail on her. So, in an impulsive act of frustration, Jason tears Tyrone’s head off. Oops! Guess Jason has never heard the truism that violence begets violence.

Yes, there will be blood by the denouement of Robert Askins’s play, now improbably but gratifyingly running on Broadway after two popular Off-Broadway productions, though the gore is ultimately more silly/gross than truly mortifying. This is still a species of comedy, after all, albeit one shot through with grief, mental illness and sexual predation. Perhaps what’s most touching about the show, and makes it much more than simply an exercise in bratty blasphemy, is its authentically teen-eyed view of Jason’s struggles with his mother and his own budding if stunted manhood. This vein of empathy is not only to the playwright’s credit but also due to the astounding lead performance of Steven Boyer, who’s about twice the age of his role but is utterly convincing as a sort of frail, inward-directed, not fully formed Charlie Brown type.

That’s only half of what Boyer does, of course: In a tour de force that is certain to catch the attention of Tony Award voters, he also acts out the aggressive actions and speech of his potty-mouthed id, Tyrone, who mysteriously resurrects himself after his early decapitation and proceeds to wreak vengeance on Jason’s sad little world. Tyrone has the gravelly, affrontive vocal delivery of an angry club comic, and two puny rod-controlled arms that Boyer manages to make as threatening as the puppet’s snarling, button-eyed glare. This possessed-puppet shtick is the conceit around which the whole play was built, in fact, after Askins met Boyer some years ago and recognized both his boyish innocence and the spiky angst simmering beneath it.

Geneva Carr, who plays Jason’s mother, was also a key to Askins’s original inspiration, and it’s easy to see why; the play’s portrait of a woman hurtling headlong over the verge of a nervous breakdown could slide into misogynist caricature without Carr’s crisp command of the role’s wide range, from buttoned-up repression to unhinged abandon. While no one would mistake the play’s unhealthy mother-son relationship for a subtly or sensitively rendered one, it is rooted—as are most if not all of the lurid absurdities of “Hand to God”—in real human pain and recognizable human behavior.

This is true of the other performances, as well, from Marc Kudisch’s gladhanding, self-involved but genuinely caring pastor to Michael Oberholtzer’s needy bully. Sarah Stiles plays Jason’s geeky love interest, Jessica, with a flawless, watchful deadpan, particularly in a second-act puppet sex scene that handily one-ups the infamous softcore of “Avenue Q” (Stiles has some experience in this area, having played Kate Monster in that cheeky puppet musical).

Under Moritz von Stuelpnagel’s incisive, clear-eyed direction, “Hand to God” buzzes along on perfectly calibrated waves of humor, suspense and transgression—at least in the first act, which delivers a gleeful jolt rare enough on Broadway to be hailed as a miracle. (The Netflix series “Unbreakable Kimmy Schmidt,” come to think of it, manages a similar feat, wringing bubbly laughter from dark material, also with a faux-naif religious overlay.) If the second act sags, comparatively, it is not only because the subject matter gets considerably more sobering but because the play hunkers down into stasis, as Jason and Tyrone occupy the church basement and turn it into a graffiti-covered den of sacrilegious horror while the other characters plot and spar upstairs. The juggling act of extreme behavior and extreme consequences, so expertly handled in the first half, may finally be more than a crowd-pleasing comedy can pull off. But make no mistake: “Hand to God” is a genuine and deserving crowd pleaser, not just because it’s devilishly entertaining but because this profane puppet show is also deeply felt.