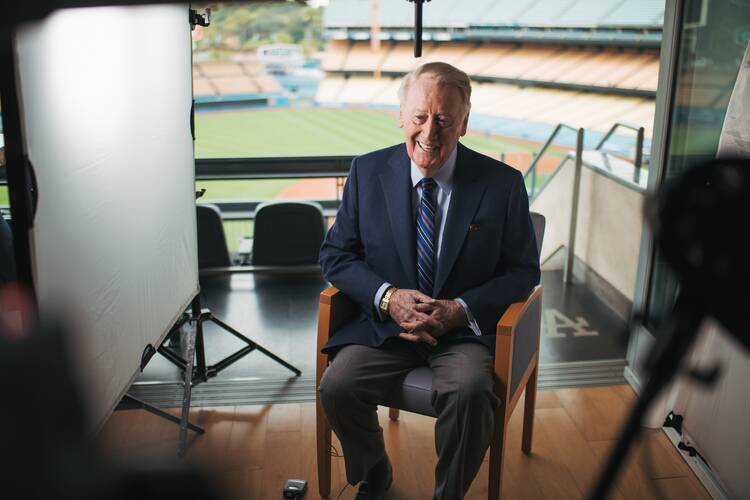 Among the signature moments of Reggie Jackson’s baseball career is one he would rather forget: a ninth-inning showdown in the 1978 World Series against the Dodgers’ reliever Bob Welch. The Yankee slugger had earned the nickname Mr. October for his World Series heroics against the Dodgers the year before, including one game where he hit three home runs on three consecutive pitches, and Welch was just a 21-year-old rookie who couldn’t throw much beyond fastballs. So he threw Jackson nine straight, the last a heater down the middle that Jackson swung at so hard he almost fell down. (He missed.)

The Dodger Stadium crowd went crazy: Reggie Jackson was the player everyone loved to hate. He didn’t have the kindest words for them, either, later dismissing them as “a baseball crowd that usually sits on its hands and waits for Vin Scully to tell them what they’re seeing. The usual Dodger Stadium crowd is about 50,000 people and 40,000 transistor radios.”

Vin can quote Shakespeare, compare an athlete’s muscles to the Belvedere Torso, explain why the number 13 isn’t really unlucky and bowdlerize a manager’s profanity-laced tirade on the spot.

But the impossible is happening. After 67 years of play-by-play for the Dodgers, Vin Scully, Southern California’s soundtrack to summertime, is retiring. Unless the Dodgers make the playoffs (THEY WILL), Oct. 2, 2016, will be his final broadcast, a few weeks before his 89th birthday.

That’s a lot of birthdays. But Vin has always been philosophical about length of years; three decades ago, he announced during a broadcast that Cubs slugger Andre Dawson had bruised his knee and was “listed as day-to-day.... Aren’t we all?”

Vin called Reggie’s strikeout on the radio, the medium for which he is famous, but he has also done television play-by-play for an astounding number of historic moments in sports. Remember Don Larsen’s perfect game to win the 1955 World Series? Vin called the game. Or the ball squirting between poor Bill Buckner’s legs in the 1986 World Series? Vin called that. Sandy Koufax’s perfect game in 1965? Vin. Joe Montana’s desperation touchdown pass to Dwight Clark to put the 49ers in their first Super Bowl? That was Vin, too. His call of Kirk Gibson’s game-winning home run in the 1988 World Series is legendary. He has narrated plenty of classic golf and tennis tournaments, too. Vin Scully even called the perfect game Kevin Costner tossed in that awful movie.

The city of Los Angeles just gave Dodger Stadium a new address: it’s now located at 1000 Vin Scully Avenue. X-Files fans hear his name every time they watch the show, because agent Mulder’s partner is named in his honor. For one short year, he was even given his own weekday variety program. And he has a star on the Hollywood Walk of Fame.

Why so much Sturm und Drang over an announcer? It’s that voice, first of all, that velvety tenor described by Chris Erskine of The Los Angeles Times as “full of swing, moxie and sonic opulence.” But the level of erudition is part of it, too. Vin can quote Shakespeare, compare an athlete’s muscles to the Belvedere Torso, explain why the number 13 isn’t really unlucky and bowdlerize a manager’s profanity-laced tirade on the spot. All in one evening.

Equally important has been the comfort of continuity. My father, as a teenager, as a Brooklyn Dodgers fan in the Washington Heights neighborhood of Manhattan, listened to Vin Scully. Think about that. In a sport that claims to be about tradition, the players and coaches come and go all the time; sometimes even the teams and stadiums do. But not Vin Scully.

Finally, there is the wisdom that comes through with every broadcast, some of it the result of a life well-lived, some of it earned the hard way. Though a private man, Scully has given a few interviews about his Catholic faith, including one with The National Catholic Register in 2013 in which he reflected on the death of his first wife and the loss of a son. “When my wife, Joan, died in 1972 at the age of 35, I was devastated, as were our children. We didn’t stop praying, though. The worst thing you can do in times of trial is to stop praying. The tough moments are when you need God the most. He’s always there and more than happy to give us His help; we need only ask for it,” Scully said.

“There are so many good things about the Church, but that might be the most essential thing I’ve learned from it: the importance of continual communication with God. That’s what all the kneelers, candles, incense, stained-glass windows, holy water and other things are about: directing our minds and hearts to God.”

Did Vin make the wrong choice 67 years ago? Maybe the guy should have been a spiritual director.

I love this piece. Anyone who loves sports understands how important the "Voice of [insert your beloved team here]" can become. Few, if any, will ever have as long and iconic a career as Vin Scully but growing up in Philadelphia, Harry Kalas was a fixture on Phillies broadcasts every summer (and most Fall/Winter as narrator for NFL Films) from 1971 until his death in 2009 (collapsing just before calling a game against the Washington Nationals). The way some friends of mine and I would discusss his passing at the time would have sounded to outsiders like an epochal, life-altering event. And it was in a way for us...

Thanks for writing this, Jim.