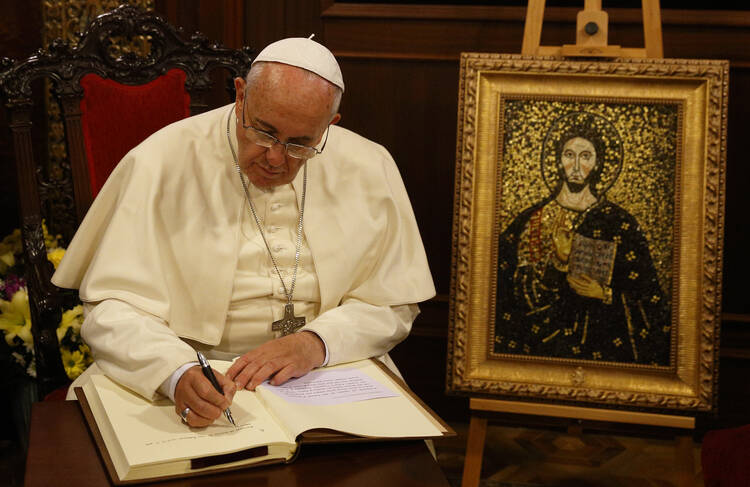 In addition to the use of gender-inclusive language, a first in official Catholic social encyclicals, one of the most amazing aspects of “Laudato Si’” are the footnotes. To be honest it was one of the very first things I looked at. Francis departs from the tradition of Catholic social encyclicals by citing several non-official Catholic sources including U.N. documents, national bishops’ conferences and, most surprisingly, a Sufi mystic!

Now, while this may seem somewhat pedantic for most readers, the footnotes of Francis are a significant departure from tradition. Most official papal encyclicals of Catholic social teaching have a specific style and the footnotes play an important role. Unlike the citations that my students use in their papers to attribute the origin of ideas, footnotes in papal teaching have functioned as a way to alert the reader to the text’s continuation of a tradition. Papal footnotes are generally concerned less with proper attribution and more with communicating that this teaching is in line with a long tradition on the matter—even when they may disagree slightly from the source.

For example, “Caritas in Veritate,” the 2009 social encyclical of Pope Benedict XVI, has 159 notes. They mostly reference the official social teachings of other popes; several speak to his own teachings; a few mention the writings of major saints or official Vatican offices. No mention is made of non-Catholic or non-doctrinal sources. This is largely also the case with the social encyclicals of Saint John Paul II.

This tradition reflects a specific theology of the papacy that understands the pope to be the primary teacher of Catholic doctrine with a strict division of roles between teacher and student. As such, the pope would never need to learn from sources “below” him. This also includes statements by national conferences of Catholic bishops. For over near 50 years, there has been a long debate as to the magisterial status of statements made by groups of bishops at the national, continental and global levels.

Under the pontificates of Pope John Paul II and Pope Benedict XVI, the social statements of national bishops’ conferences and synods were perceived as lacking authoritative teaching (magisterial) competency. This claim is frequently made by critics of the social policies of the United States Conference of Catholic Bishops, particularly their teachings on economic justice, peace and racism. In “Evangelii Gaudium,” Pope Francis addressed this point as he called for the development of the “juridical status of episcopal conferences” with “genuine doctrinal authority” to better serve the mission of the church (No. 32).

While not welcome by everyone, “Laudato Si’” affirms the authority of these regional structures with 20 citations of statements of 18 national and regional bishops’ conferences. This includes the 2001 statement of the U.S.C.C.B., “Global Climate Change: A Plea for Dialogue, Prudence and the Common Good.” The selection of statements from multiple regions of the world appears to make a point about the concerns expressed by bishops to the problems at hand. Indeed, it constructively shows how the fostering of an integral ecology is not simply the concern of Pope Francis. Although subtle, this is also a nod to an inductive and more decentralized vision of church, where the statements of bishops’ conferences have value in the formation of universal Catholic social teaching.

In addition to breaking tradition by citing statements from national conferences, Pope Francis draws from a range of Catholic thinkers. He cites Romano Guardini, an influential priest-theologian (1885-1968) eight times. He makes a surprise reference to the controversial Jesuit, Teilhard de Chardin, in footnote no. 53, and quotes, at length, Patriarch Bartholomew early on in the text. He also makes reference to a book published by Fordham University Press in footnote no. 15.

Perhaps the most surprising reference is to a Sufi Muslim mystic, Ali al-Khawas, in footnote no. 159, which beautifully reads:

The spiritual writer ‘Ali al-Khawas stresses from his own experience the need not to put too much distance between the creatures of the world and the interior experience of God. As he puts it: “Prejudice should not have us criticize those who seek ecstasy in music or poetry. There is a subtle mystery in each of the movements and sounds of this world. The initiate will capture what is being said when the wind blows, the trees sway, water flows, flies buzz, doors creak, birds sing, or in the sound of strings or flutes, the sighs of the sick, the groans of the afflicted.

This is even more striking when it comes in a section entitled, “Sacramental Signs and the Celebration of Rest” (No. 232). From a theological point of view, the inclusion of explicitly religious texts from outside the Catholic tradition raises interesting questions about the development of doctrine. What does it mean for an official statement of social doctrine to draw from a Muslim mystic? What does this say about the role of the Holy Spirit beyond the church?

Among the 172 footnotes in the encyclical, not all are from such surprising sources. The writings of John Paul II get referenced 37 times—the most for any one-figure reference is Pope Benedict XVI, a close second with 30 citations in the text. While some may try to distance the social teachings of Francis on the environment and the economy from his predecessors, these references, as is their purpose, should help remind the reader that he is building on a deeply established tradition of social concern.

As with other papal encyclicals, “Laudato Si’” highlights the importance of paying attention to the footnotes. As I tell my students in my courses on Catholic social teaching, follow the footnotes. You may be surprised where they will lead you.

Kevin Ahern is a theological ethicist and an assistant professor of religious studies at Manhattan College.

Show Comments (
1
)
Comments are automatically closed two weeks after an article's initial publication. See our comments policy for more.
Alfred Chavez
7 years 1 month ago
The idea that the statements of conferences and synods of Catholic bishops were perceived as lacking magisterial competency puzzles. What did the concept of collegiality mean if these pronouncements had no standing in the development and application of Catholic doctrine in papal teachings? Peter may be the ultimate "decider" but certainly all of the Apostles had a lot to say in the process of discerning the truths of our faith.