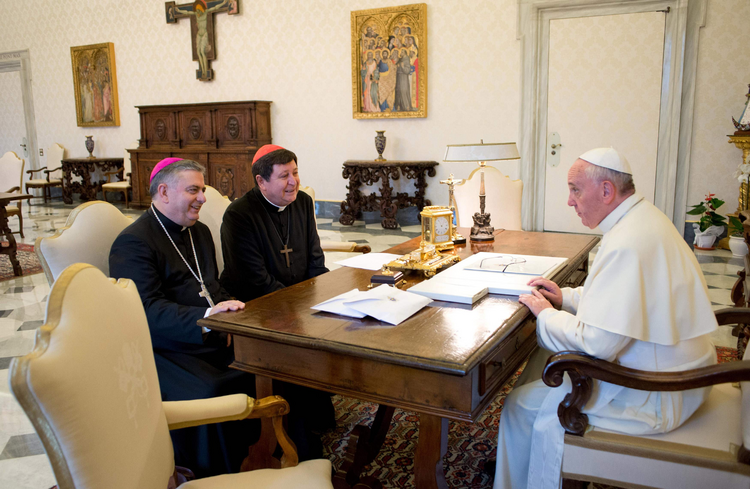 Before the year dedicated to consecrated life begins in November, the Vatican congregation for religious hopes to release its final report on the 2009-2010 visitation of U.S. women's communities. Archbishop Jose Rodriguez Carballo, secretary of the Congregation for Institutes of Consecrated Life and Societies of Apostolic Life, said, "We are working intensely on the final report, and after careful study and consideration, we think it will be made public soon. We're at a good point. I think we can conclude it before the beginning of the Year for Consecrated Life" in November.

The former prefect of the congregation, Cardinal Franc Rode, initiated the visitation in January 2009, saying its aim would be to study the community, prayer and apostolic life of the orders to learn why the number of religious women in the United States had declined so sharply since the 1960s.

Cardinal Aviz said the visitation of U.S. communities of women was completely separate from the Vatican-ordered reform of the U.S.-based Leadership Conference of Women Religious. The LCWR process, which is ongoing, he said, is not the responsibility of his office, but of the Vatican Congregation for the Doctrine of the Faith, which in 2012 ordered a reform of the group to ensure its fidelity to Catholic teaching in areas including abortion, euthanasia, women's ordination and homosexuality.

The Maryland-based LCWR is a Vatican-recognized organization that includes about 1,500 leaders of U.S. women's religious communities, representing about 80 percent of the country's 57,000 women religious.

The cardinal and archbishop also were asked about the appointment in August of a special commissioner to oversee the Franciscan Friars of the Immaculate and Pope Francis' order requiring all the friars "to celebrate the liturgy according to the ordinary rite," the post-Vatican II Mass. Use of the so-called extraordinary form or pre-Vatican II Latin Mass "must be explicitly authorized by the competent authorities for every religious or community that makes a request," the pope had said.

Archbishop Rodriguez Carballo said the appointment of the commissioner came after an apostolic visitation during which "74 percent of the members requested, in writing, an urgent intervention by the Holy See to resolve problems within the institute."

The appointment of the commissioner was not "a punishment on the part of the Holy See," he said, but a benevolent act expressing "the maternity of the church."

The widespread use of the extraordinary form of the Mass by the friars "absolutely was not the principal motive for our intervention," the archbishop said.

In the case of the Legionaries of Christ, who for more than three years have been undergoing a process of reflection and renewal, the archbishop noted that the process is overseen by a delegate appointed by and responding directly to the pope.

The process began in 2010, following revelations that the Legionaries' founder, Father Marcial Maciel Degollado, fathered children and sexually abused seminarians. Priests of the order have been holding an extraordinary general chapter in Rome since Jan. 8 to elect new leaders and approve new constitutions.

Questions have been raised over the past three years about whether the Legionaries could continue to be true to the order's founding charism or inspiration when the Vatican itself said their founder had been guilty of "seriously and objectively immoral behavior" and "real crimes," and had lived a "life devoid of scruples and of genuine religious meaning."

"Something that we are becoming more and more aware of," Cardinal Aviz said, "is that you must distinguish between the founder who brings a charism and the charism itself. This is a distinction we are learning to make because, honestly, it applies not only in the case of the Legionaries, but we have several similar cases, both ancient and new."

The cardinal did not list other problematic founders, but said: "Not all founders who bring the church a grace that is good and beautiful live according to the grace they communicate. This is something we must recognize. This is how it is."

Fortunately for the church, the cardinal said, "Sometimes the founder and the grace coincide."