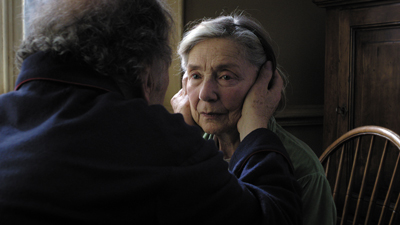 One of the first shots in Michael Haneke’s Amour—winner of the Palme d’Or at Cannes this year and Austria’s choice as its Oscar contender—suggest the final shot of his much-honored “Cache” (2005): A scene of a school just dismissed, teeming with young people, and tantalizing in its come-hither hint of cosmic answers. If only we had enough time, if only what we were seeing weren’t about to go so blithely by….

The fleetingness of life itself, and its slipperiness, anchor “Amour,” the story of a couple’s infirmity and demise. It is heartbreaking, and, if you like, a cautionary tale—the caution being: don’t get old. “Amour” is also a story about vanishing. As such, any audience familiar with the luminous Emmanuelle Riva and Jean-Louis Trintignant and the fact they are playing Haneke’s principals, long-married music teachers Anne and Georges, is at bit of a disadvantage regarding the director’s overall intentions. That early shot of “Amour,” mentioned above, takes place in a Parisian concert hall, the perspective from the stage shows a mass of music lovers filing into their seats, the usual pre-performance melee. The intent is anonymity. But if you know the actors, you can find them and spot them again in the next scene: backstage, where a group of young people is congratulating the performer who’s just left the stage (real-life pianist Alexandre Tharaud), and where the couple first appears in a mirror on the wall.

This kind of indirect revelation of the two—who are ignored, until Alexandre spots them—is a way of punctuating their increasingly tangential relationship to existence. And while the couple will endure many hardships, including Anne’s two strokes and Georges’ heroic efforts to care for her, one of the cruelest is their invisibility, the inevitable side-effect (in Western culture, at least) of old age.

“Amour” has been offhandedly characterized by some as Haneke Lite, or an instance of the austere Austrian turning sentimental, because his characters are elderly, tender and, as one usually defines it, civilized. Nothing could be further from the truth. The universe of “Amour” is as disinterested in humanity and its concerns as the one that enveloped Haneke’s underappreciated, end-of-the-world epic “Time of the Wolf” (2002), or the dice-playing “Cache” or the home-invasion nightmare “Funny Games” (1997, remade in 2007). These, mercifully, were stories in which the roulette wheel of Haneke’s casino of cosmic misfortune bankrupted only those characters who happened to be at the table. In “Amour,” the fate of Georges and Anne is something else. We may not all experience the same circumstances, but the upshot, for everyone, is inescapable. And what of it? What is it that matters in “Amour”? Love certainly, but what does love mean, especially in this kind of situation? What does human suffering signify about divine love?

The oft-remarked-upon absence of God from the films of Michael Haneke is a provocation: It’s an absence so pronounced one can’t help but think about God, and where God went. Or, for that matter, why God is never pursued. If prayers are uttered in “Amour” they’re done so silently. If there’s an afterlife on the couple’s mind, it never makes its way to their tongues. The most urgent matter for Anne and Georges is dignity—Anne makes Georges promise, after the first of two minor strokes and an arterial procedure has left her right side paralyzed, that he will never take her back to the hospital. If she’s going to die, she wants to do it in private. Never mind the soaked sheets, the diapers, the brutish caretaker, the loss of speech. People will not see her disintegrate. God is another story.

Haneke’s no dope, of course. He’s one of cinema’s more serious thinkers and he does not omit an Almighty out of carelessness. His oeuvre suggests something once said by the great Polish director, Krszysztof Kieslowski: “I don’t believe in God,” Kieslowski said, “but I have a good relationship with him.” Haneke’s relationship is not, perhaps, quite so good but, like Kieslowski, his films explore the contract people have with their universe, what they believe, where they devote their spiritual energies—music, in the case of Anne and Georges—and how they answer the question of why God might not answer their questions. There is the suggestion amid all this that if one’s major concern is indignity, one’s priorities may be askew.

Haneke is also a filmmaker of enormous craft and precision: More is learned from a few lines of dialogue, or the production design (Anne and Georges’ water-stained wallpaper, their enormous, ambitious but outdated stereo) than can be found in the entire filmographies of less gifted directors. And his ability to get such an emotionally devastating output from his actors—including Isabelle Huppert, who has been in a number of Haneke’s films and here plays Anne and Georges’ daughter—belies his public persona as the world’s chief perpetrator of a cinema of cruelty. When Georges has to pick Anne up, to move her from chair to chair or chair to bed, their reactions are a mix of awkwardness and familiarity, strangeness and long-abandoned desire and are performed in a way that suggests a relationship long ago relocated from the body to the mind, but with its memory intact and its mysteries sustained. While some things are very specific in a Haneke film, the nuances of the Anne-Georges marriage amounts to a symphony of suggestions, albeit with all its attendant dignity intact.

1
Father James Martin talks with the creator of Pixar’s ‘Soul’ about finding God in all things
Molly Cahill
2
An unholy trinity led to the Capital Riots: Fake news, fanaticism and a fetish for guns.
Kevin Clarke
3
Interview: What to expect when Pope Francis makes his historic trip to Iraq
Gerard O’Connell
4
Xavier Becerra, Biden’s HHS pick, is ‘an enemy of the health of women and the unborn,’ pro-life leaders say
J.D. Long-García
5
Nursing homes were broken long before Covid-19
John W. Miller