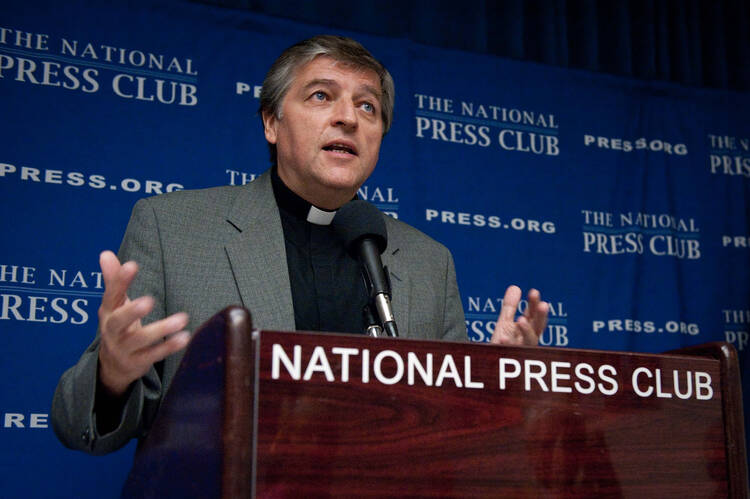 An Austrian priest who is urging the church to adopt practices ranging from greater lay involvement in decision-making to opening the priesthood to married men and women said the effort is aimed at upholding the decisions of the Second Vatican Council. Father Helmut Schuller, a parish pastor from the Archdiocese of Vienna, said during an appearance in Washington on July 22 that the church hierarchy should begin conversations that will build a "new structure" allowing for people to better share their gifts with the church.

"We think it's a question of respect for the dignity of the baptized, the church members, the church citizens as we call them. But also a question of bringing in the gifts of these laypeople to the decision making of the church and to the daily life of the church," he said at the National Press Club. Father Schuller was in the middle of a three-week, 15-city tour in the United States to discuss the Austrian Priests' Initiative. He said the initiative emerged in 2006 out of a concern for the declining number of priests in Austria and across Europe that has led to parish closings and consolidations.

At least two U.S. archbishops prohibited Father Schuller from speaking on archdiocesan property. Cardinal Sean P. O'Malley of Boston and Archbishop Charles J. Chaput of Philadelphia decided that because the Austrian's views are contrary to church teaching, he would not be permitted to appear at parishes or schools. The priest's U.S. tour began in New York on July 16 and was to conclude in Manhasset, N.Y. on Long Island Aug. 7. None of the priest's U.S. speaking engagements was scheduled at Catholic parishes.

In 2011, members of the Priests' Initiative issued an "Appeal to Disobedience." They called for changes in the church including allowing divorced Catholics in invalid second marriages and other Christians to receive Communion; fostering what the group says needs to be a more welcoming environment for gay and lesbian people and same-sex couples; and allowing properly trained laypeople to lead the Liturgy of the Word when Mass cannot be celebrated and to preach at Mass.

The Catholic Church teaches that Catholics who divorce and remarry without benefit of an annulment may not receive Communion until their subsequent marriage is regularized in the church. It also teaches that sharing the Eucharist with members of other Christian ecclesial communities is allowed only in rare and very narrowly defined situations. Regarding gay and lesbian Catholics, the church teaches that all people are made in the image and likeness of God and should be made to feel welcome in the church. However, church teaching regards all sexual activity outside of the legitimate marriage of one man and one woman as sinful.

Liturgical practices can vary by diocese and country, according to rules established by individual bishops and by bishops' conferences. The church permits trained laypeople to lead the Liturgy of the Word in the absence of a priest in some instances, but preaching is restricted to ordained ministers. The group claims 425 of Austria's 3,800 priests have endorsed the "Appeal to Disobedience."

Father Schuller said the clergy group wants the Vatican to revive the "Lex Ecclesiae Fundamentalis" project initiated by Pope Paul VI following Vatican II. The project sought to establish a common fundamental code or church constitution similar to a bill of rights for church members. The document was never promulgated; the project was shelved by Pope John Paul II in 1981.

The priest's tour was billed as "The Catholic Tipping Point," referring to a projection that five to seven years into the future the Eucharist could be unavailable to significant numbers of Catholics unless, his group says, the church begins to reconsider eligibility for priesthood. In each of his first four stops—New York, Boston, Philadelphia and Baltimore—Father Schuller met with small groups of priests. Tour sponsors said the number of priests in the meetings ranged from five to 20.

Father Schuller is considered a priest in good standing in his archdiocese. He served as vicar general from 1995 to 1999; Austrian Cardinal Christoph Schonborn of Vienna named him to the post but removed him four years later, assigning him to a parish, because of the priest's involvement in a group critical of how the hierarchy was addressing clergy sex abuse cases. He also is the former director of Caritas Austria.

Cardinal Schonborn has publicly urged the Priests' Initiative to recant its call to disobedience and has said he hopes disciplinary measures will not be necessary. Father Schuller told CNS he occasionally meets with the cardinal for lunch or dinner to discuss church governance issues. "He's sending signals to me that he's interested in continuing dialogue. He's not amused by what we are doing, but I told him sometimes it's not our job to make him be amused. He's looking for a middle way, I think, because he's realizing that the support for those things we are bringing forward is enormous at the base of the church and also of society," Father Schuller said.

In 2012, Pope Benedict XVI stripped the priest of his title of monsignor.

Father Schuller said priests in Austria are concerned with the loss of community in their ministry because they must travel from parish to parish to celebrate Mass and administer the sacraments with little opportunity to know the people in the multiple parishes they serve. It's a life to which few young men are attracted, he said. "They [young men] are looking at us priests and they are seeing what's going on now: to be priests for 20 or 25 villages; to travel around like little bishops; to climb out of your car to celebrate Mass; to climb back into your car and perhaps [have] some short dialogue with [parishioners], always beginning with 'Father, we know you don't have enough time, but let me speak to you a little bit.' I think that's a scandal," Father Schuller explained.

"In the moment, priesthood is destroyed not by the society, but by the bishops and the [church] code. Destroyed because the priests have to do their work in circumstances that are not really supportive anymore. They are burning out not because of the work load, but more out of the feeling that they cannot do their service, their ministry in the way they wanted to do it, in the real context of the people, with real companionship."

Father Schuller encouraged laypeople who share the concerns of the Priests' Initiative to come together and speak with a unified voice to their bishops and to Vatican officials. "It's important not to become isolated," he said.

He also expressed concern that young people have "lost patience" with current church leaders because they perceive little has changed in church governance despite years of dialogue between those seeking changes in church structure and diocesan bishops since Vatican II. He said young people hold the key to the future of the church. "They are saying we should move on, we should not ask for much. We have to try to win them back by really taking courageous steps in practice and reform wherever we can and they will be with us there," he said.

In the Boston Archdiocese, Father Schuller's on July 17 presentation was moved from St. Susanna Parish in Dedham, Mass., to a nearby Unitarian Universalist church. Organizers said the event drew an overflow crowd of more than 650 people.

Kenneth A. Gavin, director of communications for the Philadelphia Archdiocese, said in a statement that Father Schuller's views "diverge seriously from Catholic belief and practice" and therefore he could not speak at any parish or archdiocesan-related facility. He called it "regrettable" that the college allowed its venue to be used for Father Schuller's program even though the school was not sponsoring his appearance. He said doing so "inevitably damages the unity of the local church."

A college spokeswoman said in a statement that the college's conference center was rented by an outside organization. "The college serves merely as the site for the event, having agreed to rent the facility several months ago as part of the college's continuing mission to encourage dialogue on issues of importance in society," the statement said.

The tour was sponsored by 10 organizations that publicly disagree with the Catholic Church's teaching prohibiting women priests, married priests and same-sex marriage. They include Call to Action, Catholics in Alliance for the Common Good, CORPUS, DignityUSA, FutureChurch, National Coalition of American Nuns, New Ways Ministry, Voice of the Faithful, Quixote Center and Women's Ordination Conference.

Catholic News Service
Show Comments (
1
)
Comments are automatically closed two weeks after an article's initial publication. See our comments policy for more.
Bill Mazzella
8 years 6 months ago
Dioceses and parish priests still place obedience over the gospel. Attributes of a military culture as opposed to culture anointed to free the captives. As Francis repeats--a large part of the world is poor...Meanwhile bishops and pastors cater to the Knights of Malta and the moneyed class. The people do not provide soldiers for this monarchy.. which is limping because it is lifeless.