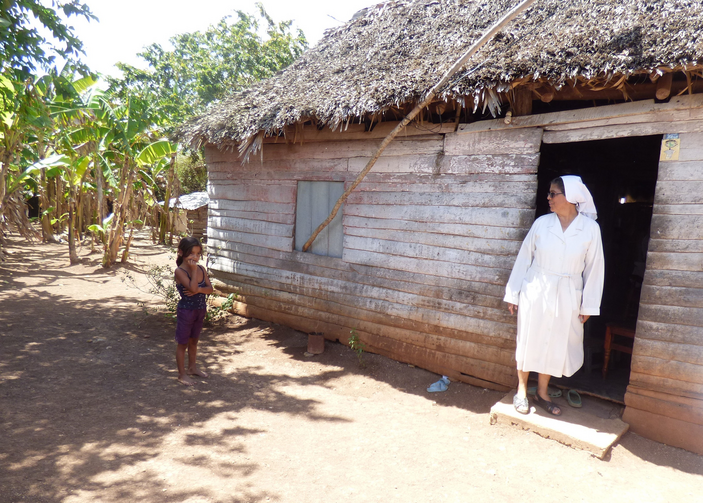 In 2004, with the divorce rate looming around 70 percent in Cuba, the Catholic Church called for a "year of the family."

Even among Catholics back then, there was little hope that workshops, discussions and reflection would do much good to remedy the situation. A decade later, the figure of divorce on the island hovers in the 60-65 percent range, and it's hard to say how many of those are Catholic.

With a high divorce rate, secularism, a societal change of values, "there's little to conserve of the fabric" of Cuba's traditional concept of family, said Bishop Alvaro Beyra Luarca of Bayamo-Manzanillo.

Some say the exodus of Cubans who have left the island for any number of reasons—economic, professional or political—is a big factor that has threatened and eroded the concept of the traditional family in Cuba, but there are many other factors, too, Bishop Beyra said.

As the Catholic Church prepares for this fall's World Meeting of Families in Philadelphia, the challenges being faced by what's left of the Cuban family weighs on those concerned with how it will affect the country and the church.

When St. John Paul II visited Cuba in 1998 and celebrated Mass in Santa Clara, in the center of the island, he recognized the country's dire situation.

"The social situation experienced in this beloved country has created not a few difficulties for family stability: for example, material scarcities—as when wages are not sufficient or have a very limited buying power—dissatisfaction for ideological reasons, the attraction of the consumer society," he said. "These and other measures involving labor or other matters have helped to intensify a problem which has existed in Cuba for years: People being obliged to be away from the family within the country, and emigration, which has torn apart whole families and caused suffering for a large part of the population."

The Center for Demographic Studies at the University of Havana said the country's divorce rate had almost tripled in four decades, rising from 22 divorces per 100 marriages in 1970 to 64 in 2009. In 1960, Cuba had the highest fertility rate it had seen since the end of World War II, but today it has one oldest populations in Latin America. According to recent figures from the U.N., about 70 percent of women of child-bearing age use a form of birth control, and abortion is readily available on the island.

For the Catholic Church, the family is a strong component of faith, the "domestic church" as the Second Vatican Council called it. But if there is no "domestic church," or a frayed one, what does it mean for the future of the church on the island?

The problem is a complicated one, said Father Juan Elizalde of Bayamo, in eastern Cuba. These days, shaped by secularism or because of economic uncertainty, young or old, few Cubans have a concept of embarking on a "lifelong project" that is marriage with another person, much less having children with them, he said.

Among young people, he said, many do not want to make a commitment. What becomes important is not having commitments. Some worry about not being able to provide, while other see marriage and children as a hindrance.

On her way to visit a household of seven children, Sister Olga Arias, a member of the Sisters of Charity of St. Anne, said the challenge of transmitting the values of the church when it comes to family and marriage can be daunting. For many in Cuba, the biggest concern that exists is simply to survive, and the church has to be sensitive to what they're going through, she said.

She could talk to those she serves about the Synod of Bishops on the family, but "they're not going to understand," she said. What's important is to tend to people, understand their daily realities, whatever those might be. But there are a lot of meetings among church leaders without seeing how families get by each day, she said.

Even among Cuban families with married and professional parents, economic hardship plays a role in its disintegration. Sometimes one of the parents leaves the island to be able to provide for the family from afar, but sometimes that separation can also be harmful, Bishop Beyra said.

However, he added, another factor affecting the family in Cuba is the damage brought on by the secularization of social values, and the country is not alone in that respect.

Father Elizalde said it's a hard phenomenon to fight against, but it's especially difficult in Cuba. These days, many Cubans prefer to have "a friend," instead of a spouse, and preferably no children, Father Elizalde said, opting to live in the present because they don't know what the future on the island holds.