After the Flaw: Noticing the little 'ifs' during Lent 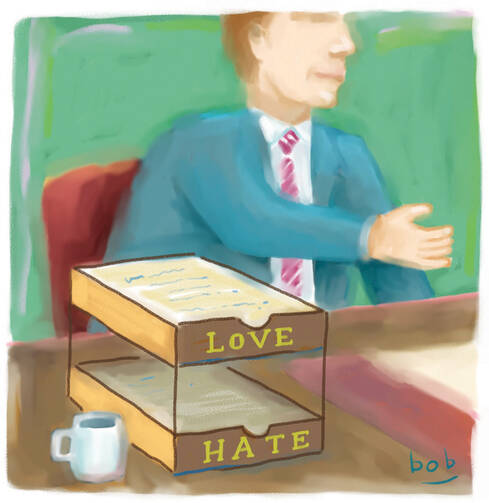 If you have ever thrown an elbow or slid cleats high. If you ever snapped back or punched first. If you have ever quietly stolen inconsequential things, small pieces of candy from a store, a magazine from a waiting room. If you have wiped your mouth on someone’s dish towel and hung it back up. If you have argued from authority.

If you decided somewhere along the way—without even realizing it—that you would not have a relationship with the plaintive, pith-helmeted mail carrier. Instead you two would walk by each other day after day like creatures from a sad divorce eons ago who had forgotten they ever knew each other.

If you don’t wash your hands, not much.

If you walk by figures sleeping on the concrete under rough gray blankets and quietly wonder where they screwed up to get themselves there; and then feel incredibly judgmental for thinking such things. And then wondering again: Really, what did they do?

If some reasonable cleric ever told you that the Greek word for sin means “missing the mark,” and you turned that into a kind of general pass for yourself. As if somehow all the inane, corrupt or just mildly sad things you do could be melted down and written off into a darts allegory.

If the thought of one more dilation and extraction happening between one more pair of terrified legs leaves you swamped with so much despair and rage you just want to give up the whole cause altogether.

If you are a resolute pacifist in regard to wars no one wants you at anyway, but undertake silent acts of violence against any number of people who flash into your mind all day long.

If you do not think you are allowed three consecutive moments of honest anger.

If you meet every slight, each missed appointment, every unreturned phone call, with “It’s all right,” or “You were probably busy,” or a quick look away and “No worries”; and so melt away bit by bit into people’s dim consciousness of you as one whose time or expectations are not really to be taken seriously.

The little things. The things so small you barely notice them—minor life habits, interior dispositions, inclinations, forgettings. The way you let darkness settle over you and become you. A letting go, a relaxing of standards, a reorienting of priorities. Venial matters. “A disordered affection for created goods,” to put it doctrinally. Things you didn’t even know could count against you, but somehow are reducing you, reducing you.

If there is a hint of irony or sarcasm in everything you do and thus no one feels as if they know you. And not in the way that we are all ultimately unknowable, as God is unknowable, and all sentient beings blessed into the dirt of conventional reality are unknowable. But unknowable as in, just, we wish we knew you a little.

If you seem not to have become the person you wanted to be because…because…you’re lazy. And it is not your dad’s fault or the world’s fault or low blood sugar or a failure to ingrain into the depths of your soul like some Paul Simon hook the fact that God loves you—but because you are 32 and very talented and very smart and you play a stupendous amount of video games.

If you are a heroic and beloved ghetto nurse or teacher or priest and don’t understand why the people who actually live with you can barely put up with you. And you assume it is because, sadly enough, they are probably jealous.

If you are really, honestly, just not very nice. Not to anybody.

In the dharma there is no concept of sin. There is only behaving in a karmically unskillful way toward other human beings. Says my skillful professor.

How absolutely lovely, you think. Unskillful. The darts, a dark basement, a few too many drinks. Easily remedied things.

If you meet with lawyers and sign papers and pack boxes and are still unable to admit that you and your wife are getting a divorce.

If you have had little injections of disease into those lines between your eyebrows, and your clever religious daughter told you that just as Christ became sin in order to redeem mankind, you have become botulinum toxin in order to redeem your face. And once you actually considered this, it did seem that way. You took a risk putting that stuff under your skin. And there is a payoff: You are making the world a little more pleasant for anyone who looks at you. You are—her words—“giving praise and glory” through the humble vessel of your unruffled skin.

The little illusions, the avoiding of reality. The nimble blades of pride. The things we all do. Your bad is not so bad. It will never get into the paper. You’re a good person, after all, everyone knows it. You were a member of the National Honor Society. But your lack, your lack, it is still there. Life is dukkha, says the Buddha. Life is suffering. Better translation: Life is flawed. And to deny there is a flaw is to really suffer.

(And if you have ever gotten outraged beyond proportion when someone who wasn’t even Eastern told you things like “life is suffering.” Still the flaw, the flaw.)

If you ever had sex before marriage and felt it to be very helpful to your general well-being and wondered why religious people always told you it was wrong. Why did they tell you that you as the girl would use sex to get love and that you as the guy would use love to get sex and the two of you would become part of each other? And that, when it was over, you would be like two boards pried apart, splinters left in each other forever?

Wasn’t that the image the handsome secondary virgin used in the high school gym, bursting out of his Asics dry-fit? And you feel like the sin, the real sin, is being told sex is bad—even though no one ever told you sex is bad. But you somehow got that message. Until you specifically decided to revolt against that message at fall break of freshman year when your roommate had gone back to Dubuque and the place was all yours.

Somewhere, or somehow, in you, or in the virgin who wasn’t a virgin, or church, or the way religious people talk about sex or sexual people hear religion, or the fallenness of humanity, or the ruddy pleasures of Maxim magazine, or that ironic burlesque outfit on the Lower East Side where even your doe-eyed mother could enjoy a drink without feeling too seamy...somewhere in all of this—the flaw. A flaw that leaves you declaring that any thoughtful moral process should be forbidden from all decisions about sex; or, alternatively, any sexual desire should be interrogated so much as to become like a dictator dispensing unwanted shame into your life; or the whole thing run from in fear like a terrorist lurking in the subway.

The flaw, the flaw…

And if you don’t think much of yourself. If you believe, frankly, that you are pretty much a dirtbag. And just saying that actually gives you a sense of relief. But then that relief does not melt away the fact that you still think you are horrible. And what do you do when this and all the other clear proofs of your utter wretchedness come piling down like leaves made of stone from a tree made of poison? Where do you turn then?

You have not slept with another man’s wife or burned a cross on a lawn or shifted massive amounts of funds where they shouldn’t be shifted. You just do some things and fail to do other things.

If you pay occasional witness from a newspaper to distant wars, to their I.E.D.’s and casualty lists, their market squares and holy festivals blown to pieces, to the small photos of stony-faced dead kids from Oklahoma and wonder why the whole thing doesn’t seem to worm its way one inch into your heart.

If your quest for moral perfection is slowly killing you.

If you do any of this, or any of it is done to you—the flaws, the sins, the marks missed. An unhinged world pressed on your soul, or your unhinged sins visited on the world. If this is the case, then the church season of Lent is for you. These days are for you not even because you are necessarily Catholic or Christian or believe in God or saints or crucifixes as scaffolding constructed for the dismantling of all wrongs. But because other people do.

And those other people take time to name these wrongs. They name them and so, like Adam and his beasts, have some dominion over them. And those who do not do any of this naming can at least take comfort or nostalgia—as in a deep green Packard or Joan Fontaine—that some people are out there plugging away at this ecclesial Fourth Step. Through incense and kneelers and soft lulling chants they are grounding down, getting into the deep sadness of themselves. Putting their conscience through its paces. And something about Jesus, and something about redemption. Something about laying all on the king.

But first taking firm hold of the flaws, no matter how small, and gazing in confusion and sorrow and wonder.

Joseph P. Hoover, a Jesuit brother, is a student at the Jesuit School of Theology of Santa Clara University, in Berkeley, Calif. A version of this article was published on the Web site www.thejesuitpost.org.

Show Comments (
3
)
Comments are automatically closed two weeks after an article's initial publication. See our comments policy for more.
Mary Pearlman
9 years 6 months ago
Forty days of tears, and yes, flaws. For I read this article of course believing that I would be reading about someone else's. Thank you. God Bless you.
Mister Heche
9 years 6 months ago
Lent is coming! In addition to penance, fasting, and confession, the viewing of spiritual films can be a powerful activity during lent. Pius Media, an on-line Catholic film rental company has an abundant number of films that would be appropriate for lenten viewing. Beyond lenten interest, if your family, like mine, is interested in family-friendly videos, including children's videos, classic movies, and movies with a Catholic theme, I highly recommend that you check out Pius Media, which operates just like Netflix, with video rental by mail. More details here: http://allhands-ondeck.blogspot.com/2013/01/recommended-pius-media-for-catholic.html
CAROL OSTEN
9 years 5 months ago
..."venial matters"....venial sins -- what an interesting examination of conscience, meditation. Thank you.