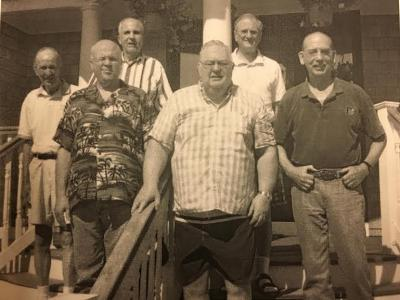 When men join the Jesuits they are reminded that few Jesuits become famous—John Courtney Murray, Pope Francis—but many will engage in unsung work in which they touch countless lives. Edward Glynn, S.J., born one of nine children in Clarks Summit, Pa., joined the Society of Jesus in 1955 and was ordained in 1967. Known early as an athlete, sports fan, intellectual and activist, he was also a natural leader.

In the early 1970s, while teaching theology at Georgetown, he also wrote for America. His topics included the Democratic convention of 1972, women’s liberation, just war theory, amnesty for draft resisters, Washington politics and the Watergate scandal. But his great skill was as an administrator, listener and decider. He served as superior of the Maryland Province of the Society of Jesus and as president of Gonzaga University in Spokane, John Carroll University in Cleveland and St. Peter’s College in Jersey City. In 2007 he established Christ the King Preparatory School in Newark, a Cristo Rey high school. Perhaps overworked, he suffered a heart attack and moved to the Jesuit infirmary St. Claude de la Colombière in Baltimore.

Father Glynn vacationed every summer in Sea Bright, N.J., with Jesuit friends. The ocean waves there once broke his neck, but he still loved to look out over the sea—symbolic of the multitudes touched by his leadership, friendship and priestly presence. His heart gave out on Jan. 24, but his spirit will be there next year.

The Editors
Show Comments (
1
)
Comments are automatically closed two weeks after an article's initial publication. See our comments policy for more.
Henry George
5 years 3 months ago
Ed was a hard worker. What the Society of Jesus needs to ask itself is whether there is an ideological test for men to enter the novitiate and taking vows and remaining in the Society of Jesus. After all it is Jesus' Society, not the personal realm of those who have vows but sadly seek idealogical purity.