Dreaming On: Tales of modern immigration 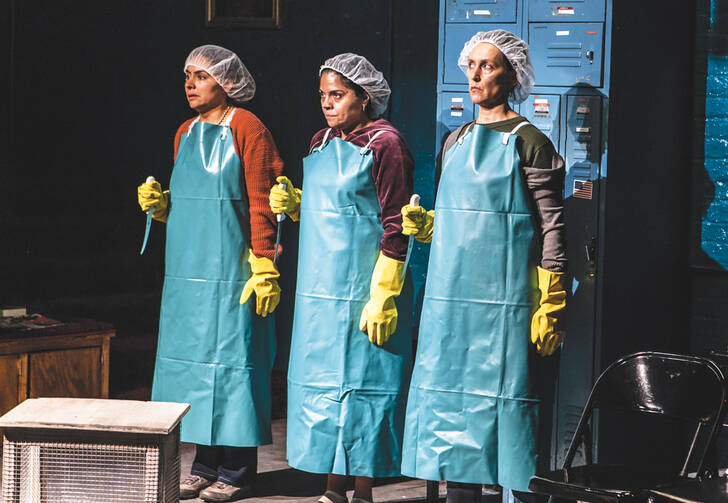 A cynic might suggest that one way to keep immigrants from wanting to come to the United States would be to show them a dystopian exposé like To the Bone, Lisa Ramirez’s affecting if wildly uneven new Off Broadway play about undocumented female poultry workers slaving away thanklessly in Sullivan County, N.Y. That is not entirely fair, though, since the tense, gnarly tale that unfolds among a quintet of Central American women and a few men in their lives is not unrelentingly bleak. Indeed, one of the play’s most sneakily shocking moments comes when after a particularly tragic incident near the show’s end, the women calmly set out a card table and a cooler in their backyard for another of their impromptu social gatherings.

This abrupt transition does more than mark the passage of time; it also drives home a point the show has been quietly making all along, alongside its more bold-faced statements about structural injustice and economic oppression: that the working poor everywhere, regardless of their immigration status or other obstacles, make a life and a home for themselves even amid the worst conditions.

This adaptive persistence, albeit in a more middle-class milieu, is also among the revelations of Aldo Bello’s documentary/advocacy film Dream: An American Story, which is being shown around the country this fall, presumably timed for the midterm elections. Bello’s central case study is the story of the Gómez family, Colombians who decided to stay in Miami after their request for asylum was denied and their work permits expired, all the while raising the two Colombian-born sons, Alex and Juan, they had brought to America as toddlers. These boys would hence become prototypical “dreamers,” young Americans in all but their legal status, whose liminal status the DREAM Act legislation was crafted to resolve.

Though Juan, who emerges in the film as a stoical pragmatist and who now works in São Paulo, Brazil, lives a life far removed from the killing floors of Sullivan County, he is no less prey to the existential uncertainty that haunts the undocumented—those nearly 12 million people described as living “in the shadows” while the nation’s polarized immigration politics churn unhelpfully around them.

Neither “To the Bone” nor “Dream,” though, directly engages these contentious politics or gives an explanation as to why immigration reform has become such a third rail that even the relatively supportive President Obama has bowed to pressure, opting to defer action on the current border crisis until after the midterm elections. This deficit of perspective is less of a problem for Ramirez’s play, a work of dramatic fiction, than for Bello’s film, which aims to be persuasive. The voices of opposition we hear in “Dream” are bilious snippets of talk radio, brief samples of House Republican talking points during the vote for the DREAM Act (it is described as “affirmative action amnesty,” a clumsy bit of alliterative dog-whistling) and a sign or two at a Washington march. The president’s stunning decision in 2012 to take executive action to defer deportation for some young undocumented immigrants is portrayed as the culmination of a drama in which activists worked to raise the profile of the DREAM Act, only to see it dashed in Congress by Republican obstruction.

While the film does not spare Obama from the just criticism that he has become a sort of deporter-in-chief—there is a recurring title card about the mounting millions who have been flushed from the United States during his presidency—it also leaves viewers yearning for a clearer sense of the election-year political calculus underpinning his executive action and the somewhat bumbling maneuvers among cautious, Republican reformers like Marco Rubio of Florida or John McCain of Arizona. The film’s argument for a saner immigration policy chiefly emerges through a personal lens—the sad, lonely saga of over-achieving Juan Gómez, whose best efforts end up thwarted by our broken system. The political backdrop for his story would be filled in immeasurably by even just one voice who could answer for Republican recalcitrance.

By contrast, the debate that rages in “To the Bone,” and which gives it inarguable momentum even as its plot strands get tangled in melodrama, is between dueling matriarchs, Olga (played by the playwright Ramirez) and Reina (Annie Henk). Olga is a dyspeptic, perpetually aggrieved fighter whose ever-simmering anger, even when she is in the right, is compellingly unpleasant; Reina, meanwhile, is a go-along-to-get-along peacemaker, better able to compartmentalize the indignities of the workplace and the comforts of hard-won domesticity. Between these two poles are the more tender Juana (Liza Fernández), in mourning for a lost daughter, and Carmen (Xochitl Romero), a new arrival whose disastrous fate gets caught in the crossfire between Olga and Reina.

The true child of this warring household, a quintessential teenaged “dreamer” named Lupe (Paola Lazaro-Múñoz), provides the most hopeful note in “To the Bone.” She has Olga’s strength, minus the bitterness, and Reina’s determination, minus the denial. If “To the Bone” belongs resolutely to the muckraking tradition of American storytelling, in which the experiences of the “least of these” are offered as a stark diagnosis of the state of the national character, the endearingly tough, transparent Lupe points a way forward for this nation of immigrants—if we are willing to take it.