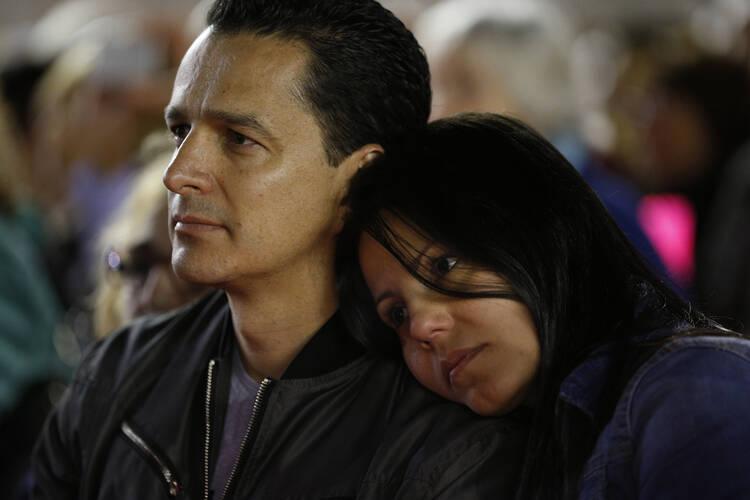 One word that occurs repeatedly in Pope Francis’s new apostolic exhortation on the family and love is “discernment.” For Jesuits like the pope, the word is not a generic phrase but one with a specific meaning. Understanding discernment, then, is key to understanding “Amoris Laetitia,” as well as the pope’s overall approach to pastoral care. His use of discernment is closely tied to the idea of conscience, also highlighted in this document, particularly for those facing complex spiritual decisions.

In the popular imagination, a “discerning” person is one with good taste or a good eye. They judge well and wisely. A person is said to be a discerning judge of art, food or wine, for example. “Discernment” in common usage is the ability to judge wisely and to be able to choose carefully among many choices.

For the Jesuit, however, “discernment” means something much more. It is the art of prayerful decision-making that uses specific spiritual practices. The Jesuit tradition of discernment is rooted in the Spiritual Exercises, the classic manual on prayer written by St. Ignatius Loyola, the 16th-century founder of the Jesuits. In fact, one of the main goals of the Spiritual Exercises is to teach people about discernment.

Discernment for St. Ignatius means being aware that God wants us to make good decisions, that God will help us make good decisions—but that we are often moved by competing forces: ones that pull us toward God and ones that push us away. Anyone who has ever made an important decision knows this experience. You feel pushed and pulled by a variety of inner forces: selfish versus generous motives, free versus unfree motives, and healthy versus unhealthy motives.

So discernment is the ability to see clearly what those forces are; to be able to identify, weigh and judge them; and finally to choose the path most in line with God’s desires for you and for the world. It takes into account the richness and complexity of a person’s life and—most importantly—assumes that God is active in the decision-making process.  As Ignatius says, “The Creator deals with the creature directly.”

Thus, it is not as simple as blindly following certain rules and regulations. Needless to say, the Gospels and church teaching are essential to form one’s conscience, but particularly in times of complexity one must also rely on God’s own promptings and activity in one’s own heart.

How does one discern? There are many practices and methods outlined in the Spiritual Exercises. Let me highlight some general ones.

First, you try to be “indifferent”—that is, free of anything keeping you from following God’s desires. For example, if you are discerning whether or not to visit a sick friend in the hospital and you are overly worried about getting sick, you are not “free.” Something is preventing you from doing a good thing. “Indifferent” does not mean that you don’t care, but that you are free to follow God’s desires.

Second, you ask for God’s help. Discernment is not done on your own. You need God’s help to choose the right path. You also need to reflect on the Gospels and church teaching, as a way of starting with a good foundation. (That is, you would never “discern” if you should murder someone.) All this is done in the context of prayer. But the intellect is fully engaged as well. As Jesuits like to say, “Trust your heart, but use your head.”

Third, you weigh the various “movements” within oneself, to see which may be coming from God, and which may not be. For someone progressing in the spiritual life, says St. Ignatius, the “good spirit” will bring support, encouragement and peace of mind. Think of someone who decides to forgive another person and who feels a sense of calm consolation when they think about it. The opposite is true of the “evil spirit.” That spirit causes “gnawing anxiety” and throws up “false obstacles” designed to impede one’s spiritual progress. Usually this manifests as the voice of selfishness. In the case of the person seeking to forgive another, the “evil spirit” will say, “If you forgive, people will see you as a doormat!”

Interestingly, says, Ignatius, for the person going the opposite way (from good to bad), things are reversed. The “good spirit” is not encouraging, but instead wakes you up with a start. That’s the sting of conscience. The “evil spirit,” by contrast, is encouraging of bad behavior. “Don’t worry. Keep stealing from your company. Everyone does it. Go on.” The person who is experienced in discernment soon becomes adept at identifying these often subtle movements in one’s heart.

Fourth, if there is no clear answer, you can rely on other practices, each suggested by Ignatius. You could imagine someone in the same situation you are, and think about what advice you would give him or her. (That can help lessen the influence of our own selfish desires in the discernment.) Or imagine what you would want to tell Jesus at the Last Judgment. (That doesn’t work for every decision, but particularly for complex ethical decisions it can be clarifying.) Or think of how you would judge your decision on your deathbed. (This can help prioritizing what is most important in your life.)

Finally, after making a good discernment you will feel a sense of what Ignatius calls “confirmation,” or a sense of rightness. You feel in line with God’s desires for you because you are in line with them. And this naturally brings peace.

The pope’s exhortation is addressed not only to families and individuals, but also to pastors and others responsible for helping people form their consciences. Not every person or pastor will make use of all the traditional practices of discernment. But for both individuals and pastors, the overall perspective that discernment offers—that God wants to help us make good decisions, and by paying attention to our hearts we can hear God’s voice—is helpful in every case.

“Amoris Laetitia” speaks over and over about discernment and conscience. It reminds us that while rules are important, in pastoral settings something else is needed and relied upon—God’s gracious activity within the heart of believers, which helps them to make good, healthy and life-giving decisions.

James Martin, S.J., is an editor at large at America.

@jamesmartinsj
Show Comments (
2
)
Comments are automatically closed two weeks after an article's initial publication. See our comments policy for more.
Lisa Weber
6 years 7 months ago
This is a nice overview of discernment as understood in a Jesuit tradition. I like that Pope Francis seems to think that people are able to think for themselves. It's a refreshing change.
Richard Murray
6 years 7 months ago
Dear Friends, After having been silent on religion for some months, Ross Douthat at the zionist New York Times has said more subterfuge and nonsense about Pope Francis’ “Amoris Laetitia.” Here’s a critique of Douthat’s article: https://scripturefinds.wordpress.com/2016/04/10/part-ii-ross-douthat-is-a-literary-fukushima/ And here is a downloadable version: https://www.academia.edu/24247902/Ross_Douthat_Is_a_Literary_Fukushima_Part_II