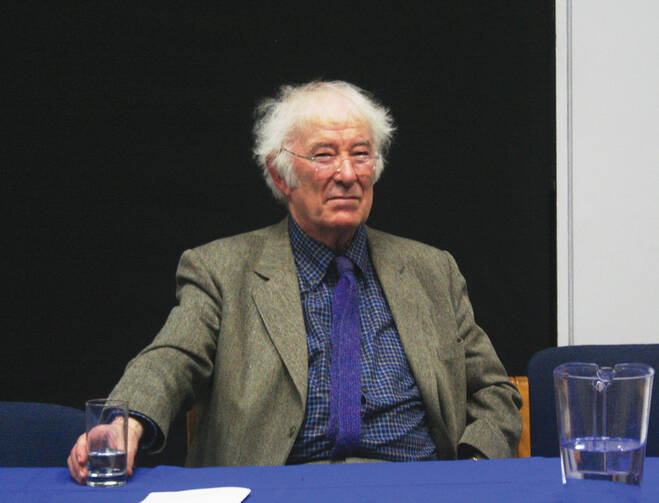 …big soft buffetings come at the car sideways
And catch the heart off guard and blow it open.
—Seamus Heaney, “Postscript”

When Seamus Heaney died in a Dublin hospital last summer, his death plunged Ireland into a depth of grief unequaled on that island. The news was a sad west wind that did “catch the heart off guard,” the heart of a country. No other poet touched the people of Ireland, myself included, more deeply, more purely, more truthfully than Seamus Heaney.

I was in Ireland, sitting a few feet from the spot where I was born, when I learned the news. I was in the right place: near to the simple ways of life on small farms that he honored and elevated with his clear words. It was a great comfort to be there as the people of Ireland honored him. Michael D. Higgins, who is a poet and the president of Ireland, wept as he declared that Heaney’s contribution “to the republic of letters, conscience and humanity was immense.” Prime Minister Enda Kenny proclaimed: “For us Seamus Heaney was the keeper of language, our codes and our essence as a people. Today, it would take Seamus Heaney himself to describe the depth of his loss to us.”

After Heaney died, aching words of sorrow flooded the country. The newspapers, in a novena of acknowledgement, went on for nine days with long articles. Overwhelmed, I felt that I should not dare to write a word. But one day in talking with my grandniece, Emma, about children and traffic dangers, I said, “Seamus Heaney’s four-year-old brother was killed by a car, when he ran out on a little road in Bellaghy. Seamus wrote a poem about it.” Immediately, Emma remembered the poem, called “Mid-Term Break.” I quoted a line:

He lay in the four foot box as in his cot
No gaudy scars, the bumper knocked him clear.
And Emma finished: A four-foot box, a foot for every year.
Emma is 9. I thought to myself, if she can add her bit to a worldwide eulogy, I can add my own.

Heaney was born on a farm called Mossbawn, the oldest of seven sons and two daughters of Patrick Heaney and Margaret Kathleen McCann. When he was 13, the family moved to a farm in Bellaghy, County Derry. His father was a farmer and a jobber who bought and sold cattle. At 12, Seamus won a scholarship to St. Columb’s College, a boarding school in the City of Derry. In 1953, he was in his second year when his brother Christopher was killed. He came home for the wake and funeral. Many years later he wrote, “Mid-Term Break,” in which he recalls seeing his brother’s lifeless body for the first time.

His first book of poetry, Death of a Naturalist (1966), contains, besides “Mid-Term Break,” “Digging,” which is known to millions of readers. He writes as he hears the sound of his father’s spade digging below his window, recalling the hard work of hardworking men digging “for the good turf.” Then the poet writes:

But I’ve no spade to follow men like them.
Between my finger and my thumb
The squat pen rests.
I’ll dig with it.

And dig he did, and made a living from it. He produced 12 volumes of poetry and other literary works as well. He was a weaver of words, choosing them with care and reverence, and transforming them into gems by the brilliance of the way he arranged them. In 1995, he was awarded the Nobel Prize for Literature for “works of lyrical beauty and ethical depth which exalted everyday miracles and the living past.”

All “the fuss,” as he called it, did not change this down-to-earth genius. On receiving the Nobel Prize, he said, “It’s like being a little foothill at the bottom of a mountain range, you just hope you live up to it.” He was a professor of poetry at Harvard University for 21 years—but wrote no poems there! “No moss on the stones here,” he said. Besides Harvard and Oxford, he taught at Berkeley and Bellaghy Teacher Colleges in Belfast and Dublin. He was the perfect teacher, telling students what influenced him: the sound of words in litanies and recitations, even the sound of the beautiful words in the litany of the Blessed Virgin Mary at the family rosary: Tower of Ivory, House of Gold, Ark of the Covenant, Gate of Heaven, Morning Star.

“The poet,” he said, “is on the side of undeceiving the world. Poetry tries to help you to be a truer, purer, wholer being.” And he told them, “The main thing is to write for the joy of it.”

His poem “Requiem for the Croppies” touches on the tragic losses suffered by the Irish people in the 1798 insurrection for independence. Here are a few lines:

The pockets of our great coats full of barley—
Terraced thousands died, shaking scythes at cannon.
They buried us without shroud or coffin,
And in August—the barley grew up out of our grave

This poem inspired the peace monument that parishioners at Sacred Heart Parish in Camden, N.J., one of America’s poorest cities, erected in 2009, at a busy intersection near our church. I was honored that they’d chosen it to mark the golden jubilee of my ordination. (I serve as pastor there.) The monument is eight feet high, a huge open seed with the kernel, PEACE, in large letters within it. The base is the earth with barley growing up, and hands reaching up out of it to broken weapons.

“I am moved to know that ‘Requiem for the Croppies’ figures in the peace monument,” Seamus Heaney wrote to us.

Heaney’s last words were written in a text to Marie, his wife, moments before he died: Noli timere (Don’t be afraid). It is good advice for those of us still on this side of the grave. This past fall, I made the journey to St. Mary’s Church and its graveyard, where he lies under the fresh green sod of Bellaghy. His grave is in a corner, under an ash and a sycamore tree. An old wall on two sides has ivy on the unmortared stones, holding their own. It is near the tombstone of Christopher and his parents. I poured blessed water from the Sacred Heart church in Camden on his grave, which will be a destination of inspiration for centuries. It is a place to recall his words:

History says, don’t hope
On this side of the grave.
But then, once in a lifetime
The longed-for tidal wave
Of justice can rise up,
And hope and history rhyme.