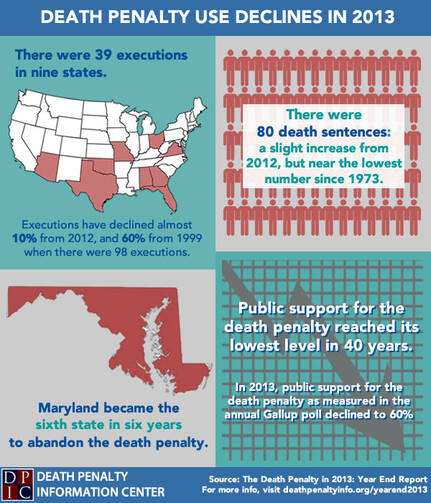 In 2013 the use of the death penalty continued its steady decline by almost every measure, according to a report released today by the Death Penalty Information Center. Executions in the United States dropped by about 10 percent from 2012, from 43 to 39, “marking only the second time in the past 19 years their number was below 40.”

“Twenty years ago, use of the death penalty was increasing. Now it is declining by almost every measure,” said Richard Dieter, DPIC’s Executive Director and the author of the report. “The recurrent problems of the death penalty have made its application rare, isolated, and often delayed for decades. More states will likely reconsider the wisdom of retaining this expensive and ineffectual practice.”

Executions in 2013 were carried out in 9 states, the center reports, with 59 percent occurring in Texas (16) and Florida (7). Most death penalty states had no executions in 2013 or 2012. The DPIC reports that the number of new death sentences was also near its lowest level since the death penalty was reinstated in the 1970s. With less than two weeks remaining in 2013, according to the report, there have been 80 new death sentences, three more than in 2012, and far fewer than in 1996, when there were 315.

According to the annual survey, the number of people on death row also showed a continuing decline. As of April 1, 2013, there were 3,108 inmates on death rows across the country, compared to 3,170 at the same time in 2012. The total population on death row has decreased every year since 2001, according to the DPIC. In 2000, 3,670 inmates were under sentence of death.

At least 33 cases with execution dates received stays in 2013. Although no clemencies were granted, Alabama posthumously pardoned three of the Scottsboro Boys, who were sentenced to death in 1931. The legislature and governor agreed that grave injustices had occurred when 8 young black men were convicted of raping 2 white women.

The number of death sentences in 2013 represents a 75 percent decline from the peak of the mid-1990s. Florida (15) and California (24) provided almost half of the death sentences this year. Many prominent death penalty states in the south, including South Carolina, Virginia, Tennessee, and Louisiana, had no death sentences. For the sixth year in a row, Texas (9) had fewer than 10 death sentences, a stark difference from 1999, when it recorded 48. Other leading states with death sentences in 2013 were Alabama (5), Ohio (4), Pennsylvania (4), Arizona (3), Indiana (3), and Missouri (3). Fifteen states imposed at least 1 death sentence in 2013, compared to 18 in 2012.

Beyond the declining figures related to executions, fewer states in 2013 even maintained a death penalty. Maryland became the latest state to repeal the death penalty (for future offenses), as the number of states that used capital punishment decreased to 32. According to the DPIC, in 2006, 38 states still retained the death penalty. “Since then, there has been a 50 percent increase - from 12 to 18 - in the number of non-death penalty states. Thirty states, plus the District of Columbia, the federal government, and the U.S. military, have not had an execution in over 5 years.” Six states in six years have abandoned capital punishment: Maryland, Connecticut, Illinois, New York, New Jersey, and New Mexico.

"We must lift up the dignity of all human life—even for those convicted of the worst crimes—and work to transform our culture so that it respects the inherent dignity and value of all people," said Bishop Blaire, then the chair of the U.S. bishops' Committee on Domestic Justice and Human Development, approving Maryland's May 2013 decision to end the use of the death penalty. "Americans are beginning to realize that we can do better than the death penalty both to punish crime and keep our society safe. We welcome the decision by the Maryland legislature and Governor [Martin] O'Malley to abolish the use of the death penalty in Maryland. This is a courageous step toward a culture of life."

Public support for the death penalty as measured in the annual Gallup poll declined to 60 percent, its lowest level in 40 years.

Kevin Clarke
@ClarkeAtAmericaclarke@americamedia.org
Show Comments (
1
)
Comments are automatically closed two weeks after an article's initial publication. See our comments policy for more.
Dudley Sharp
8 years 11 months ago
The Real Reasons Death Penalties/Executions Fell Dudley Sharp Nationally, from 1993 to 2012, murders dropped by 41%. Capital murders, the only ones eligible for the death penalty, likely, dropped in the 60-70% range, as capital murders are, most often, those combined with rape, robbery, or other crimes, which have dropped substantially, as well, explaining most of the drop. Other reasons are: 2) 5 states, with Democratic Governors and Democratic majority legislators, abolished the death penalty and 3) a number of Supreme Court cases have restricted or delayed, even more, the application of the death penalty, with both since 1994 and both in conflict with the majority will of the people. (A state appellate court vacated New York's death penalty statute). Two of those states, Illinois and New Jersey, got the vote in during a lame duck session. 4) DA's are aware that some judges are, simply, obstructionists to the law, and those DA's may be reluctant to seek it, as in Pennsylvania, Connecticut, New Jersey, etc. In California, reform efforts are underway. (Ct & NJ repealed the death penalty). Those four, likely, account for 90% of the drop in death sentences. 5) The decline in executions is, solely, the product of the case managers - the judges and has nothing to do with popular death penalty support (1). THE ANTI DEATH PENALTY NONSENSE Richard Dieter states: "I think the decline begins with the revelations about mistakes in capital cases — that innocent people could get the penalty and almost be executed has shocked the public to the point where death sentences are harder to obtain,". This is typical anti death penalty drivel, with no evidence to support it. A Nov. 2010 Angus Reid poll showed that a large majority, 81%, believes that innocents have been executed and, with that same group, responding to the "general" death penalty question, found 83% death penalty support and 13% opposition (2). That shows no evidence that the US population has turned away from executions based upon the, largely, misleading innocence claims by anti death penalty folks (3). Possibly 25-40 actual innocents have been sentenced to death and released since 1976. Not 143 (3). That is a 99.6% accuracy rate in convictions, with the 0.4% innocent being released - a very admirable record, which would fuel confidence. There is no proof of an innocent executed in the US. at least since the 1930s. The facts tell us that the death penalty is a greater protector of innocents, than is LWOP (3), a reality which would result in even more support for the death penalty. 1) Judges Responsible for Grossly Uneven Executions http://prodpinnc.blogspot.com/2013/11/judges-responsible-for-grossly-uneven.html 2) US Death Penalty Support at 80% (now 86%): World Support Remains High 95% of Murder Victim's Family Members Support Death Penalty http://prodpinnc.blogspot.com/2012/04/us-death-penalty-support-at-80-world.html 3) The Innocent Frauds: Standard Anti Death Penalty Strategy and THE DEATH PENALTY: SAVING MORE INNOCENT LIVES http://prodpinnc.blogspot.com/2013/04/the-innocent-frauds-standard-anti-death.html