Death from Behind a Desk: 'Grounded' explores a new kind of war-making. 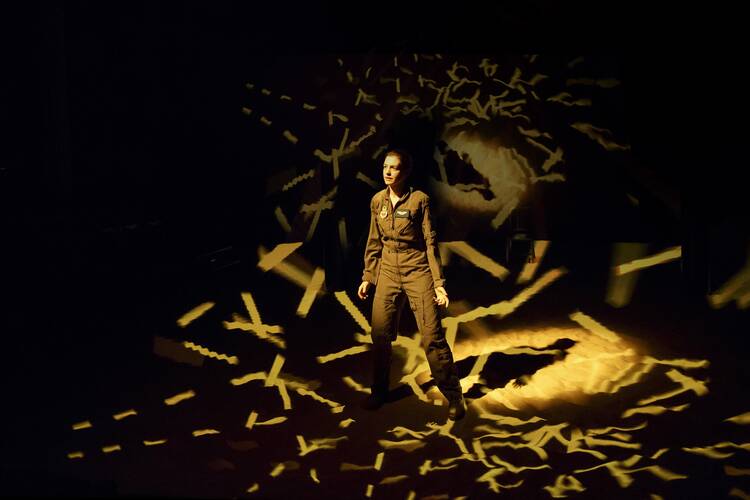 With every fresh “advance” in the science of war, with every new innovation in the means of destruction, the thing that makes it so attractive to those who employ it is precisely what makes it not only mortally threatening to the other side, but morally troubling for humanity. From archers to aerial bombing, the cutting edge of fighting technology has always been as much defensive as offensive, aiming as much to increase the ease and efficiency of killing as to lower the risk to the killer. The unmanned aerial vehicle, popularly and ubiquitously known as the drone, looks like not only the next step but the terrible logical conclusion to this unending arms race. Here, at last, we’ve invented a way to rain fire from the sky from the comfort of a desk, like an Olympian god delivering thunderbolts by carrier pigeon. It’s hard to imagine a starker, less symmetrical ratio of risk to “reward.”

In George Brant’s affecting if unsubtle new one-woman play Grounded, now at New York’s Public Theater in a high-profile production starring Anne Hathaway, this new meaning of “drone” comes to merge with another, more depressing connotation: that of the drudge, the lowly, faceless, timecard-punching laborer. If the notion of the military industrial complex once referred to the economy of armaments, and to their development and manufacturing as a disproportionately powerful political interest, what “Grounded” reminds us with blistering clarity is that warmaking itself can now be run on an industrial model. Not only our weapons are drones; our warriors are drones, too.

To this moral nightmare Brant adds another contemporary complication: His play’s protagonist is a woman, a former fighter pilot first grounded by an unexpected pregnancy, then by her country’s growing preference for conducting war by remote control. “No one ever comes back from the Chair Force,” she complains to the superior reassigning her to desk duty, but she soon takes a liking to the job’s unique mix of narrow, concentrated effort and risk-free firepower. Sitting at a simple chair but surrounded by Peter Nigrini’s immersive projection design, Hathaway’s desk-bound pilot stares into the sights of an omniscient screen and scans the frame for “military age males,” a.k.a. “the guilty.” Occasionally, though not as often she’d like, she gets to pull the virtual trigger and watch a silent grey explosion bloom.

This grim honeymoon is over quick, but what first starts to eat at this indoor warrior is the indoor part. Working from a trailer on Creech Air Force Base in the Nevada desert, Hathaway’s pilot makes a daily commute to her virtual battlefield, and it’s the constant wrenching back and forth from war to the home front with her husband and daughter that begins to take a toll. “It would be a different book, The Odyssey, if Odysseus came home every day,” she quips at one point. It turns out that she doesn’t just miss the uplifting expanse of “the blue” that was her workplace when she flew an actual plane; she also craves the boozy, after-hours camaraderie with her fellow pilots, most of them male. As Brant depicts it, piloting drones is strictly shift work, utterly atomized and, perhaps most eerily, as screen-based as the rest of our civilian lives; like all too many of us, Hathaway’s pilot comes home after a day staring at a screen only to unwind by staring at another with her husband. And there’s a bittersweet irony in the fact that just as women are beginning to join men on the front lines of modern warfare, we’ve found a new way to domesticate our wars.

It’s not just her on-off switch that starts to go haywire, though; the pilot in “Grounded” is ultimately undone, as in most war narratives, by a reckoning with who she’s killing and why. In hunting and vaporizing human targets on the other side of the world, in an endless intelligence enterprise that’s moved well beyond the quagmire of Iraq and even the casus belli of 9/11, is she really fighting to protect the husband and daughter she drives home to every night? And even if she were, how would she know? “Grounded” makes chillingly clear that her work has been as stripped of personal investment as a post on an assembly line or a line of computer code. And this is hardly just an indictment of her, or of U.S. drone policy, but of the routine inhumanity of our mechanized, monetized age.

Brant’s play, which has been making the rounds of resident theaters in the United States since its debut in 2011, is mostly well served by the Public’s lavish production, which has been directed, a bit overzealously, by Julie Taymor (“The Lion King,” “Spider Man: Turn Off the Dark”). Hathaway’s performance feels similarly effortful; the sight of those familiar brown eyes going blank, and that winning smile going cold, makes a haunting stage effect, but we’re seldom unaware of the self-mortifying effort she’s made to transform herself from a willowy screen waif into a gritty, salty just-one-of-the-guys gal.

Her celebrity does lend an extra frisson to the show’s closing moment, in which the theater’s house lights come up and her character turns our watchful gaze back on us. “You who watch me, who observe me watch my every move here even here and I know you watch me I know there is a camera somewhere for, everything is witnessed,” she incants, looking us directly in the eye. Brant wants to bring home the irony that our godlike ability to watch each other from anywhere, far from shielding us from danger, may ultimately make a kind of rough justice unavoidable. But to have a famous film actor, to whose image we more often turn for distraction than for a reality check, deliver us this home truth gives it an undeniable force. One thing about an all-seeing weapon is that, unlike the fighter pilot or the aerial bomber, we can now witness the damage we’re doing nearly as clearly as in the days of hand-to-hand combat. But do we choose to look?