In “Blackbird” and “The Crucible,” troubled relationships have tragic consequences. 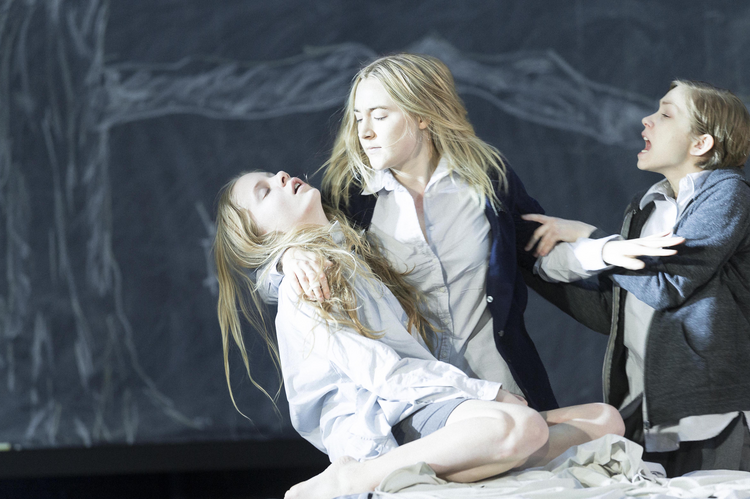 Hell hath no fury like a woman scorned, William Congreve once (almost) wrote, but on Broadway currently, it is young women, especially, whose spurning reaps a virtual whirlwind. In two productions—a revival of Arthur Miller’s 1953 classic The Crucible, and a 2005 play called Blackbird by Scottish playwright David Harrower—intimate transgressions among unevenly consenting partners have world-shattering consequences. And while both plays ultimately generate more heat than light around the large and small sins they consider, the intensity that animates both is reliably unsettling.

That’s because underlying the fever, and driving the plot, of each play is an inappropriate sexual relationship between an older man and a girl, and the central tension in both springs not only from the hovering threat of exposure but, more disturbingly, from the volatile, frighteningly untamed forces unleashed by thwarted female desire. Both Abigail Williams, in “The Crucible,” and Una, in “Blackbird,” have felt what they have thought of as love for the men who took advantage of them; and the betrayal of that tender feeling, as much as the violation of their bodies, is the wound they can neither forgive nor entirely heal.

In “The Crucible,” as we all know from our required high school reading, 17-year-old Abigail’s jealousy and hysteria metastasizes into a witch hunt in 17th century Salem, Mass., which ends up claiming many more victims than her intended targets: her one-time lover, the farmer John Proctor, and his wife, Elizabeth. Such is the terrible logic of a moral panic, in which the circle of assumed guilt always widens, accusations might as well be indictments, and resistance is worse than useless—it’s just more fuel for a fire that must be burned out before reason prevails.

But while Arthur Miller famously pressed the real historical trials of colonial Salem into service as an allegory for what he saw as the anti-communist hysteria of the McCarthy era, that resonance has receded. What we’re left with now is a play about a group of schoolgirls whipped into a preternatural frenzy that so terrifies the men in power that they turn on each other and their wives, in a descending spiral of recrimination and retribution. In 2016, in other words, it plays a bit like “Fatal Attraction” meets “The Bacchae,” marbled with thick layers of supererogatory speechifying about dignity and truth.

Directed by Ivo van Hove, this new production tunes into the play’s girls-gone-wild wavelength, setting the action entirely in a grim, fluorescent-lit classroom, dressing the cast in more-or-less modern clothes, and—most boldly—taking the girls’ pretense of demonic possession at face value. In this “Crucible,” the teen witches have real power: A body levitates, lightning flashes, winds roar, writings on a chalkboard swirl. Next to these special effects, the rest of the play, frankly, is a tediously preachy inquest, despite the fine efforts of an excellent cast, including “Brooklyn” star Saiorse Ronan as an icy Abigail, Ben Whishaw as a slow-burning John Proctor, and, most memorably, Bill Camp as the anguished inquisitor-turned-dissident Rev. Hale. As with his staging of Miller’s “A View From the Bridge” earlier this season, Mr. van Hove has found a bracingly fresh perspective on this canonical American playwright and, at the same time, managed to point up the bagginess of his writing.

At an intermissionless 90 minutes, and centered on just two main characters, Harrower’s “Blackbird” is considerably leaner and sharper; there is no allegorical overlay and little obvious moralizing. The twentysomething Una (Michelle Williams) has confronted a fiftyish man called Peter (Jeff Daniels) at his workplace with his former name, Ray, as well as with the reason for the new alias: He had a relationship with her when he was 40 and she was 12. While he did prison time and has ostensibly moved on, Una has had a far rougher time of it, spending her adolescence in the purgatory of shame and anger all too familiar to the sexually abused. Indeed, she is still clearly processing this trauma as she squares off with Ray across a conference-room table in his company’s awful breakroom.

She is also angling for something else from Ray—but what? An apology? A pound of flesh? A reset, even a rekindling of their romance? Her agenda is not clear from moment to moment, though in the course of the play she does break manage to break down Ray’s defenses and reach moments of queasy communion, heartfelt confession and reluctant attraction.

The playwright’s agenda, on the other hand, is quite transparent: to shift the ground under the play every 10 minutes or so, and thereby give his actors, and the audience, a kind of extreme emotional workout. It’s a skillful if somewhat spurious achievement, as the result of all these tectonic shocks is that the play’s moral and psychological landscape is distorted beyond recognition by the end. Harrower may want us to consider the troubling notion that Ray and Una’s relationship was somehow both abusive and genuine, and to interrogate the essence of the animal impulses we often exalt with the name “love,” but it doesn’t come off—perhaps partly because Williams’s jagged, jarring performance only exposes the play’s fault lines.

Daniels’s smoldering thaw, meanwhile, is a wonder to behold, and there’s no question that “Blackbird,” expertly directed by Joe Mantello, offers vivid sensations and provocative jolts, as roller coasters are meant to do. The play has been widely acclaimed and produced, and will soon be released in a film version titled “Una,” starring Rooney Mara. Like “The Crucible,” though, “Blackbird” derives its power from the dubious spectacle of young women lashing out, vengefully and ineffectually, at men in power. Perhaps we haven’t come so far since the time of the Puritans.